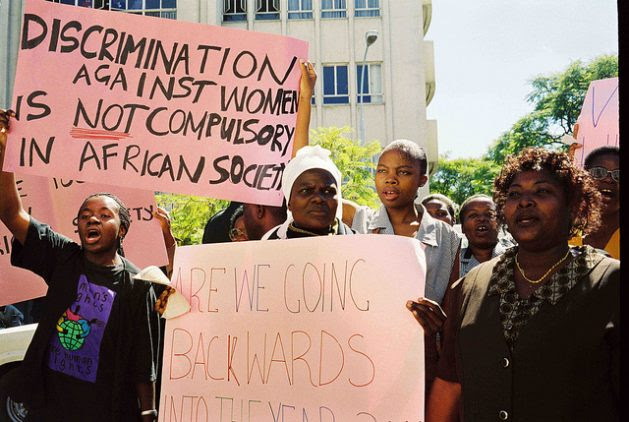 Women activists demanding a fair share of power. Credit: Mercedes Sayagues/IPS
UNITED NATIONS, Dec 9 2017 (IPS) - The space for civil society organizations is shrinking around the world, with particular impacts on women activists and human rights defenders who face additional barriers due to their gender or sexual orientation.
Civil society organizations (CSOs) and activists from around the world convened in Fiji over the last week to tackle some of the world’s most pressing challenges.
Two years before she was murdered, indigenous and environmental rights activist Berta Caceres said that it was her gender as much as her work that threatened her life.
Participants attended workshops and donned shirts saying “activism is the rent I pay for living on this planet” and “we will never give up on our beautiful planet.”
Among the challenges discussed is the rise in populism which has lead to restrictions in rights to expression and public assembly and thus actions taken by CSOs.
According to civil society alliance CIVICUS, only 2 of every 100 people live in a country with decent protections for civil society.
From Venezuela to Russia, state actors have put significant pressure on CSOs, preventing them from accessing foreign funding and registrations due to their role in defending human rights.
“When there is little or no support from government, the activist is in danger of discrimination and abuse by police and other authorities,” Pacific Women Advisory Board member Savina Nongebatu told IPS.
Human rights defenders (HRDs) have been increasingly subject to intimidation, harassment, and are at times killed for the work they do around the world.
Last year was the deadliest year ever recorded for HRDs with almost 300 killed across 25 countries, 49 percent of whom were defending land, indigenous, and environmental rights.
In addition to threats they face for their work, women human rights defenders (WHRDs) are frequently targeted because of their gender or sexual orientation, experiencing attacks that are traditionally perpetrated against women including rape, defamation campaigns, and acid attacks.

In August 2016, Turkish activist Hande Kader was brutally raped and murdered for her outspoken work in lesbian, bisexual, gay, and transgender (LBGT) rights.
Human rights later Bertha de Leon was subject to a sexualized smear campaign as photos circulated suggesting she had a sexual relationship with a judge who ruled favorably in a case in which she was involved in El Salvador.
Indian tribal rights activist Soni Sori who has been an outspoken critic of police violence towards her community was attacked with a chemical substance in February 2016.
Two years before she was murdered, indigenous and environmental rights activist Berta Caceres said that it was her gender as much as her work that threatened her life.
“We are women who are reclaiming our right to the sovereignty of our bodies and thoughts and political beliefs, to our cultural and spiritual rights—of course the aggression is much greater,” she said.
Analysts have found that the trend of closing civic space and restrictons to civil society often go hand in hand with the intensification of a fundamentalist discouse on national identity and traditional patricarchal values.
Such threats and actions work to silence WHRDs, limiting their resources and capacity to do work in already restricted civic spaces.
“When we have defenders with limited resources and capacity, the possibility of not being heard or consulted is high,” Nongebatu said.
“The ability to work and build partnerships rests squarely on the few women activists who may have learnt to work smarter from lessons learnt in their journey,” she added.
Such threats and restrictions do not stay isolated within borders, but are often brought over to international fora like the UN.
During International Civil Society Week (ICSW) in Fiji, former Prime Minister of New Zealand and former UN Development Programme Administrator Helen Clark noted UN’s continuous struggle to include civil society voices, reminding participants that the UN Charter begins with the words “We the peoples.”
“It doesn’t say we the countries or we the member states,” she said, adding that barriers to civil society participation often comes from member states.
“Not all member states like civil society very much…you just have to keep banging on the door and force it to respond,” Clark said.
LGBT rights have been particularly long contested at the UN. In 2016, Russia with the 57-member Organization of Islamic Cooperation (OIC) banned 11 LGBT organizations from attending a UN High-Level meeting on Ending AIDS.
And it was only recently that women were formally recognized for their role in climate action during the UN Climate Change Conference in Germany, kickstarting a process to integrate gender equality and human rights into climate action.
Nongebatu also told IPS of the “North and South divide” where larger civil society organizations take up more resources and space and urged for them to ensure that all women who work in human rights are consulted.
She also called on the UN to be inclusive of those in the Pacific Islands who often are unable to make the long journey to New York.
Despite the numerous challenges, Nongebatu remained motivated and asked women activists to stay determined.
“Intersection of all issues is inevitable!…The work we do is never done! Don’t give up! We need to keep fighting!”
This article is part of a series about the activists and communities of the Pacific and small island states who are responding to the effects of climate change. Leaders from climate and social justice movements from around the world met in Suva, Fiji from 4-8 December for International Civil Society Week.