Pakistan Gets Its First One-Stop Shop for Women Fighting Violence 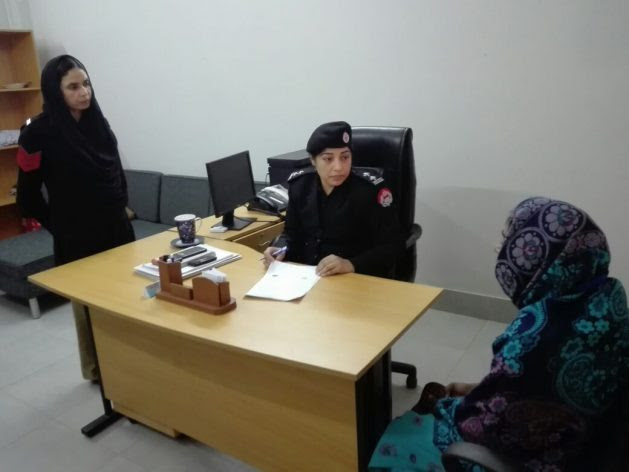 Station House Officer Nazima Mushtaq speaking to a survivor at the VAWC. Photo courtesy of VAWC
KARACHI, Dec 10 2017 (IPS) - Sliced noses, broken ribs, fractured fingers, slashed arms, bruised and bloodied faces with teeth missing and eyes swollen… Sana Jawed, 30, has been witnessing these brutalities for over a decade.
“You can never get over the physical and psychological mutilation that scores of women go through every day in our society,” says Jawed, who is currently managing the new state-of-the-art all-women Violence Against Women Centre (VAWC) in Multan, in Southern Punjab. Before this she was working in the Punjab government’s social welfare department and managing shelters for women across the province.
"We provide a fully functional police station, medical facility, forensic lab and legal aid as well as post trauma rehabilitation, all under one roof." --Sana Jawed
A 2011 Thomson Reuters Foundation expert poll found Pakistan to be among the three most dangerous countries for women, where they faced a barrage of violence from rape to murders in the name of honour. The other two were Afghanistan and Democratic Republic of Congo. On the gender equality index of the Global Gender Gap, Pakistan scored dismally, coming second lowest (143 out of 144). On a more recent Georgetown Institute for Women, Peace and Security‘s Women, Peace, and Security Index, Pakistan was ranked 4th among the worst countries for women to live in.
The VAWC has been set up in an agricultural belt which is particularly dangerous for the Pakistani woman, who are treated worse than cattle. It is the same region infamous for the Mukhtaran Mai gang rape case that shook the world and where after nine years of relentless pursuit for justice by Mai, five of the six accused were acquitted.
“In some villages, until just a few years ago, women were not allowed to wear any footwear. That meant they wouldn’t be able to walk with ease  around the village. If that happened, it would mean they would become more confident and not remain mere doormats. They would eventually find a tongue…and men certainly didn’t want that happening,” said Jawed.
Women, she said, are used as bargaining chips to settle family feuds, living in constant fear of being forced to marry, wedded in exchange, or punished for having spurned a marriage proposal. Even when married, she may find no peace or respect in her husband’s home where she may be punished at the slightest of provocation.
“Women have come to us with severe burns on their face, with scalding tea thrown at them,” said Jawed.
But all this is about to change and men will have to mend their brutal ways or face serious repercussions.
In what can only be termed as groundbreaking, the Punjab government has come up with a law to protect women. But unlike laws that have come with great fanfare and been forgotten just as quickly, this one comes complete with a mechanism for strict adherence to implementation.
The Punjab Protection of Women Against Violence Act (VAWA) passed in 2016 covers sexual, domestic, physical, economic, cyber, or psychological abuse.
To breathe life into the act, the Punjab government has set up what it calls a “one-stop shop” VAWC in Multan.
It began functioning in March this year with the aim of providing legal, medical and psychological counselling to survivors. 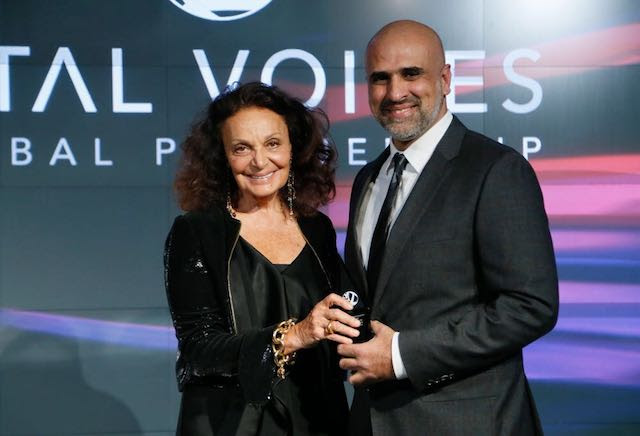 Salman Sufi with the fashion designer Diane Van Furstenberg. Photo courtesy of Vital Voices
“It was a conscious decision to open the first centre in Multan because women are the most vulnerable and meted with the most violent attacks there,” said Salman Sufi, the director general of the Punjab Chief Minister’s think-tank, the Strategic Reform Unit who drafted the law and who conceived of this centre.
“In the first six months since we opened the centre, we received over 1,000 cases from Multan district alone,” said Sufi. The number of violence-related cases is far more. Overall, in Punjab, according to data gathered by the Aurat Foundation, in 2017, of the 5,979 reported cases of violence, 178 were of women killed in the name of honour, 1,086 were raped/gang-raped and 1,626 were kidnapped.
“Even these over 1,000 cases are the tip of the iceberg,” said Sufi who was recently honoured with the Voices of Solidarity Award 2017 by Vital Voices Global Partnership, an organisation under the chairmanship of Hillary Clinton, in his pursuit to end VAW.

By March 2018, three more centres will start operating in other big cities of Punjab including Lahore, Faisalabad and Rawalpindi. “The idea is to eventually have one centre in each of the province’s 36 districts,” said Sufi.
Jawed explained that the VAWC aims to eliminate the lengthy process of registering a complaint about violence. “We provide a fully functional police station, medical facility, forensic lab and legal aid as well as post trauma rehabilitation, all under one roof.” In addition, there is a toll-free 24-hour help line where women can register any complaint of violence immediately.
“This is excellent and this will encourage more women to come and record their complaints,” said Sheraz Ahmed, programme officer at War Against Rape, a Karachi-based non-governmental organisation. Currently, the method in which sexual violence cases are handled in Pakistan at police stations and government health facilities is highly problematic, he said.
“This centre is ideal so that they do not need to go running from one place to another to get assistance, treatment, investigation and shelter,” said Maliha Zia, associate director at Legal Aid Society, adding: “If effectively run, it would cause a lesser degree of humiliation to the survivors.”
For the past ten years, WAR has noticed a discrepancy in the data it gathers from Karachi’s three public sector hospitals, which oscillates between 340 to 380 cases per year, and the complaints registered at the city’s police stations that come to not more than 110 in a given year. “That is because the woman or her family retracts either due to family pressure or the trauma that they have to go through before the case reaches the court,” he said.
“From the time a survivor enters the police station where she’s eyed and questioned by not less than four to five police officers and asked to repeat her story that many times, to the time she goes through medical investigation, valuable evidence is lost,” explained Ahmed. He said for a city of over 20 million, Karachi has only two female medico-legal officers (MLOs) and if the woman comes to the hospital after their duty hours, the delay may cause loss of solid evidence. The same sorry situation, he said, was found all over Pakistan, which has 14 female MLOs and the same misogynistic mindset at police stations.
Back in 2016, when the law for the protection of women was presented to the parliament, it was met with much irefrom the  religio-political parties as well as members of the legal fraternity who termed it “un-Islamic”. Many found it an affront to a male ego in this patriarchal country and insisted it would lead to breaking up families.
“We addressed each and everyone’s concerns but not a single clause was amended to appease anyone,” said Sufi, who found the furor caused by the law “exciting” and pointed to the fact that they were doing “something radical”.
The law seems to have everything covered — a monetary order ensures a woman’s earnings are safe and another order sees to it that the woman is not kicked out of the home by her husband or the family.
And yet, despite there being a series of “good legislations” that have been promulgated in recent past, Zohra Yusuf, a council member of the independent Human Rights Commission of Pakistan, says violence against women continues because of “weak enforcement” of those laws.
But more than laws that provide “potential tools for survivors”, Zia said until attitudes and bias inherent not only in society, but also within our institutions, change, VAW will continue. “There is social impunity and lack of recognition of many practices as VAW.”
To which Yusuf added: “Coupled with that is the misogyny that the administration and justice systems suffers from.”