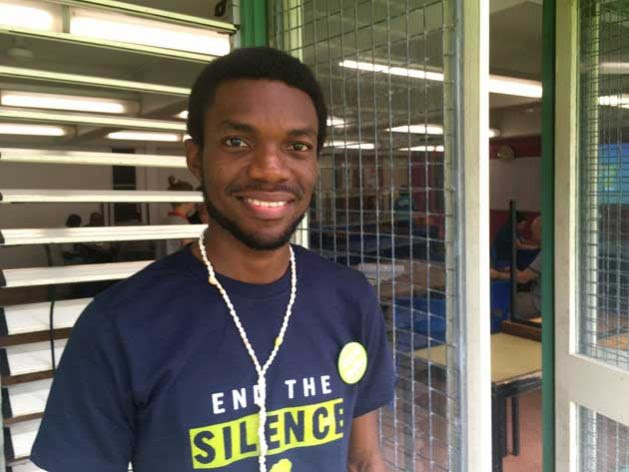 Victor Ugo dedicates the award he won to all Nigerians coping with mental illness. Credit: Pascal Laureyn/IPS
SUVA, Fiji, Dec 15 2017 (IPS) - They are young, smart and willing to take the rough road. Victor, Jubilanté and Khaled are independent fighters who speak out with a force that could possibly change the appearances of their countries, and beyond.
These ‘sparks of hope’ were awarded with the Nelson Mandela-Graça Machel Innovation Awards for their contributions to civil society. Nigeria, Guyana and Egypt already heard about them, the award will make their endeavors known internationally—and it’s high time to hear these inspiring voices.
Creating awareness for mental health in Nigeria. Motivating young creatives in Guyana to speak out using digital media. Defending human rights and freedom of speech in Egypt. These are some of the missions they have dedicated their lives to. Victor Ugo, Jubilanté Cutting and Khaled al-Balshy received the yearly award in Fiji last week.
The Nelson Mandela-Graça Machel Innovation Awards seeks to promote individuals and organizations for their excellence and bravery in creating social change. “They inspire compassion and empathy at a time of growing fear, xenophobia, and hate speech,” says Graça Machel, the former First Lady of South Africa.
During the International Civil Society Week (ICSW)— highlighting a conference organized by CIVICUS in Fiji’s capital Suva – the winners had the opportunity to capture a large audience eager to learn about their projects. The interest was overwhelming and often left them exhausted after the daily rounds of interviews and panel discussions. The fourth winner of the prestigious prize – the philanthropic Guerrila Foundation of Germany – was not present in Fiji.
Every year, CIVICUS – a civil society organizations alliance – brings the ICSW to another location to “promote and defend a more just and sustainable future.” Fiji hosted the 2017 event, highlighting the potential and problems of the Pacific.
Victor Ugo (Nigeria) – Best organization of civil society
Victor has the confident stride of a young man with proven achievements while walking from venue to venue at the conference in Suva. He shows no trace of the depression he once suffered from. He was diagnosed with the condition almost 4 years ago. And he was lucky, he got treatment. Most Nigerians who have psychiatric ailments never get help. 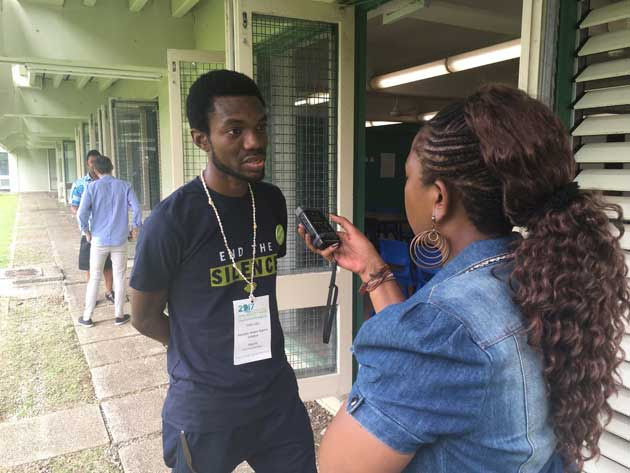 Victor Ugo patiently answers questions of interested journalists: “The award makes us more desirable.” Credit: Pascal Laureyn/IPS
“Mental healthcare is none existent in Nigeria,” explains Victor. “There is no knowledge. Not just illiterate people, but also university professors think that mental illnesses are caused by evil ghosts. Patients get punished for their disease.”
As a consequence of the stigma, mental health facilities are really poor. “There are only 200 psychiatrists in Nigeria, a country of 186 million people,” an exasperated Victor says. “And many of them go into banking because they can’t find a job.”
After his depression the young doctor founded the Mentally Aware Nigeria Initiative (MANI). Two years later, it has become Nigeria’s largest mental health organization. MANI combats the stigma, creates awareness and promotes services for mental health. “Most people don’t know the symptoms and that it can be treated.”
Therefor MANI encourages conversation on social media. Facebook, Instagram, Twitter and YouTube are platforms used for online campaigns on depression, bipolar disorders or bullying. “We explain how a depression feels like. We make people talk about it,” says Victor. Patients share their experience, family and friends can ask for help. “We try to find people who want to talk about it. We call them our ‘champions of mental health’.”
Media sometimes spread misconceptions about mental health or ignore it completely. “We correct the media so that it is understood that it’s about diseases,” the young man explains. “Suicide, for example. We teach the press how to report on suicides without encouraging it.”
MANI is also creating an online platform to link doctors to patients, like Uber does with drivers and passengers. When a patient asks for help, a therapist in the area is alerted. They can make an appointment after they agree on the price. The platform will be launched next year.
“Today, in villages, patients are still being flogged and chained because of traditional beliefs,” Victor sighs. The taboo needs to be broken. “The less stigma, the more people will ask for help. That will create a market that can encourage more students to become a psychiatrist,” says the hopeful award winner. He dedicates the award to all Nigerians coping with mental illness. “The award makes us more desirable. Everybody wants to join.”
Jubilanté Cutting (Guyana) – Youth Activist Award
At just 19, Jubilanté Cutting founded the Guyana Animation Network (GAN) to help empower young people with skills in digital media and animation. During the conference in Fiji, she was not only promoting the business model of GAN but also trying to inspire. When the stylishly dressed young woman engages in discussions on civil society, she easily impresses people with her enthusiasm and motivational calls to action. 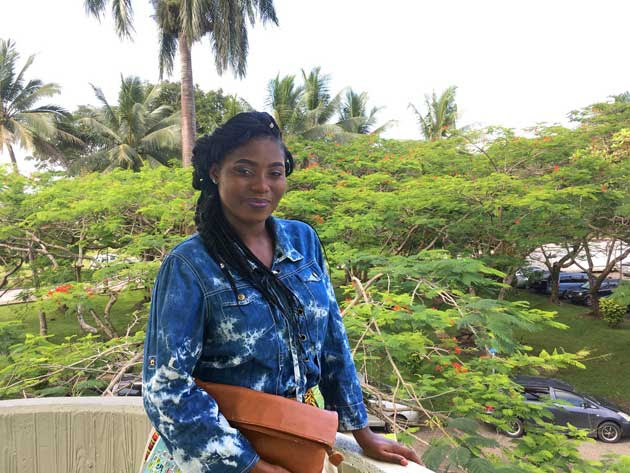 Jubilanté Cutting: “We help children to think out of the box, to learn something about themselves and express themselves.” Credit: Credit: Pascal Laureyn/IPS
“I got the spark when I was 17, at a workshop on art, technology and animation in Trinidad and Tobago. There I met many talented people who were pushing out Caribbean style media products. It was an explosion of talent, it made my creative juices flowing. Although I noticed quickly that I’m not very talented as an animator. But I do have a talent for networking, I decided to focus on that and help to develop Guyana’s digital and creative industries,” Jubilanté concludes.
Two years later, the young law student created GAN. In its first year GAN has reached than 3,500 people through summer camps, events, talks in schools and social media. The main purpose is to change a way of thinking. “Art is still seen as a hobby, not as a professional career,” says Jubilanté who taps her fingernails on the table out of frustration.
“But digital creatives can have a profitable career. If we could attach a price on creativity, many people would already be millionaires. We have to embrace creativity as more than just fun and teach people how to monetize it.”
And no better way to learn new skills and creative mind sets than to start at a young age. “Children are an important target for us,” Jubilanté points out. “Our society is ignoring the young ones. I use every forum I get to emphasize this. Children are born in the digital age. We have to learn them to use that technology in a responsible way. That’s why our organization opens its doors to children, because we acknowledge how transformational they are,” says the young woman.
Jubilanté tells enthusiastically what happened at one of her workshops. When teaching software to create digital graphics, the children aged 6 and 7 were quicker than the older ones to grasp the complicated tool. “Children are unafraid to learn, that’s critical for creative development. But books only teach them things in a structured way. We help children to think out of the box, to motivate them to learn something about themselves and express themselves.”
It took Jubilanté and her team of co-workers and volunteers a year to get the attention of the government. “We need more infrastructure, training and equipment to break the barriers for development. The Nelson Mandela-Graça Machel Award won us the recognition of the government and it draws attention to Guyana and the whole Caribbean. Now people know that something is happening there with digital media.
At her 21, Jubilanté is already a force that drives things forward on sheer will power. GAN is only one year old, but she is thinking big. “I want to spread the Caribbean culture. Everyone already loves Bob Marley and Rhianna. I will make them love Caribbean animation and promote our own artists.”
Khaled al-Balshy (Egypt) – Individual Activist Award
Khaled al-Balshy is a prominent human rights defender and journalist fighting to protect free speech. In Egypt, that is no easy job. The government has increasingly cracked down on the press and has become one of the world’s biggest jailers of journalists. In a nation where media are under constant attack, Khaled is struggling to defend freedom of the press.
The journalist is gifted with the calmness necessary to face hardship. Khaled knows all too well how an Egyptian cell looks like. He has a suspended 1 year sentence for harboring journalists wanted for expressing critical views. His news website al-Bedaiah is blocked. He was accused for “insulting the police” on social media. The courts have 10 pending cases against him. These are just a few of the harassments he has grown accustomed to.
“The situation in Egypt is one of the worst in the world. More than 12 journalists have been murdered in the last three years. More than 20 are in prison, some without clear accusations. Many others are being stopped from writing and publishing,” Khaled explains for the umpteenth time. He gives many interviews at the conference in Fiji, always with the same energy and indignation.
Known to be an ardent defender of press freedom, Khaled leads numerous initiatives for the detained and disappeared journalists. “I write about their cases. I visit their families. We organize meetings and we create groups that helps lawyers with the legal process.” Sometimes that leads to success. “When a journalist is released, we are happy. But only for a few minutes. Sometimes they have spent years in prison without a clear accusation.”
“This absurd dictatorship is feels threatened, why else would they imprison us?” Khaled continues. “They are afraid of us. When we write, we make a change. If we just tell the truth all the time, that change will come. We did this with Mubarak, we can do it again with al-Sisi,” says Khaled. “The only way to protect freedom of expression is to exercise it and to denounce the violations against it.”
“When I knew I won the Nelson Mandela-Graça Machel Award, I was sad for 3 days. I’m getting an award, while people are spending years in prison. My son convinced me that this award is for everyone, for the people I’m fighting for. It’s a message to the imprisoned journalists that their voices can break through prison walls.” The Tunisian translator wipes tears off her face when she repeats his words in English. Her country had a successful uprising, the one in Egypt has failed.
But Khaled has hope. He will continue to fight. “I want to make that change for my son, he is making me do this.”
This article is part of a series about the activists and communities of the Pacific who are responding to the effects of climate change. Leaders from climate and social justice movements from around the world met in Suva, Fiji, December 4 through December 8 for International Civil Society Week..