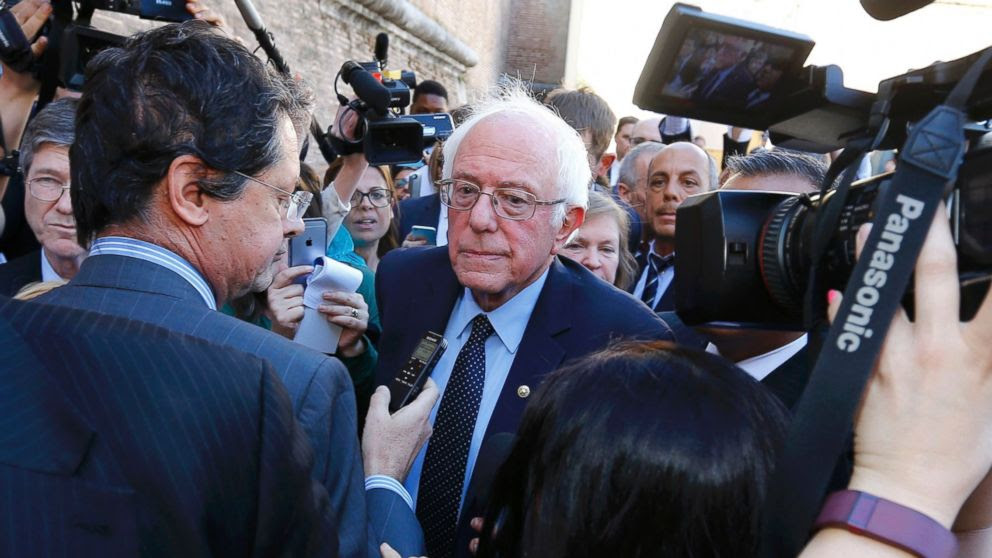 Cost-benefit ratio, all things considered.
Politics being at least as much about perceptions as reality, the calculated risk Sanders took by leaving the campaign trail just ahead of the New York primary for a whirlwind trip to Rome for a Vatican conference on economy and social justice probably paid off in the media coverage and the sense of gravitas it may have given the Democratic Socialist who has admired Pope Francis for years and quoted Catholic Social Teaching for decades.
Politico reports…
his appearance at a Vatican conference celebrating the 25th anniversary of an encyclical by Pope John Paul II to mark the end of the Cold War signaled his arrival as a globally respected voice on inequality and economic injustice, providing him with a stature that he couldn’t have imagined at the beginning of his long-shot presidential campaign. His message in the Eternal City was essentially the same stump speech Sanders delivers back home, only now it warrants a crush of foreign media attention, and puts the small-state senator in company with a pontiff he’s admired from afar for several years.
Saying it warranted a crush of foreign media attention creates that perception, merited or unmerited, as well as the much larger idea that Sanders is in the same league as Pope Francis. Then there’s this line:
In Rome, standing beside adviser Jeffrey Sachs — who helped arrange the trip — Sanders told reporters his interest in the pope’s politics is entwined with his policy thinking…
Popes don’t  have or ‘do’ politics. Their words, teachings and writings are cited by politicians though, and always selectively. The Politico piece notes the Vatican “is still starkly at odds with many Democrats”, but played up Sanders’ citations of Francis in campaign speeches.
The Pope was on his way to Greece and reportedly, there would be no meeting with Sanders and other participants of this gathering hosted by the Pontifical Academy of Social Sciences to commemorate the 25th anniversary of Saint John Paul II’s encyclical, Centesimus Annus, a gathering that included Bolivian President Evo Morales, another Democratic Socialist. But somehow, Sanders’ and Francis’ paths crossed.
The BBC reports the pope strongly discouraged anyone from reading politics into the encounter.
Pope Francis says a brief meeting with Democratic presidential candidate Bernie Sanders just “good manners” and not political interference.
They met early in the lobby of the Pope’s residence before he left to meet migrants on the Greek island of Lesbos.
“If anyone thinks that greeting someone is getting involved in politics, I recommend that he look for a psychiatrist,” Pope Francis added.
If anyone reading that reporting knows how unlikely it would have been that it was a chance encounter, it’s clear that someone, somehow arranged it. The fact that Sen. and Mrs. Sanders were staying at the Casa Santa Marta inside the Vatican walls was itself, interesting. As the BBC notes, it’s “the same guest house where the Pope lives.”He had been in the the Vatican to attend a conference on economy and social justice and stayed at the same guest house where the Pope lives.
For his part Mr Sanders said it was an “honour” to meet him.
“I think he is one of the extraordinary figures not only in the world today but in modern world history,” he told Associated Press news agency.
“I told him that I was incredibly appreciative of the incredible role that he is playing in this planet in discussing issues about the need for an economy based on morality, not greed,” Mr Sanders added.
Scholars at the Acton Institute suggest that, with Sen. Sanders’ interest in papal teachings on social justice, he should learn some lessons from Vatican documents and some papal teachings he cites.
At a very superficial first glance, and as Sanders himself has claimed, the Catholic Church would seem to support the candidate’s passionate quest for greater income equality and social harmony. Yet even his own supporters are blissfully unaware of what socialism is, and the nefarious means, as defined by the Italian theorist Antonio Grasmci, needed to achieve such objectives: the negation of private property, the traditional family and organized religion, especially Christianity. While socialists rarely mention these obstacles anymore, their overcoming remains necessary to achieve the socialist vision of a completely egalitarian society.
But the whole trip was rushed, as the Politico piece points out.
Everything about the trip was a hurried affair, from the questions raised about who exactly invited him to the finishing touches he put on the speech during his dead-of-night charter flight to Rome from New York.
Very little got reported about that. And only slightly more on what his rival, Hillary Clinton,was doing while Sanders was on his Vatican trip.
Just when we think this campaign season can’t get curiouser
- See more at: http://www.mercatornet.com/sheila_liaugminas/view/bernie-sanders-rome-adventure/17925#sthash.DaYUSlil.dpuf

Today we begin a series of four articles by Denyse O'Leary on an ancient practice which appears to have become in some quarters the mental equivalent of fast-food, hence "McMindfulness". Evidently there is a "market" for meditation, and the appeal of a method to calm and centre the mind is understandable in a distracting and distracted world. But not all methods are equally helpful, and, even if they were, being obliged to practice one of them -- either by the company CEO or the local school authority -- would surely be a dangerous thing. Anyway, that is the issue Denyse puts before us today.
Submissions on books about heroes of conscience have closed and we will present some results in a day or two. Thanks to those who contributed.