MercatorNet: ‘Penetrate to the Persian Gulf and as far as India’

MercatorNet: ‘Penetrate to the Persian Gulf and as far as India’

‘Penetrate to the Persian Gulf and as far as India’

Peter the Great would have approved of Putin’s recent exploits. 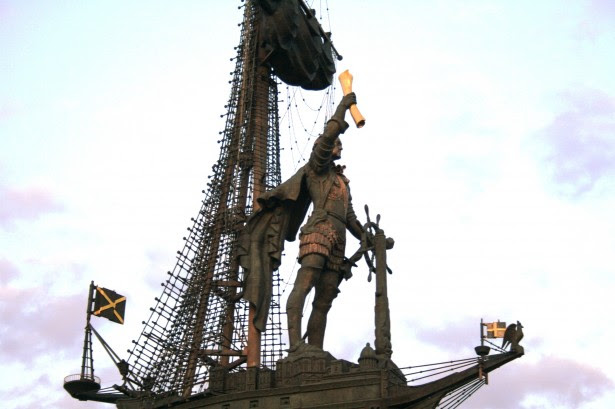 Statue of Peter the Great on the Moscow River
When Vladimir Putin sent troops into Crimea, many were outraged by his audacity. Likewise, after Russian warplanes and troops were sent to support Syrian dictator Bashir al-Assad, many world leaders objected. Yet seen through the prism of history, these decisions should not have been surprising.

Russia’s latest actions, the annexation of Crimea in Ukraine and current military intervention in Syria, could have left me scratching my head or fuming over the nerve of Mr Putin. Instead, they drove me to my history books for some light on the subject. They reminded me that geography explains a lot about the Russian bear. It certainly plays a role in these events.

Ukraine had made overtures to NATO, an alliance that would have threatened Russia’s control over the Black Sea naval base at Sevastopol. In the case of Syria, Putin was protecting Tartus, the only Russian naval base in the Mediterranean .To understand Russian behaviour, one must look beyond the immediate. The answers lie in the past.

Russia’s geographic realities are self-evident. With a land mass stretched across eleven time zones, the country is vast. Whether it is Arctic conditions or foreign invaders, the nation is exposed. Northern ports are frozen for months at a time. Ships plying the waters of the Baltic and Black Sea must navigate choke points at Skagerrak and the Bosporus. Even a Mediterranean fleet would be stymied by Gibraltar or the Suez.

Without unfettered access to the major shipping routes, Russia remains vulnerable. And the specter of catastrophic losses in World Wars One and Two lies heavy on the Russian mind. As Henry Kissinger noted, “Even paranoids have enemies.”

Peter the Great understood this challenge three centuries ago. He advised that “[Russia should] approach as near as possible to Constantinople and India. Whoever governs there will be the true sovereign of the world. … penetrate as far as the Persian Gulf, (and) advance as far as India.” To this end, Russia then began a program of expansion which continues to this day. Putin is simply the most recent leader seeking similar historical objectives.

Examine Sevastopol on a map. This warm water port is critical to maintaining Russia’s maritime independence. Without it, Putin’s options in the Crimea are limited. Seen in this light, annexation was both necessary and logical. He could no more abdicate control of the region than the United States could cede the Gulf of Mexico to a hostile alliance.

So too, Tartus. When asked, Vice Admiral Viktor Cherkov was succinct...“This base is essential to us.” And Putin’s most recent efforts in Iran might well provide access to the Persian Gulf. In each of these examples, the pattern remains the same. Putin’s actions are but transitional steps in pursuit of a larger goal. That end point is open water.

The Kremlin makes no effort to obfuscate. Russia’s future strategy was recently outlined in The Maritime Doctrine of the Russian Federation, 2020. Crimea and the Mediterranean are cited for continued  engagement. One imagines Tsar Peter reading through the document and nodding with approval. The objectives are the same. They should be. Each is predicated on the same geographic conditions he faced in 1725.

This will not occur immediately. Nor does it mean that the United States is faced with a fait accompli. Russia has a variety of other problems to address as well. But for the United States and the West generally to develop an effective policy, we must first grasp the underlying motivation for his actions. The issue is not Vladimir Putin, the man. It is Russian history. It is Russian geography. As before, Russian policy looks to the oceans for security.

History is not just another subject in the school curriculum; it is something that we should study throughout our lives. Without a firm understanding of history, it will be impossible to develop any effective strategy for the present and the future. “The bear in the woods” controls the Crimean peninsula. He has established a presence in Syria. He looks to Iran and the Arabian Sea. Does this sound familiar? It should. Peter the Great pointed Russia in this precise direction nearly three hundred years ago.

Claire Cullen is a retired history teacher. She lives in the United States.

“The Link Between Putin’s Military Campaigns in  Syria and Ukraine,” by Edward Delman. The Atlantic, Oct. 2, 2015

The Revenge of Geography: What the Map Tells Us About Coming Conflicts and the Battle Against Fate, by Robert Kaplan

Prisoners of Geography: Ten Maps That Explain Everything About the World, by Tim Marshall

The New Tsar: The Rise and Reign of Vladimir Putin, by Steven Lee Myers
- See more at: http://www.mercatornet.com/articles/view/why-russia-is-in-crimea-and-syria-a-history-lesson/17714#sthash.ymItnpXI.dpuf

It's good to put immigration problems in perspective. Below Marcus Roberts reports that Jordan's population has nearly doubled in size in the past 10 years because of immigration. About 2.9 million of the 9.5 million people in the kingdom are refugees. Social change because of migration is a problem everywhere, but spare a thought for countries like Jordan and Lebanon where the influx of strangers is putting a gigantic strain on the economy and political life.