MercatorNet: The making of men

MercatorNet: The making of men

The making of men

Few people have known more about how to develop the character of youth than Cardinal Newman. 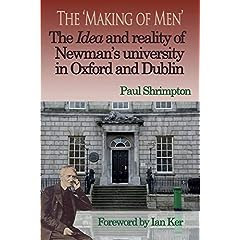 Today we have lost sight of what a university education should be about. It is seen as a strictly utilitarian process, imparting specialist knowledge for a future career. In a society where all beliefs are seen as relative and where young people are more worldly and sophisticated than ever before, tutors and lecturers feel no responsibility towards their students outside the lecture hall or seminar.

Yet this privileged period between leaving school and starting work is clearly a critical time for the young, a brief but intense space when, alongside the friendships they make with their peers, one would assume they might also require encouragement, direction and guidance from senior staff.

Even to suggest this notion is to be regarded as either entirely unrealistic or impossibly old-fashioned. Yet a gifted scholar, teacher and theologian in the middle of the 19th Century gave the subject of how to help form the next generation of men (higher education was not accessible to women until the latter part of the 19th Century) a great deal of serious thought and practical energy. This was Cardinal John Henry Newman.

The title of Dr Shrimpton’s sympathetic and scholarly study of Newman’s vision and practice of higher education, says it all. Newman, with his deep understanding of human nature and his instinctive sympathy for the aspirations and volatility of the young, recognised that reading for a degree is not merely about stretching the mind or fitting a candidate for a future career; it is also, or should be, about forming the moral and spiritual character of students. Academic studies are a necessary part of such formation but by no means the whole of it.

The author, who spent nine years researching this book alongside his full-time work for the last 28 years as a maths teacher at Magdalen College School, Oxford, argues that Newman’s administrative and practical gifts should be given their rightful place alongside his more celebrated writings. During the four years, from 1854 to 1858 when, single-handedly and under a colossal work-load, he undertook the task of starting a Catholic University in Dublin, Newman demonstrated the full range of his abilities: formulating his theories about the function and purpose of a university education in a series of lectures in Dublin in 1852, as well as house-buying, raising money, interviewing prospective tutors and lecturers, organising faculties and syllabuses and all the other minutiae necessary to starting an institution from scratch.

Newman’s industry, patience, capacity to work under pressure and in the face of many obstacles as described and examined in this book, was extraordinary. It also challenges those who are inclined to view him as an influential theologian and educational theorist rather than as the rector of a new university who also acted as head of one of its residential houses, having to oversee the staff, pacify the cook, buy the furniture and lay down rules for its lively and sometimes idle undergraduate residents.

Shrimpton quotes the late Roy Jenkins, a former Chancellor of Oxford University, who confessed that Newman’s famous work, The Idea of a University, left him unsatisfied: “Newman had mostly held me spellbound in the grip of his prose, but he had convinced me neither that he had a practical plan for an Irish university in the 1850s or that he had left guidelines of great relevance for a university of any nationality or any or no faith today.” It is a pity Jenkins is not alive to read this book which shows how carefully Newman had laboured on the practical side of founding a living institution and also how relevant his views are today, when senior staff at universities have little sense of a responsibility towards students other than preparing them to pass exams.

For Newman, the pastoral dimension of university life, the relationship between a tutor and his charges, was central to its proper flourishing. When he himself had been a young tutor at Oriel College, Oxford, along with likeminded friends he had redefined the role of tutors as fraternal, older guides and mentors of their students. As a curate in St Clements, in a sermon preached before his 25th birthday, he had stated that “All education should be conducted on the principle that it is a means to an end, and that end is Christian holiness.” He did not mean a seminary-type institution but, developing his ideas years later, “a place to fit men of the world for the world”, able to take their place as mature citizens, aware of their responsibilities towards society.

Newman’s ideas had also been influenced by his own Oriel College tutor, Whately, who used to ask his students, “Shall I form your mind, or cram you for a First?” The implication, that developing the capacity for intellectual discrimination is more important than merely cramming for an examination, was later reflected in Newman’s comment that, broadly speaking, “residence without Examinations comes nearer to the idea of a University than examinations without residence.” For him, as Shrimpton explains, students’ residences, where and how they lived their lives outside the lecture halls, mattered as much as their studies.

Newman also understood the wider importance of fraternisation, writing that “When a multitude of young men, keen, open-hearted, sympathetic and observant, as young men are, come together and freely mix with one another, they are sure to learn from one another, even if there be no-one to teach them...they gain for themselves new ideas and views, fresh matter of thought and distinct principles for judging and acting, day by day.”

The phrase “making of men” was used by Newman the night before the Catholic University in Dublin was inaugurated, when addressing its first 17 students. He told them that they had not come to the university to become engineers, doctors, businessmen, soldiers or bankers – they could do that elsewhere – but to be “made men.”

This fine book, based on his letters and reports, prospectuses, minute books and a wealth of other documentation, shows how Newman’s genius turned this inspiring ambition into reality, if only for a brief period. Written for the general reader, it presents him as a great modern Christian humanist whose vision of what a university could be offers a formidable challenge – and reproach - to the current impoverished understanding of the purpose of higher education, reflected in large, impersonal campuses where students barely connect in a meaningful way with those who teach them and who, away from home for the first time in their lives, are left to sink or swim, flourish or struggle by themselves.

Francis Phillips writes from Buckinghamshire, in the UK.
- See more at: http://www.mercatornet.com/articles/view/the-making-of-men/15821#sthash.gH0Z0Ty8.dpuf

The annual Oscars ceremony is a bit like a high school prize night. They always go on too long and the speeches are always filled with cliches. The winners, so effortlessly articulate on-screen, turn into stuttering, bashful kids on the stage.
There is always a controversy and this year's centred on the lack of racial diversity amongst the actors who were nominated. None of them were people of colour. But there was another theme running through this year's presentation: victimhood. Many of the films were about scarred survivors and Lady Gaga's song, "Till it happens to you", celebrated them. Was this a healthy message for viewers in the United States? See the article below.