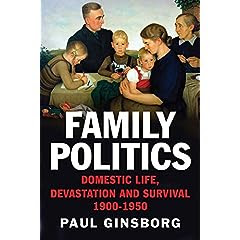 The author, Professor of Contemporary European History at the University of Florence, has produced a reflective and wide-ranging study of an area often neglected by historians. Ginsborg has chosen for his analysis the history of family policies and family politics in five nation states during a period of huge upheaval and change: Russia, moving from her imperial past to the Soviet Union; Turkey, from the demise of the Ottoman Empire to a modern republic; Italy, from a fragile Liberalism to Fascism; Spain, before, during and after the Civil War; and Germany, from the failure of the Weimar Republic to National Socialism.

It is a large canvas, as the author admits; necessarily selective of material available, he is also candid as to where his prejudices and his heart lie: with all those ordinary families, clinging tenaciously to normality under abnormal circumstances forced on them by the whim of those in power.

“All these regimes attempted to mould and manipulate family life” he points out, charting the suffering endured by millions of families during the time-span discussed; but also suggesting in his conclusion that the family unit is too ancient, strong and flexible to be destroyed, even though, as under Stalinism, the attacks on it were formidable, sustained and widespread. The dictatorships of Stalin, Ataturk, Mussolini, General Franco and Hitler all recognised, in different ways, the importance for society of obedient and traditional families.

Heartbreaking problems arose for those groups of people and communities who, through no fault of their own, found themselves on the “wrong side” of government ideology: republican families in Spain after Franco’s victory; “bourgeois” families in Soviet Russia; Jewish and gypsy families in Nazi Germany; Armenians in Turkey and so on.

Ginsborg explains why the devastation of families was far greater in Russia than in the other regimes. Many factors contributed to this, such as the terrible conditions endured by the Russian peasantry during and after the Russian Revolution and as a consequence of the First World War; and the disease, famine and slaughter that followed the Civil War, in which violence and terror caused a total death toll of perhaps eight million. Before this, in pre-revolutionary Russia, the future “proletariat” was enduring life in “the hovels of St Petersburg [where] men and women were divided by grinding poverty, by impossible hours of work and by constant exhaustion and ill-health.”

The tragedy that unfolded in Russia continued under Stalin. We learn that between 1929 and 1953, 18 million Soviet citizens passed through the Gulag system leaving gaping wounds and absence in every family. Even before this deliberate terrorisation the number of abandoned children in Russia in the early 1920s was staggeringly high: between four and seven million. Their fathers had died in the war, their mothers, struggling in vain to keep their families afloat, succumbed to disease or starvation; state resources though aware of this tragedy, were simply overwhelmed by its scale. The emerging Soviet state brought its own relentless undermining of the family; writer Walter Benjamin, commenting from Moscow in 1926, wrote that “the tensions of public life...are so great that they block off all private life to an unimaginable degree.”

Ginsborg writes that he has included Turkey – rather an odd choice to include in a European survey - in this study under the influence of his Turkish wife. Under Mustafa Kemal, later to style himself “Ataturk” – “Father of the Turks” - who forcibly modernised his country when he and other “Young Turks” took control of Turkey after WW1 - women’s education and rights were championed, although this went alongside the implicit assumption of a male patriarchal society. Kemal envisaged the new Republic’s family structure as “a nuclear and monogamous unity, a secure “nest” which would serve as the primary cell in the life of the new nation.” This proved a surprisingly workable and enduring model - as long as you were not from a minority group such as Armenians or Kurds. The Armenian genocide of 1915, the result of the ruthless nationalism espoused by the Young Turks after the collapse of the Ottoman Empire, has never been formally acknowledged by Turkey. Despite its many failings, Ottoman rule had allowed a wide margin of toleration for the huge variety of races under its control. Istanbul, before WWI, had been a cosmopolitan, international city in which Turks, Greeks, Orthodox, Armenians and Kurds had all lived together.

The regime least destructive of family life during this period was Italy. The influence of the Catholic Church remained very powerful under Fascism; as Ginsborg observes, Italian family culture was strong; its social and political anthropology was very different from that of Germany; “it was Catholicism rather than Fascism that dictated the terms of Italian family politics in this period.” Mussolini’s vision of Italy’s future, with its characteristics of speed, modernity, a strident virility, hatred for the past, anti-clericalism and belligerence might have been attractive to sections of the younger generation but it did not resonate with conservative Italian family life as a whole. Unprepared when their country was dragged into WW2 and angry at being duped into war-mongering by “Il Duce”, the Italians turned against Mussolini and his power quickly collapsed.

In his book Ginsborg includes a thought-provoking study of the unhealthy family environment which seemed to nurture the dictators he is studying: “A highly unsatisfactory father-figure and a devoted mother are the necessary, if not sufficient, familial conditions for forming a dictatorial personality, one ready to affirm in violent fashion his own individuality and masculinity.” He accepts that Mussolini, who admired his own brutal father, does not entirely fit this pattern: “In the wretched gallery of 20th century dictators’ fathers, Arnaldo Mussolini emerges as the best of a bad bunch.”

Only General Franco, faithfully married for 50 years, is described, reluctantly, as “a good family man”. Ginsborg is highly critical of Franco and, although accepting that both sides in the Spanish Civil War committed atrocities and that the massacre of clergy and nuns by anarchists in 1936 “can never be forgotten”, he makes it clear that the mass slaughter on the nationalists’ side, which continued years after the civil war ended, was much greater than that of their opponents.

Generally Ginsborg is critical of the position taken by the churches, especially the Catholic Church, in Germany and Spain during this period. In particular, he censures the Church in Germany for not protesting loudly enough against the Nazi euthanasia programme for the mentally ill, the elderly and the handicapped during the 1930s, and the Spanish bishops for their silence about the atrocities committed by nationalist soldiers during the African campaign. The Church, he also believes, failed by not speaking up on behalf of the rights and needs of all families rather than its own Catholic constituency. He does not discuss the help given by Pius XII to Italian Jews during the War although he does concede that there were many instances of individual courage.

Certain political commentators are cited by Ginsborg with approval, such as the Italian Antonio Gramsci, who, unlike other Marxist theorists, championed the importance of traditional families in the rearing of children. He also highlights the role of some prominent women of the period, such as Alexandra Kollontai in Soviet Russia, Halide Edib in Turkey and Magda Goebbels in Germany, all of whom were representative of a certain kind of nascent feminism, educated, politically aware and seeking a public platform.

The German-Jewish philologist and celebrated diarist, Victor Klemperer, is quoted, in particular for his reflections on how Nazism could have happened: “And ever more puzzling, despite Versailles, unemployment and deep-seated anti-Semitism, ever more puzzling to me, is how Hitlerism was able to prevail?” Ginsborg comments, “We have been seeking answers to these questions ever since.”

Not least among the poignant features of the book are the many photographs, propaganda posters, sculpture and paintings the author has included. Often these graphic and imagined groupings summarise the zeitgeist of a country – or the ideology perpetrated by its dictators - better than words.

“Listening to a talk by the Duce” c. 1939 by Italian artist Mario Biazzi, shows a gloomy family group, half-transfixed, half-distracted, with Mussolini’s profile hovering over them like a malign spirit; “Worker and Kolkhoz Woman” 1937, by the Russian sculptress, Vera Mukhina, depicts the triumph of the Soviet labouring class; most potent of all, shown on the book’s dust jacket and chosen by Hitler to hang in the Chancellery, is “Peasant Family from Kalenberg” 1939, by Adolf Wissel, depicting a solemn family group of three flaxen-haired “Aryan” children, their parents and grandmother, in a manner both sentimental and ominous.

“Yes” Ginsborg seems to be saying, “The concept of the family will survive – but at the expense of millions of individual families during this period who are doomed to be destroyed.”

Francis Phillips writes from Buckinghamshire in the UK.
- See more at: http://www.mercatornet.com/articles/view/family-politics-domestic-life-under-20th-century-dictators/15936#sthash.Sb91FcDy.dpuf

The annual Oscars ceremony is a bit like a high school prize night. They always go on too long and the speeches are always filled with cliches. The winners, so effortlessly articulate on-screen, turn into stuttering, bashful kids on the stage.
There is always a controversy and this year's centred on the lack of racial diversity amongst the actors who were nominated. None of them were people of colour. But there was another theme running through this year's presentation: victimhood. Many of the films were about scarred survivors and Lady Gaga's song, "Till it happens to you", celebrated them. Was this a healthy message for viewers in the United States? See the article below.