270 Million People are Migrants, Who Send Home a Staggering $689 Billion 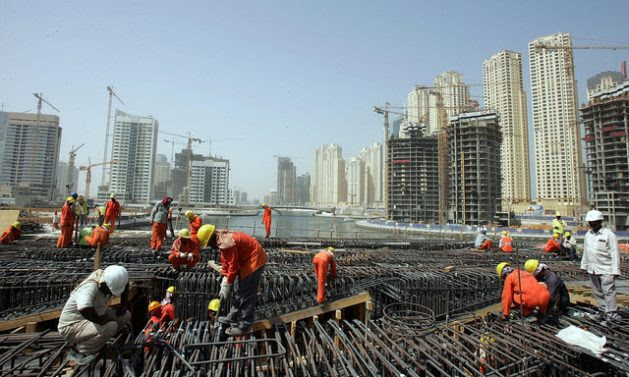 Pakistani migrant workers build a skyscraper in Dubai. Credit: S. Irfan Ahmed/IPS
UNITED NATIONS, Nov 27 2019 (IPS) - The number of international migrants in 2019 is now estimated at 270 million and the top destination remains the United States, at nearly 51 million, the UN migration agency said on Wednesday.
In its latest global report, IOM noted that the overall figure represents just a tiny fraction of the world’s population, although it is a 0.1 per cent increase on the level indicated in its last report, published two years ago.
“This figure remains a very small percentage of the world’s population (at 3.5 per cent), meaning that the vast majority of people globally (96.5 per cent) are estimated to be residing in the country in which they were born,” IOM’s Global Migration Report 2020 said.
India continues to be the largest country of origin of international migrants, with 17.5 million living abroad, followed by Mexico (11.8 million) and China (10.7 million)


According to the UN agency, more than half of all international migrants (141 million) live in Europe and North America.


An estimated 52 per cent are male, and nearly two-thirds of all migrants are looking for work; that’s around 164 million people.

Most hail from India, Mexico and China
India continues to be the largest country of origin of international migrants, with 17.5 million living abroad, followed by Mexico (11.8 million) and China (10.7 million).
Other findings indicate that the number of migrant workers declined slightly in high income countries – from 112.3 million to 111.2 million – but increased elsewhere.
Upper middle-income countries saw the biggest increase, from 17.5 million to 30.5 million.

African migrants tend not to leave continent
Although most migrants travelled to the US, the report confirmed other important migration corridors from poorer countries to richer nations such as those to France, Russia, the United Arab Emirates and Saudi Arabia.
“This pattern is likely to remain the same for many years into the future, especially as populations in some developing subregions and countries are projected to increase in coming decades, placing migration pressure on future generations”, IOM said.
In Africa, Asia and Europe, most international migrants stay within their regions of birth, but the majority of migrants from Latin America and the Caribbean and North America do not.
In Oceania, finally, migration levels remained about the same in 2019.
Focusing on the Middle East, data showed that Gulf countries have some of the largest numbers of temporary labour migrants in the world, including the United Arab Emirates, where they make up almost 90 per cent of the population.

Conflict linked to record displacement
Highlighting how ongoing conflicts and violence in Central African Republic, the Democratic Republic of the Congo (DRC), Myanmar, South Sudan, Syria and Yemen have led to massive internal displacement in the last two years, IOM’s Internal Displacement Monitoring Centre said that a total of 41.3 million people were forced to flee their homes at the end of 2018 – a record since monitoring began in 1998.
Syria has the highest internally population of displaced people, at 6.1 million, followed by Colombia (5.8 million) and the DRC (3.1 million).
After nearly nine years of conflict, Syria is also the top refugee-originating country, at well over six million – dwarfing Afghanistan (at around 2.5 million) – out of a total of nearly 26 million.
Finally, turning to the impact of climate and weather disasters, the report notes that Typhoon Mangkhut in the Philippines contributed to the fact that 3.8 million people were newly displaced there at the end of 2018, the largest number globally.
This story was originally published by UN News