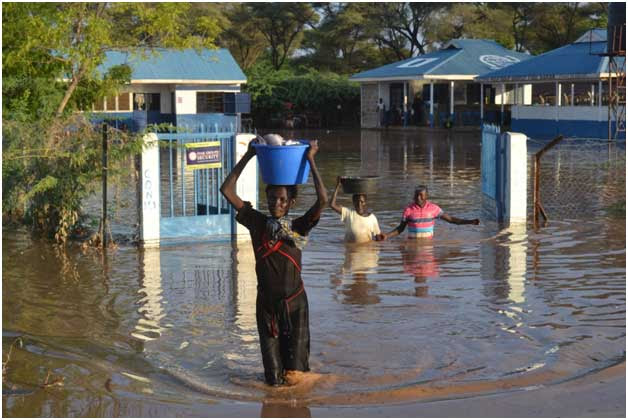 Floods in Kenya's Turkana County, Lodwar town. Credit: Isaiah Esipisu/IPS
ADDIS ABABA, Ethiopia, Aug 28 2019 (IPS) - African leaders have been asked to walk the talk, and lead from the front, in order to build resilience and adaptation to the adverse impacts of climate change on the continent.
This was the message conveyed by several speakers at the ongoing eighth Climate Change and Development in Africa (CCDA) conference in Addis Ababa, Ethiopia.
“Our first urgent action is to build the Resilience and Adaptation to the adverse impacts of climate change for the most vulnerable communities across Africa,” said Dr James Kinyangi, the Chief Climate Policy Officer at the African Development Bank (AfDB), as he articulated commitments by the Bank on tackling climate change.
“The time is now, to translate the (2015 Paris) agreement into concrete action, to safeguard development gains and address the needs of the poorest and most vulnerable,” he told the CCDA forum which brings together policy makers, civil society, youth, private sector, academia and development partners every year to discuss climate emerging issues and to review progress ahead of the UNFCCC Conference of Parties (COP).
“We must challenge our leaders to walk the talk, and lead from the front in the spirit of the UN Secretary General, who recently pointed out that beautiful speeches are not enough to reach the goals of the Paris Agreement,” said Mithika Mwenda, the Secretary General for the Pan Africa Climate Justice Alliance (PACJA) an umbrella organization of over 1000 Africa environment and climate civil society groups.
So far, 53 African countries have committed to Nationally Determined Contributions (NDCs) to slow down the impact of climate change, identifying the need for an estimated USD 3.5 – 4 trillion of investment by 2030.
According to Kinyangi, these commitments present an opportunity for the AfDB to contribute to policies and actions that mobilise the financial resources needed to support long-term investments in resilience and Africa’s transition to low carbon development.
In a recently published interview, AfDB President Akinwumi Adesina said: “Africa cannot adapt to climate change through words. It can only adapt to climate change through resources.”
“Africa has been shortchanged in terms of climate change because the continent accounts for only 4 percent of greenhouse gas emissions but it suffers disproportionately from the negative impacts,” he declared.
He said AfDB is leading an effort to create an African Financial Alliance for climate, which will bring together financial institutions, stock exchanges, and central banks in Africa, to develop an endogenous financing model that would support Africa to adapt to climate change without depending on anybody else outside the continent.
Early this year, tropical cyclones, Idai and Kenneth ripped through five African countries – Mozambique, Malawi, Tanzania, Zimbabwe and the Comoros both within a period of one month.
Kenneth is on record as the strongest storm ever to make landfall, while Idai, is the worst ever storm in terms of loss and damages to hit the African continent, where more than 1,000 lives were lost with damage of property worth 1 billion US dollars.
“In Sudan, we have just won a democratic struggle, but we are faced by another catastrophic ecological crisis of monumental proportion, which, last week alone, killed at least 62 people and destroyed 37,000 homes,” said Nisreen Eslaim, a climate activist from Sudan, referring to floods that recently swept through the city of Khartoum.
Since the threat of floods, droughts and heatwaves will be amplified with increasing climate variability, experts believe that the best response strategy is one that improves the resilience of economies, infrastructure, ecosystems and societies to climate variability and change.
“As much as we are trying to respond to climate related calamities, we need longer-term action for disaster risk management. Hence, a reason why we must do whatever it takes to implement the Paris Agreement,” Kinyangi told IPS.
To support African countries adapt to climate change, AfDB has committed to ensuring that at least 40 percent of its project approvals are tagged as climate finance by 2020, with equal proportions for adaptation and mitigation. The bank also seeks to mainstream climate change and green growth initiatives into all investments by next year.
“As much as we will be mobilizing significantly, more new and additional climate finance, to Africa by 2020, we will keep pushing the rich countries to deliver on the pledged 100 billion dollars each year,” said Kinyangi.
“As we know, our leaders’ focus is slowly but surely turning to other issues dominating international diplomatic interactions such as Iran/US tiff, Brexit, Terrorism and the emerging extreme right-wing movements, which constitute a risk of increased climate scepticism,” said Mwenda.
“Our only hope is unity of purpose, and the purpose which brings us here in Addis Ababa – to contribute to a process which will shape the future of humanity and health of the planet,” added the PACJA boss.
According to Ambassador Josefa Sacko, the Commissioner for Rural Economy and Agriculture at the Africa Union Commission, there is need for increased ambition in the fight against climate change.
“Without ambitious and urgent global commitments to tackle climate change, the ability of most African countries to attain the Sustainable Development Goals and the ideals of Africa’s Agenda 2063 remain elusive,” she said.
Meanwhile, UN Secretary-General António Guterres, has convened a Climate Action Summit September 23 at the United Nations in New York, and has called on all leaders to come to the summit with concrete, ambitious and realistic plans to enhance their nationally determined contributions by 2020, in line with reducing greenhouse gas emissions by 45 per cent over the next decade, and to net zero emissions by 2050 as called for by the IPCC special report.