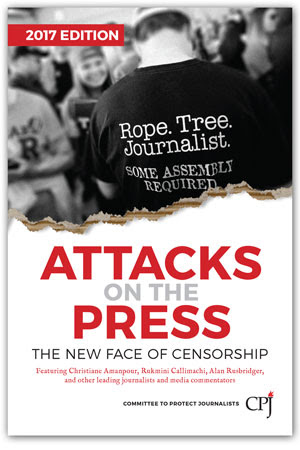 NEW YORK, Jan 26 2018 (IPS) - On January 10, radio journalists Darsema Sori and Khalid Mohammed were released from prison after serving lengthy sentences related to their work at the Ethiopian faith-based station Radio Bilal. Despite their release and Prime Minister Hailemariam Desalegn’s promise earlier this month to free political prisoners, Ethiopia’s use of imprisonment, harassment, and surveillance means that the country continues to be a hostile environment for journalists.
Darsema, who featured in CPJ’s Free the Press campaign, and Khalid were released after a supreme court ruling late last year reduced their sentences. Mustefa Shifa Suleyman, who acted as one of their lawyers, told CPJ that the journalists should have been released on the day of the court ruling, and that the delay was “not appropriate.”
Like all of the journalists jailed in Ethiopia at the time of CPJ’s 2017 prison census, Darsema and Khlaid were held on anti-state charges. At least three other journalists remain in prison: Zelalem Workagegnehu is serving a five-year, four-month sentence, and Woubshet Taye and Eskinder Nega are serving 14 and 18 years respectively for their journalism, according to CPJ research.
Even those journalists freed pending the outcome of a trial face frustrations from arbitrary court delays. Befekadu Hailu, a member of the Zone 9 blogging collective who was previously jailed for his journalism with eight of his colleagues in 2014, told CPJ that is still awaiting a final verdict related to that case.
Since the prime minister announced that political prisoners would be released, authorities have freed at least 115 people, according to a Reuters report. Yared Hailemariam, executive director of the Swiss-based Association for Human Rights in Ethiopia, told CPJ the government had yet to provide any indication on “whether journalists are included” among those who will be freed.
Befekadu told CPJ that releasing political prisoners is only part of the wide-ranging reforms needed to make Ethiopia a friendlier environment for dissenting voices, a sentiment echoed by Human Rights Watch. Befekadu and Yared both told CPJ they believe that the government should urgently review the anti-terror proclamation of 2009, which has been used to silence dissenting voices and to persecute critical journalists. On January 19, the United Nations human rights spokesperson, Liz Throssell also called on Ethiopia to amend anti-terror legislation in line with international standards, and to revise laws that restrict the media, Reuters reported.
As well as legal action, the government has a series of other tools to intimidate and harass critical reporters. A December 2017 report by the University of Toronto’s Citizen Lab, found that since 2016, “a campaign of targeted malware attacks apparently carried out by Ethiopia” was directed at activists and Oromia Media Network (OMN), a U.S.-based media outlet that reports on Ethiopia. Jawar Mohammed, the network’s executive director, said that the attacks began four days before a state of emergency was declared.
“Our contacts were not compromised … we were able to beef up our security,” Jawar told CPJ. “If this is what [Ethiopian authorities] are doing to us here abroad, imagine what they’re doing to journalists in Ethiopia where they control the telecommunications.”
During the state of emergency, in place between October 2016 and August 2017, the government tightened its control over access to information, banning diaspora television and victimizing those associated with these outlets, according to Human Rights Watch.
During this period CPJ found that journalists were slapped with terror charges or harassed while trying to cover unrest, and the government periodically blocked the internet. One privately owned publication, the Addis Standard, stopped printing on account of what it described to Reuters as “impossible” conditions.
Authorities have used internet shutdowns during other politically sensitive periods too, CPJ has found. During protests in 2016, authorities cut access to social media access at least four times in the country’s Oromia region, according to research by digital rights group, Access Now.
These shutdowns continued even after the state of emergency was lifted, with media reports indicating that the government blocked access to social media sites again following protests in mid-December. Mobile data was still inaccessible outside Addis Ababa this month, according to Yared and Atnafu Berhane, another Addis-based Zone 9 blogger.
As well as restricting Ethiopians’ access to information, the shutdowns have hampered journalists’ ability to communicate safely with each other and their sources. Befekadu and another journalist, Belay Manaye, said that because of this, the flow of news from regions outside Addis Ababa is, in effect, blocked.
Other journalists have been targeted directly over their critical commentary on social media.
Zone 9 blogger Mahlet Fantahun told CPJ that while she was covering a trial in November, a judge called her to the defendant’s stand to ask her about her Facebook posts, and warned her against writing critical comments on the social media site.
Mahlet said that in one of the posts the judge referred to, she had shared her opinion of a trial in which the defendants complained about the judge. In the second post, she had shared a Facebook user’s plea for a verdict in another trial. Mahlet said that she has since deactivated her Facebook account.