The ruling leaves Assange, 46, in a legal and diplomatic impasse, with no way out of the embassy where he has lived for almost six years, unless he decides to face the prospect of arrest by British police. 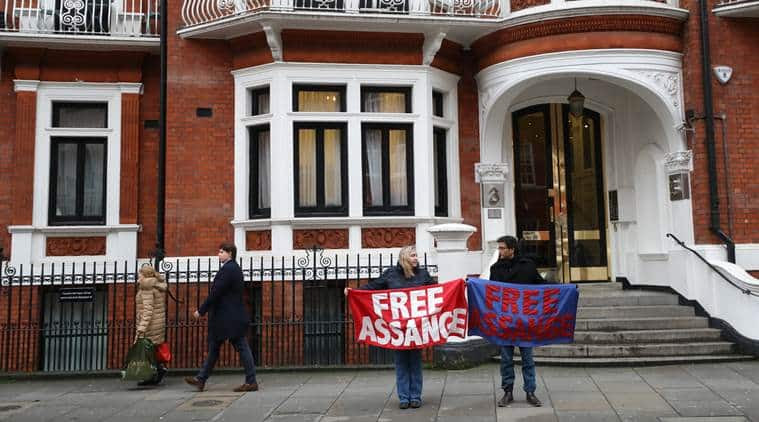 Assange supporters hold a banner outside the Ecuadorian Embassy in London, Britain, February 13, 2018. REUTERS/Peter Nicholls
A British judge refused on Tuesday to halt legal proceedings against WikiLeaks founder Julian Assange for jumping bail and fleeing to the Ecuadorean embassy in London in June 2012. The ruling leaves Assange, 46, in a legal and diplomatic impasse, with no way out of the embassy where he has lived for almost six years, unless he decides to face the prospect of arrest by British police.
Assange said on Twitter he had three months to appeal the ruling, without specifying whether he would. He said the judge’s ruling contained “significant factual errors” which he did not spell out.
Australian-born Assange entered the embassy to avoid being sent to Sweden to face allegations of sex crimes, which he denied. The Swedish case was dropped in May last year, but Britain still has a warrant out for his arrest over his breach of bail terms.
His lawyers had argued that British authorities should give up on arresting him, on public interest grounds, but Senior District Judge Emma Arbuthnot rejected all their points and criticised Assange.
“The impression I have … is that he is a man who wants to impose his terms on the course of justice,” she said in her ruling at Westminster Magistrates Court.
“He appears to consider himself above the normal rules of law and wants justice only if it goes in his favour.”
Assange has said all along that the Swedish sex allegations were baseless and the real reason for his legal troubles was the fact that he had published U.S. diplomatic and military secrets on WikiLeaks. He fears that handing himself in would lead to extradition to the United States.
Assange’s supporters regard him as a champion of free speech who has exposed government abuses of power at great personal cost. His critics seem him as a criminal who recklessly endangered lives in many countries by exposing secrets. Police motorcyclists briefly stop outside the Ecuadorian embassy in London, Tuesday, Feb. 13, 2018. A British judge is set to decide Tuesday whether to quash or uphold an arrest warrant for WikiLeaks founder Julian. (AP Photo/Alastair Grant)
US INVESTIGATION
There is no public record or evidence demonstrating any U.S. criminal charges are pending against Assange, but he and his supporters believe U.S. prosecutors could have a sealed, therefore secret, indictment against him.
A U.S. government official told Reuters on Monday that federal prosecutors were still pursuing a criminal investigation against WikiLeaks using a grand jury based in Alexandria, Virginia, a suburb of Washington D.C..
But Judge Arbuthnot said that should the United States seek Assange’s extradition, he would be able to challenge that in the courts by raising issues such as whether he could get a fair trial and whether U.S. prison conditions were acceptable.
“The courts would consider, with the assistance of Mr Assange’s lawyers and expert witnesses, whether he should be extradited,” she said.
The judge also said she had to take into account the impact on public confidence in the British criminal justice system should Assange be allowed to avoid a warrant for his arrest by staying out of reach of the police for years.
Assange’s lawyers had argued that his restricted living conditions in the Ecuadorean embassy, in a first-floor apartment in the affluent Knightsbridge district of London, amounted to severe and disproportionate punishment for breaching bail terms.
They said he had no sunlight and was suffering from depression, respiratory infections, dental problems and a frozen shoulder for which he could not get treatment.
The judge rejected those arguments, saying conditions in the embassy were much better than in prison.
“Firstly, he can leave the embassy whenever he wishes,” she said.
“Importantly for a man who spends a great deal of time on his computer, he is free to use multi-media, whether his computer or a mobile phone, in a way that prisoners are not allowed to do.”
She also disputed that he had no sunlight, noting that she had seen multiple photographs of Assange on the embassy balcony.
Assange responded on Twitter: “Pulling security to get me safely on the balcony six times in six years for a few minutes turns into this.”
For all the latest World News, download Indian Express App
Publicado por salud equitativa en 4:30