Trump’s 1st State of the Union: Refugee Policy & What Will Likely Go Unsaid 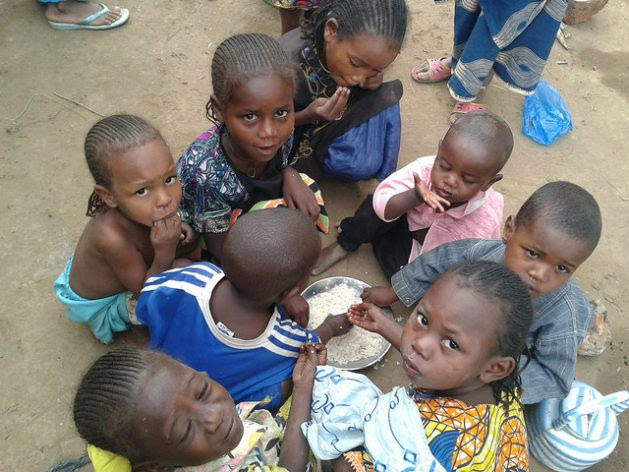 Child refugees from Central African Republic in Cameroon’s eastern border town of Garoua-Boula share a plate of rice. Credit: IPS
WASHINGTON DC, Jan 29 2018 (IPS) - It is unlikely that President Trump will reverse his policies toward refugees in his State of the Union address on 30 January. Despite his expected silence on the state of U.S. and global refugee policy, there is a lot to say about how refugee policy has changed and will change in the future.
It’s been a rough year for refugees and those who work with them. Globally, refugee protection is under threat. European countries are implementing policies to prevent would-be refugees from even reaching their territories to ask for protection.
Australia continues its draconian policy of turning back boats of asylum-seekers and paying other countries to detain them. Countries neighboring Syria have effectively closed their borders to desperate civilians fleeing bombs and attacks, leaving large numbers of internally displaced persons huddled near the borders.
Israel is planning to deport 40,000 African asylum-seekers. Myanmar and Bangladesh seem to be negotiating an agreement for the return of Rohingya refugees with scant regard for their rights back in Rakhine state. The news reports can go on and on.
And, of course, little progress has been made in bringing an end to the conflicts that have displaced over 40 million people within their countries and another 25 million as refugees who have crossed international borders.
And then there’s the United States, which has not only cut the number of refugee resettlement places by more than half—to an all-time low ceiling of 45,000—but has introduced additional administrative procedures that make it unlikely that even 50 percent of that already-low ceiling will be met.
Throughout the country, affiliate agencies that have supported the resettlement and integration of refugees through strong community ties are laying off staff and, in some cases, closing up shop. Our country’s capacity to resettle refugees is being dismantled—and if and when resettlement starts up again, it will take time to rebuild that capacity.
Refugee resettlement has always met the needs of only a small number of refugees—less than 1 percent of the world’s refugee population. With the decline in U.S. resettlement numbers, that percentage will fall even lower.
That’s a tragedy for the refugees who were expecting to be resettled, especially for those for whom resettlement was the only option for survival, like refugee children needing life-saving medical treatment not available to them where they are living.
But it also has repercussions for the whole international refugee system which is built on the idea of international cooperation. When the U.S.—a country with an unsurpassed record of resettling refugees—turns its back on refugees, it sends a strong message to other countries that it’s OK to close borders.
Over the course of the next 6–9 months, a new Global Compact on Refugees will be developed and presumably adopted by the United Nations. While the Trump administration has pulled out of the Global Compact on Migration, the process for developing the Refugee Compact is different as it is the UN High Commissioner for Refugees which is charged with developing the draft compact.
In spite of restrictionist policies and toxic xenophobic discourse evident just about everywhere, there is some hope that the new Global Compact on Refugees will move the international community toward more effective and coordinated response to large-scale movements of refugees.
As an American, it’s been a sad to see the U.S. play a fairly passive role in the discussions so far as we have such a long tradition of playing a leadership role in humanitarian forums—no matter which party has occupied the White House.
I wish that President Trump would use his mantra of “Make America Great Again” to reaffirm what has indeed made us great: our policies of welcoming refugees and immigrants by offering to the world a model of the American dream—no matter where you come from or how poor your parents are, America offers an opportunity for a better life.
A life where if you work hard, you can get ahead in a country where your talents can be recognized and rewarded no matter the color of your skin or your religion or what happened to you in the past. Many other countries have strong democratic traditions and robust economies but only a few countries have similar experiences of having been formed by immigrants and refugees.
And no other country has welcomed refugees and immigrants on the scale of the United States. It is who we are. I hope in his address, President Trump will at least leave the door open so that we can reclaim that tradition and return to welcoming refugees in the way that will make America great again.
*Editor’s Note: This post is part of series by Brookings experts on Trump’s 1st State of the Union.