Stooping to cover | The Indian Express

Stooping to cover | The Indian Express

Watchdog journalism is being replaced by guard dog journalism. Media is deferential to authority, intolerant of contrarian views. 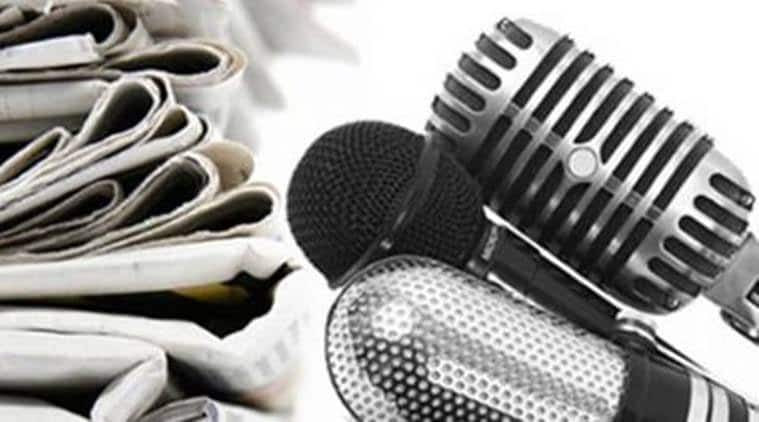 I admit things are worse on television but I’m not the only one to sense that print is also pulling its punches and reining itself in.
These are not good times for the Indian media. Most people I know have formed an irrevocable impression that it’s become pusillanimous. Where once newspapers and television channels boasted of challenging and exposing the government, we now flinch from doing so. Worse, when our voices are raised it’s against the government’s opponents and critics — particularly those who have the gall to question the Prime Minister or the Army Chief — Muslims and Kashmiris, students and Dalits, liberal academics and avant-garde authors.
I admit things are worse on television but I’m not the only one to sense that print is also pulling its punches and reining itself in. Instead of watchdogs that should growl at the authorities, even if occasionally mistakenly so, the media behaves like guard dogs, who seek to protect, or pet dogs, who just wish to be liked.
As someone who has spent over 35 years in television, I’m particularly perturbed by four trends I’ve repeatedly noticed in the last few years. Now that I’ve taken a break from television I feel a moral compunction to speak out. Not to do so would let down the profession I love.
First, there’s the way anchors choose to interview the Prime Minister. It’s done with obvious deference which leaves little opportunity to challenge or even cross question. Instead of focussing on a few well-researched subjects which are then pursued with diligence, each question changes the issue. There’s no follow-up. Consequently, a multitude of subjects is raised without any meaningful achievement. Equally importantly, the Prime Minister is permitted to answer at exorbitant length, often rambling and frequently changing the subject and getting away with it. Even Donald Trump has never been interviewed this way!
Worse still, is the character of the questions. Not only are awkward issues avoided but the questions are emoliently phrased and gently asked. Instead of bringing up his lapses or misjudgements, the Prime Minister is asked to hold forth on the Opposition’s alleged errors. At no point is he questioned about things that have gone wrong under his charge. The net result is the interview lacks rigour. It feels like an easy ride. It’s the same whether you watch it on CNN News18, Times Now or Zee.
A second concern is the way some anchors behave during television discussions. Those guests who represent viewpoints they agree with are treated gently, permitted to speak frequently and at whatever length they want. But woe betide the guest whose views are contrary to the anchor’s. He or she is treated like a guilty prisoner in the dock. Voices rise, language loses its restraint and questions are fired relentlessly. The tone is accusatory and a deliberate attempt is made to shame the person. He or she is frequently interrupted. Indeed, they’re given little chance to answer one question before the next is hurled at them.
Yet the object of a discussion is to give the audience a chance to hear different viewpoints articulated by different voices. The aim is to explore, artfully and forensically, and leave the audience both enriched and able to judge for itself. Where fair and even-handed treatment is required, the anchor, instead, takes sides and each time he does exposes his prejudices. This can only diminish him.
You see this most often on Republic TV and Times Now but there are younger anchors on other channels who have also fallen prey to this practice, presumably because they think it wins audiences and, perhaps, easy popularity.
My third concern is best reflected by NDTV because it seems to be the only English news channel with a credible prime-time evening news broadcast. After every story, the news-reader feels an urge to tell the viewer what to think or how to judge its content. The remarks may be pithy but they still editorialise. The newspaper equivalent would be a comment by the editor at the end of every front page story telling the reader what to make of it. This breaches the sanctity of news. The viewer should be told what’s happened, not how to judge or what to make of it. The latter is an intrusion of the news-reader’s personal viewpoint which is always unnecessary and, frequently, unwelcome. Worse, this ends up treating viewers like children. It’s, therefore, also demeaning. NDTV is a channel I respect and have the least complaints about but this rankles every evening. I’m surprised the channel’s editors have allowed it to continue.
The grotesquely nationalist hashtags TV channels concoct to push a story or gather a response is my fourth concern. They reek of ersatz patriotism. They’re like drum beats designed to marshal or dragoon a desired response. They deny you an opportunity to think for yourself. Instead, they seek to corral your thoughts. Worse, they’re so artless and crude and they’re an affront to intelligence. “#FightForIndia,” “#LoveMyFlag,” “#ProudIndian,” “#TerrorStatePak” and “#AntiNationJNU” are attempts to play with our emotions and infantilise us.
Finally, the argument that what I’ve criticised is, in fact, an illustration of new age journalism carries no conviction. I may be old-fashioned but even if how a story is presented alters with time and technology, its quest for the truth has to be unchanging. No matter how it’s delivered, good journalism stands out. Bad journalism, on the other hand, cannot be disguised, leave aside forgiven, by self-serving excuses about the mood of the people or the atmosphere of our time. And certainly, no attempt to make journalism popular justifies lowering standards of objectivity and fair play.
Ultimately, this is more than just about our news channels. Indeed, it goes even further than our democracy. It’s about us and how we receive the unvarnished truth. If we tolerate half-truths and misrepresentation, we have only ourselves to blame.
The writer is president of Infotainment Television.
For all the latest Opinion News, download Indian Express App
More From Karan Thapar