Spanish Way of Life: The Galician outreach scheme trying to combat the scourge of loneliness | In English | EL PAÍS

Spanish Way of Life: The Galician outreach scheme trying to combat the scourge of loneliness | In English | EL PAÍS

The Galician outreach scheme trying to combat the scourge of loneliness

The Aberta Family project, created by a Franciscan religious order, is addressing the epidemic of solitude the region is suffering 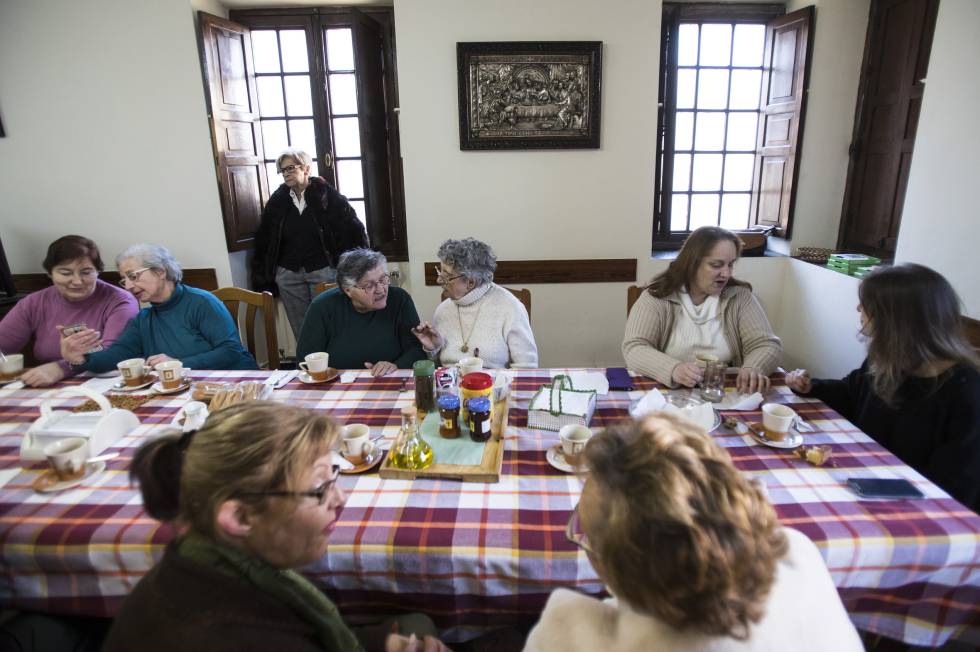 Participants in the initiative have breakfast together in the Betanzos convent building. ÓSCAR CORRAL


Rosa became a widow last August, and ever since then, an all-pervading silence has weighed heavily on her shoulders. Only a single daily phone call from a friend, at 9pm, helps to assuage her sense of loss. One of the last inhabitants of an ever-shrinking village in the Betanzos municipality (La Coruña), she rarely comes into contact with anyone else apart from when she gets this call. “We chat for about half an hour. We never gossip, but I try to say things that make her laugh,” says Pilar, Rosa’s phone buddy, and one of the volunteers with the Aberta Family project, created by the Franciscan religious order in Galicia to try to combat the epidemic of loneliness that the region is suffering.
The problem is not just limited to Spain. The UK government recently appointed a minister for loneliness
The problem is not just limited to Spain. The UK government, for example, recently appointed a minister for loneliness. In the case of Betanzos, the San Francisco convent has been brought back to life after laying empty for several years, after the last nuns resident there left for good. The idea is to create a family of people “who are, or who feel, lonely.” The participants spend the day in its facilities, eating meals together, doing their washing together, sharing costs, and benefiting each other with the gift of company.
“It’s not a daycare center or an act of charity, it’s not even a social center,” explains Friar Enrique Roberto Lista. “It’s more like a self-managed place that isn’t funded by outside grants, and in which we want to imitate the atmosphere of a normal family, where people have the freedom to come and go without obligation, and where there are no religious requirements.”
The project is open to anyone in neighboring municipalities, and its organizers hope it will be rolled out to other empty religious buildings, such as rectory houses in different parishes.
Adela, who is aged 80, was “cooped up” in her house for some time, “crying alone,” but now she has become part of the Aberta Family. “I’ve lived without my mother for 15 years and without my father for 38,” she explains. “I love being part of this initiative, because it keeps us working and keeps us busy, and I’m with people who are going through the same things as I am.”

I love being part of this initiative, because it keeps us working and keeps us busy, and I’m with people who are going through the same things as I am

ADELA, 80
There are approximately 4.5 million people living alone in Spain, according to numbers from the organizers of the Familia Aberta project, and it’s a statistic that increases every year. According to a book published in 2015 called La soledad en España (or, Loneliness in Spain), by Juan Díez and María Moreno, more than 70% of people who live alone suffer from loneliness, while more than half of those who share their homes also suffer.
The initiative has taken off in Betanzos with nine women and, according to social worker Antía Leira, has already faced difficulties in eradicating “the stigma regarding loneliness, and the shame.” “Those who suffer from this often have a difficult time identifying the root of their problems, because they often are the people who are living with others in their homes,” notes Leira. “It is a hidden need: everyone knows there is a problem, and the news stories about old folks dying without anyone noticing are more and more common, but taking a step toward combating the epidemic is difficult.”
Over the last six months, volunteers working on the project have launched a door-to-door outreach campaign, visiting places in Betanzos that are frequently visited by people living alone, and contacting social services in the area. Friar Lista has spent years working with facilities for the homeless and rehabilitation centers – in fact, the idea for the Aberta Family came to him while he was working at a drug-rehabilitation center in Italy, trying to help drug addicts break their dependency by creating “families” that could help alleviate their struggles.
More than 70% of people who live alone suffer from loneliness, while more than half of those who share their homes also suffer
“Put two lonely people together and they are no longer lonely, the solution to this epidemic is found in the afflicted themselves,” says the friar, while members of the Aberta Family pass around trays of cake and cookies, sat in the dining room of the 14th-century convent. The friend of Pilar, the one who feels so alone, has yet to integrate herself within this makeshift family. “She isn’t very trusting and rather withdrawn,” Pilar explains. “It’s hard for her, but I tell her that this would do her a world of good.”
Among those suffering from loneliness, the volunteers from the project are particularly worried about recently divorced men, who are the least likely to ask for help. Ramón, who is 67 years old, saw his third marriage break up five years ago, and since then has been looking for daily ways to keep himself occupied. “We, as humans, are made for living in communities and need people to care about,” he says. “At the same time, we are reluctant to share information like this because we feel like we shouldn’t have to share our life stories with others.”
Sadness as a result of social isolation is not just limited to effects of old age. “There are very young people who also feel very alone,” claims Adriana García, who also works on the initiative. “This society pushes you toward loneliness. We have fewer children, families are more spread out, and technology connects you in some ways, but closes you off in others. And there are work timetables that don’t leave time for friendships or the family. Adjusting work schedules would be a great move toward combating loneliness.”
English version by Laura Rodríguez.
Publicado por salud equitativa en 6:16