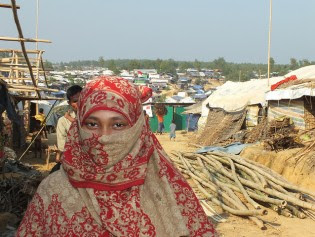 By Matthew Wells
Abdu Salam stayed in his village as Myanmar soldiers and local vigilantes burned down dozens of homes there last August. He stayed as news spread of atrocities that soldiers had committed in other Rohingya villages across northern Rakhine State. He stayed because Hpon Nyo Leik village was his home, the only home he’d known, and he wanted to protect his family’s property and right to live there.

Pyeongchang Olympics: A New Cornerstone for Peace and Prosperity

By Shamshad Akhtar
All eyes are on the 23rd Olympic Winter Games and 12th Paralympic Winter Games in PyeongChang this February. Top athletes will carry their national flags in an opening ceremony which has come to epitomize the international community. Sports fans worldwide eagerly await the Olympics, and this time there is cause for cautious optimism that sport diplomacy may lower tensions on the Korean Peninsula itself. Leaders, diplomats and citizens from the world over will witness North and South Korean athletes walking side by side. For this, there could be few better places than PyeongChang, which means peace (Pyeong) and prosperity (Chang): goals integral to the mission of the United Nations and the 2030 Sustainable Development Agenda.

By International Organization for Migration
IOM, the UN Migration Agency, has facilitated the release of over 500 refugees from immigration detention centres in North Sumatra, Riau, and Riau Island provinces to community housing.

By Naimul Haq
Although Bangladesh has made remarkable recent strides like building green factories and meeting stringent safety standards, garment workers here are still paid one of the lowest minimum wages in the world.

How It Feels to Survive Slavery: Ira’s story

By Olga Borzenkova
“A client called at night and ordered a girl. I was sleeping when suddenly I was told to go to the client. He was already drunk and aggressive. I was scared to stay with him. He made me drink and I had to obey. You feel neither pain nor shame when you are drunk. Everything goes easier. I woke up in the morning and got ready to leave when he told me to stay. He told that he had paid for the whole day and I must work it off. The door was closed. He hid the door keys and my phone. He claimed that he had paid for my services and could do with me whatever he wanted… He fell asleep soon again. I didn’t find the keys. I thought I could exit through the window. It was the third floor and there was a fire escape ladder nearby. I decided to climb over the balcony to the ladder. And fell down… Everything happened very quickly. I felt no pain… I remember that I tried to stand up but couldn’t and saw my bones sticking out of my arms. I passed out. I came round in the ambulance. Later – only in the intensive care unit. There I told my name and where I came from. Doctors called my relatives. Later my family moved me back to Belarus. It was super expensive.”

By Will Higginbotham and Tharanga Yakupitiyage
More than 200 million women around the world have experienced some kind of female genital mutilation (FGM) and more could be at risk, a UN agency said.

By Tharanga Yakupitiyage
UN agencies have sounded the alarm on the rapidly deteriorating humanitarian situation in Gaza, pointing to the devastating repercussions of the ongoing fuel shortages.

Three Opportunities for Humanitarians in 2018

By Larissa Fast
As 2018 begins, the challenges of humanitarian crises are momentous. Humanitarians are responding to large-scale emergencies in the Democratic Republic of Congo (DRC), Iraq, Syria and Yemen.

One Migrant’s Brutal Odyssey Through Libya

By Kwaku Botwe
Thirty-year-old Nazir Mohammed sits on one of the two sofas in his single room in Kwame Danso, a small town about 290 kilometres north of Ghana’s capital Accra, reflecting on life back in Libya.

By International Organization for Migration
At the end of 2015, the Government of Canada requested the International Organization for Migration (IOM) to support the Prime Minister’s commitment to admit 25,000 Syrian refugees from the Middle East. IOM quickly deployed logistics and operational staff from around the globe to complete the humanitarian operation which spanned three months from December 2015 through February 2016.

By Jonathan Rozen
A ceasefire agreement signed on December 21 between the South Sudanese government and opposition forces has revived a 2015 peace process and brought hope that the conflict will not persist into its fifth year.

Survival of Indigenous Tribes in Bangladesh Starts at School

By Rafiqul Islam Sarker
Just before sundown on Jan. 30, a group of women day labourers from the Shantal indigenous community are in a rush to wind up their work harvesting potatoes in a field in the village of Boldipukur, some 15 km away from Rangpur district in northern Bangladesh.

By Jim Lobe
Except for the ongoing war in Syria, coverage of the Middle East by the evening news programs of the three big U.S. networks virtually disappeared in 2017, according to the latest annual compilation by the authoritative Tyndall Report.

By International Organization for Migration
An estimated 90-100 migrants are reported to have been on board a boat, when it capsized off the coast of Libya on Thursday evening (01/02). According to IOM Libya’s Olivia Headon, 10 bodies are reported to have washed up on Libyan shores – one Libyan woman and reportedly some Pakistani nationals. Two survivors are reported to have swam to shore, while another was rescued by a fishing boat, Headon said. IOM is working to get more details of the tragedy and to see how best to assist survivors, she continued.

By Bjørnar Moxnes
As a member of the Norwegian parliament, I proudly use my authority as an elected official to nominate the Boycott, Divestment and Sanctions (BDS) movement for Palestinian rights for the Nobel Peace Prize.

By Faryal Sajjad
An estimated 44 tonnes of processed heroin is consumed in Pakistan annually, generating some $2 billion in illegal trade, according to a report in the Telegraph in 2014. The figure, it is feared, has gone up since then. According to the Anti-Narcotics Force, close to 8.9 million people in Pakistan are drug dependent and local media sources suggest drug-related complications claim 700 lives daily in the country — much higher than terrorism. This figure is all the more alarming as the average age for drug use has fallen below 24, signalling a worrisome nature of the problem amongst the youth.

By Will Higginbotham
In Iraq, thirty years of armed conflict has killed hundreds of thousands of people, wounded countless more, displaced millions and laid cities and towns to waste.

By Joseph Chamie
Most of the world’s women have experienced sexual harassment. Based on available country surveys, it is estimated that no less than 75 percent of the world’s 2.7 billion women aged 18 years and older, or at least 2 billion women, have been sexually harassed (Figure 1).