In the aftermath of other shootings, many survivors try to heal in private and return as best they can to daily life. If there is an outcry for new gun legislation or better background checks, it often fades in days or weeks. 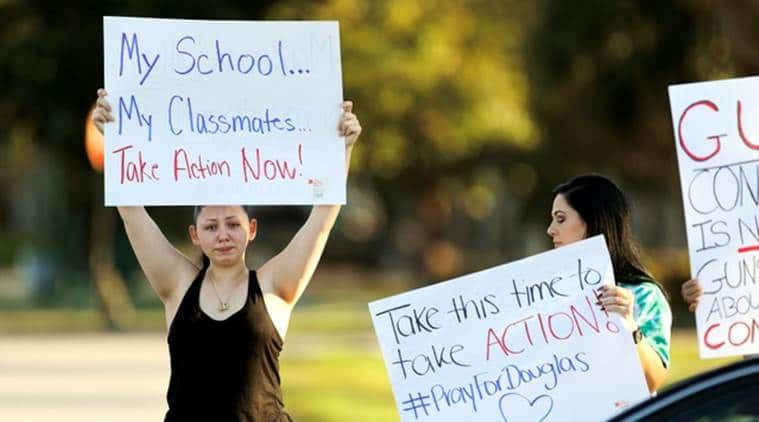 Angelina Lazo (L), an 18-year-old senior at Marjory Stoneman Douglas High School, who said that she lost two friends in the shooting at her school two days ago, joins other gun control proponents with placards at a street corner in Coral Springs, Florida. REUTERS/Jonathan Drake
Dead bodies were still inside Marjory Stoneman Douglas High School when survivors of this week’s shooting began speaking out about gun violence. It seemed as if the teens had stepped straight from the bullet-scarred school into the nation’s gun debate.
Rather than retreating back into their private lives, the young people who saw classmates slain at the desks next to them are fast becoming advocates for stronger weapons laws and a safer world.
David Hogg, a senior and news director at the high school, recorded video of Wednesday’s massacre as he huddled in a room with fellow students.
“Imagine hearing bullets … it’s absolutely awful,” Hogg said. “This is why people need to be politically active. This needs to be a turning point.”
In the aftermath of other shootings, many survivors try to heal in private and return as best they can to daily life. If there is an outcry for new gun legislation or better background checks, it often fades in days or weeks.
Will this time be any different than the short-lived movements that followed shootings at the Pulse nightclub in Orlando or a country music concert in Las Vegas? The students say yes. They say they are tired of seeing blood and corpses on classroom floors, and they want their generation to be the catalyst for change. U.S. President Donald Trump and first lady Melania Trump visit with Dr. Igor Nicheperenko, trauma surgeon at Broward Health North Hospital in the wake of the shooting at Marjory Stoneman Douglas High School in Pompano Beach, Florida, U.S., February 16, 2018. REUTERS/Eric Thayer
So far, the teens have sparred with gun-rights activists on social media, given many television interviews and spoken at vigils that doubled as rallies for safer gun laws. A social media campaign under the hashtag (hash)neveragain also took off on Twitter, and another student did an “ask me anything” chat on Reddit.
“I was hiding in a closet for two hours. It was about guns. You weren’t there, you don’t know how it felt,” student Carly Novell tweeted in response to a gun-rights backer who criticized the response to the shooting. “Guns give these disgusting people the ability to kill other human beings. THIS IS about guns and this is about all the people who had their life abruptly ended because of guns.” A sign is seen next to candles and tributes at a park where crosses were placed to commemorate the victims of the shooting at Marjory Stoneman Douglas High School, in Parkland, Florida, U.S., February 16, 2018. REUTERS/Carlos Garcia Rawlins
At a vigil for the victims, a crowd of more than 1,000 people, consisting largely of students, chanted, “No more guns! No more guns!”
Some teens have been critical of President Donald Trump for failing to mention guns in his comments about the attack at their school, and many more have pointed out the thousands in campaign contributions Trump and Florida Republican Sen. Marco Rubio have taken from the National Rifle Association.
A weeping 19-year-old Tyra Hemans held posters Thursday of her dead friends, along with one that said “ENOUGH NO GUNS (hash)GunReformNow.”
“I decided to make these signs so that when Donald Trump visits Parkland he knows that this is what I want. I want Congress to understand he took 17 lives from me yesterday. My friend will literally never get to say ‘I graduated high school,”’ she said through tears.
Parkland Vice Mayor Stacy Kagan said she was organizing a trip next week to Tallahassee to urge lawmakers to act on gun reforms. The city said Friday that details were not complete.
“We need every mom and every dad and every kid” in all the cities to come with us. “It’s time to say, `Enough. This is enough.”’
Since the massacre, money been flowing in to gun-safety groups, including Everytown for Gun Safety, a group backed by former New York City Mayor Michael Bloomberg that seeks stricter gun laws. The group said it has received $800,000 in unsolicited donations since Wednesday.
Students elsewhere have started joining the chorus from Parkland. On Friday, about 100 students from South Broward High School walked out of school to protest gun violence, carrying signs that said “Do Something” and “Protect our Kids, Not Your Guns.”
“We are angry! We are angry!” the students cried. “We want safety! We want safety!”
Survivors said they have been considering gun-control issues in new ways.
John Greenberg, a junior, said he does not understand how the shooting suspect, Nikolas Cruz, was able to purchase a gun despite past violence that led to his expulsion from the school a year earlier.
He said he and his friends are now much more aware of the law’s limitations.
“First and foremost, he shouldn’t be able to get a gun if he isn’t stable enough to have one,” Greenberg said. “I know he was 19 and an adult. Whether he had a mental illness or not, you can’t be in a stable mindset to do this.”
For all the latest World News, download Indian Express App
Publicado por salud equitativa en 4:03