Father of Palestine’s Icon: Everyone is Blaming my Daughter | Inter Press Service

Father of Palestine’s Icon: Everyone is Blaming my Daughter | Inter Press Service

Father of Palestine’s Icon: Everyone is Blaming my Daughter

Print | Send by email
As a video clip spread all over the world, so too did the name Ahed Tamimi. For Palestinians, she has become an icon of freedom. Arbetet Global met the father of the teenage girl that kicked and hit two Israeli soldiers. 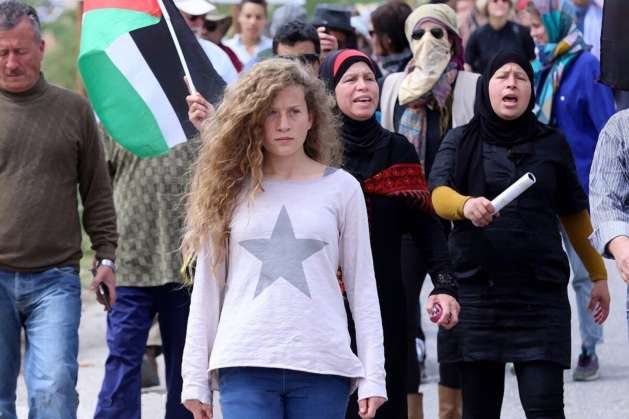 Ahed Tamimi. Foto: Wikimedia Commons
Palestine, Feb 16 2018 (IPS) - It is late morning. A clear blue sky. The quiet of the village is deceptive. Bassem Tamimi is the father of the teenage girl, Ahed Tamimi, who has become a symbol of Palestinian resistance to the Israeli occupation.
”All accusations are against my daughter, but no one mentions the soldier who shot a child in the head”.
His daughter will probably receive a long sentence. She was 16 when she attacked the soldiers but has turned 17 while in custody.
Her father knows. “They want to set an example!” he tells Arbetet Global in the family’s home in the village of Nabi Saleh, northwest of Ramallah.
“Follow me, come…” 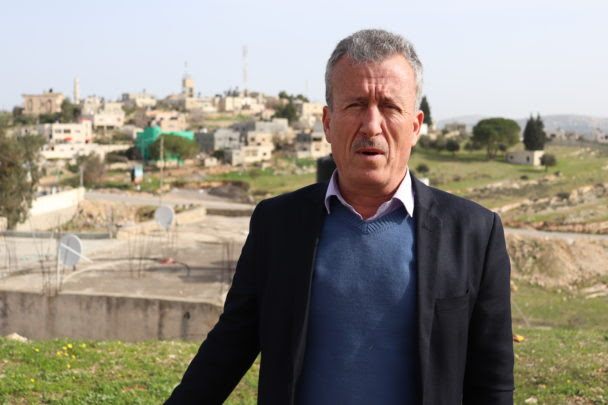 Bassem Tamimi outside the family’s house. Credit: Erik Larsson/Arbetet-Global
Bassem Tamimi takes swift steps across the yard. We come to a vantage point. From there we can see a beautiful mountainous terrain spread out for miles and miles. On the opposite slope we see a small village. The houses have red roofs. That shows that it is an Israeli settlement. The village is Halamish.
“Do you see the olive groves down that way?… they were mine once… before the settlement”.
Bassem Tamimi walks back towards the house where his daughter’s bed has remained unmade ever since she was arrested by the police.
He takes some plastic chairs out, motioning us to sit, and there in the yard, he retells what happened.
On the 6th of December 2017 Donald Trump announced that the US embassy in Israel would be moved from Tel Aviv to Jerusalem.
The decision was criticized by many countries that foresaw negative consequences for all efforts to find a peaceful resolution to this lengthy conflict.
There were protests in Nabi Saleh that led to clashes.
The Tamimi family’s house is on a hill and therefore has the perfect strategic position for monitoring everything going on in the village.
For several days, soldiers would use their position in the house’s yard to fire tear gas and rubber bullets at demonstrators.
“My son was hit in the hand by a rubber bullet”, Bassem Tamimi says. 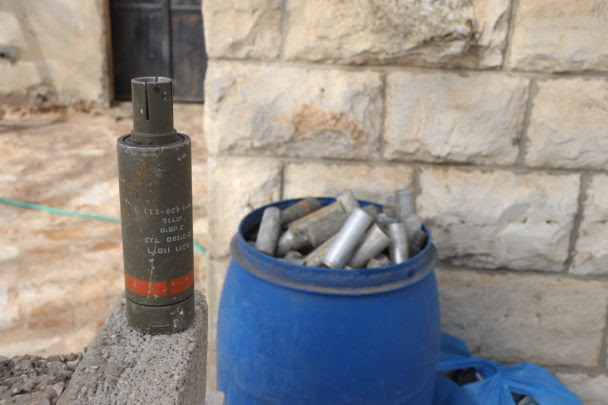 Tear gas shotguns used by Israeli soldiers. Credit: Erik Larsson/Arbetet-Global
On the 15th of December protests continued.
“In the morning we saw the soldiers outside our house. They shot a lot of teargas and rubber bullets, but we just sat down for breakfast.”
Bassem Tamimi left the house and went down to the village but was told afterwards what had happened.
A group of five armed soldiers entered the yard. Several of the children together with Bassem’s wife Narimam Tamimi tried to run them off the property.
“But then they shot Mohammed in the head. Just over there”. Bassem Tamimi points to a grey wall about 20 meters away.
Mohammed was 14 at the time. A cousin of Ahed Tamimi.
The rubber bullet was fired at close range and crushed parts of his skull. He lay in a coma for several days and was operated on numerous times. When he woke up, he had lost his vision in one eye.
“And now everyone puts the blame on my daughter”.
The video clip that has spread all over the world was recorded twenty minutes after the shooting.
In the clip Ahed Tamimi together with a group of children walk up to the two soldiers that are standing in front of the garage. She aims kicks at them, shouts at them, hits them. The soldiers move slowly away from the house.
This has led many Israelis to react. They feel the soldiers should have acted tougher towards the teenage girl.
The Israeli Minister of Education, Nafatali Bennett, has expressed that Ahed and the two other girls that can be seen in the video clip should be jailed for life.
A very different accusation has been levelled at the family as there have been several other clips that have shown Ahed confronting Israeli soldiers.
Some people have felt that the girl has been exploited in arranged films, used for propaganda. One such video, filmed when Ahed was only 11, shows her striking an Israeli soldier while her brother is being arrested.

I am proud that she is so strong.

Among Palestinians, Ahed is becoming a symbol for the resistance to the Israeli occupation.
One night, a few days after the incident, soldiers returned. They arrested Ahed Tamimi, her mother and Aheds cousin. They are to be tried in a military court. Many people believe she will receive a harsh sentence and spend several years in jail.
Does her father regret her actions and wish she hadn’t attacked the soldiers? He does not hesitate and answers
“No, and I would want her to act the same way if the soldiers return. This is the normal way to act when under occupation. It is our duty and our responsibility to react this way”, he retorts.
He says that every man in the whole world would want to have a daughter like Ahed.
“I am her father. I weep. I worry. I have all kinds of feeling and I am sad that the occupation has taken her childhood away from her. But I am also proud. I am proud that she belongs to a generation that can free Palestine. And I am proud that she is so strong”
The Tamimi family have a long history as part of the struggle for a free Palestine.
He tells Arbetet Global that he himself has been arrested a dozen times and been put in jail nine times.
“The first time was in 1993. I was tortured. The very day I was released, my sister was killed at the criminal court in Ramallah where she was visiting her son who was standing trial. She was pushed down a staircase and beaten to death”.
In other previous interviews he has claimed to be inspired by the non-violence philosophy of Gandhi and when he was arrested in 2012 in a peaceful demonstration on the West Bank, Amnesty International declared him a prisoner of conscience.
When asked to explain the conflict between his village and the Israeli settlement on the other side of the valley, he says that the question is mistakenly formulated. The problem is the occupation.
At the edge of the village where the road leads in, there is a high tower of concrete and barbed wire.
”Down there, at the roadblock, they can suddenly close off the road. Last night it was closed for three or four hours. And you never know when it will happen. Last week I had a meeting in Ramallah but I could not get there because the road was closed.”
”The occupation affects every detail in our lives. It’s not just a word or a roadblock. It hurts our everyday life, our future and our feelings.”
Translation: Ravi Dar
This story was originally published by Arbetet Global