At a forum organized by EL PAÍS, the president of the European Commission warned of the rise of the far right, pointing to Austria and Bulgaria as examples 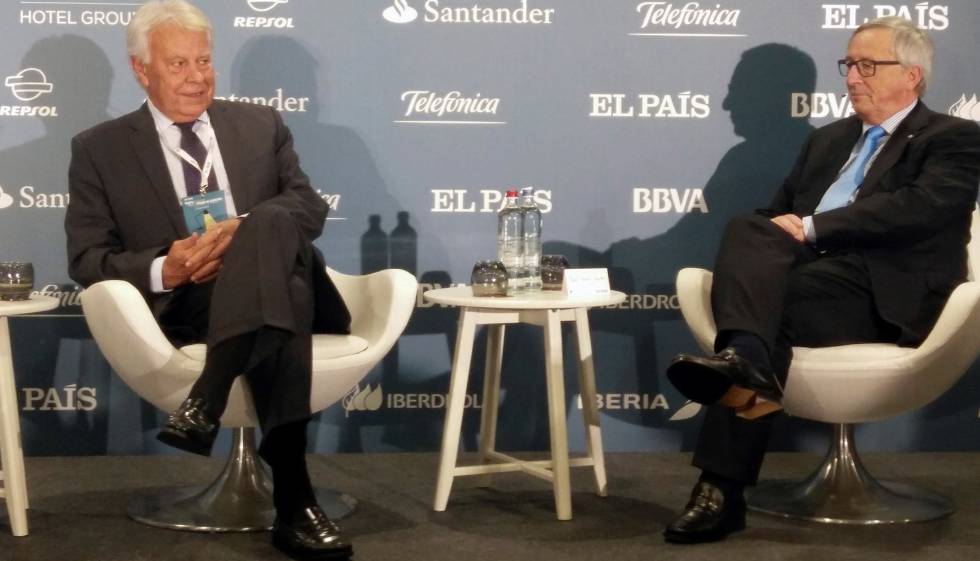 
The president of the European Commission, Jean-Claude Juncker, has warned of the danger of populism and the rise of the far right at a special forum organized by EL PAÍS. In a discussion with former Spanish Prime Minister Felipe González, Juncker said that these two political trends were more alarming than any other problem facing the world today. Worse than an increasingly aggressive Russia or China is the right-wing extremism growing in Europe’s own backyard, he said.

Juncker warned that “the risk is still there – it hasn’t disappeared and we have to fight it.”
“Nationalism is the real war,” he said, arguing the far right had been emboldened by wins in Bulgaria, where United Patriot ultra-nationalists were recently voted into government, and in Austria, which is now ruled by two parties known for vilifying refugees and with links to neo-Nazi movements.
“The problem is not so much about ultra-right parties but the fact traditional parties are adopting their proposals,” said Juncker, who identifies as center-right on the political spectrum.

Gonzaléz praised Spain for not falling victim to populist politics, “with the exception of Carles Puigdemont,” but said that more needed to be done to tackle social problems.
“The EU will have problems if it forgets to address the social pillar, unemployment, inequality,” he said.
Growth in Europe is around 2.5% and in Spain it is above 3% but more than 20 million people are unemployed across Europe (more than four million in Spain) and the effects of the economic crisis can still seen in shocking rates of poverty, said Gonzaléz. The accumulation of debt and issues within the finance sector are other warning signs that the continent has not recovered from the crisis.
During the discussion, held in Brussels as part of the Spain 40-40 activities in honor of the 40th anniversary of Spanish democracy, the leaders also talked about the migration crisis (which has calmed since its peak in 2015), the impact of the United Kingdom’s exit from the EU, and the recent terrorist attacks in Europe.
The former Spanish Prime Minister Felipe Gonález has said that a political solution must be found to the crisis in Catalonia but that this “does not excuse nationalists from meeting their responsibilities before the law.”
He said that ousted Catalan premier Carles Puigdemont “has every right, starting from the presumption of innocence, to the right to representation, while no judicial ruling impedes him, but he is obliged to the people to appear before judicial authorities to, as they say in Latin America, face the law.
“The first duty of a democratic citizen is to make yourself available to the justice system if it is looking for you. And if you are innocent, there’s no problem,” he added.
Publicado por salud equitativa en 6:22