In one of the crowded settlements of corrugated-metal homes, resident Vuyo Kazi washed her laundry outside as others poured used water into the street. "Before, I was using two kettles of water to wash myself,'' she said. "So now I use one kettle of water.'' 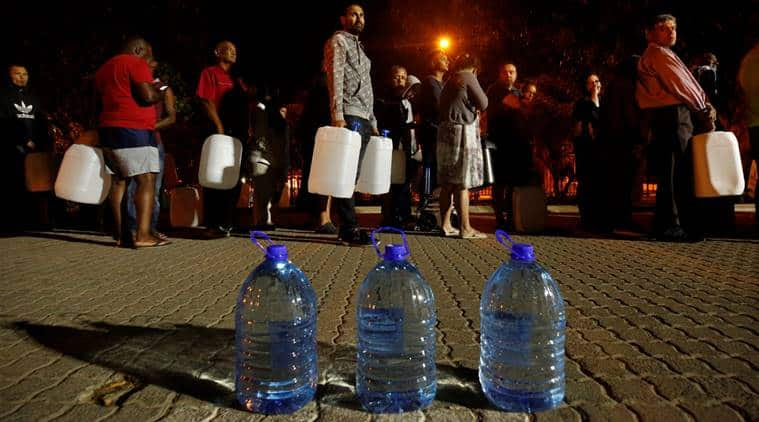 People queue to collect water from a spring in the Newlands suburb as fears over the city’s water crisis grow in Cape Town, South Africa. (Reuters)
“Day Zero” is approaching as South Africa’s showcase city of Cape Town prepares to turn off most water taps amid the worst drought in a century. Tensions among the four million residents are highlighting a class divide in a country with one of the world’s highest rates of inequality. Cape Town, a top international tourist destination, has both sprawling informal settlements and high-income oceanside neighborhoods. Some say poorer residents are unfairly blamed as concerns rise over wasting precious water. The military is prepared to help secure water collection points if “Day Zero” occurs.
The Associated Press is exploring how residents are coping as water restrictions tighten in an attempt to avoid the possible shut-off in mid-April, and it spoke with researchers about where the water usage problems lie. Kirsty Carden with the Future Water Institute at the University of Cape Town pointed to the city’s leafy suburbs. “It has been in the areas where people have gardens, they have swimming pools and they are much more profligate in the way that they use water, because they’re used to the water just being, coming out of the taps,” she said. Some residents appear to be changing their ways, she said, but “there have been problems in the more affluent areas where people are just, `We’ll pay for it.”’ People queue to collect water from a spring in the Newlands suburb as fears over the city’s water crisis grow in Cape Town, South Africa. (Reuters)
About a quarter of Cape Town’s population lives in the informal settlements, where they get water from communal taps instead of individual taps at home, Carden said. “And there are always pictures of running taps and broken fixtures and `Look at the leakage’ and all the rest. But the reality is that those 1 million people out of a population of 4 (million) only use 4.5 percent of the water.”
In one of the crowded settlements of corrugated-metal homes, resident Vuyo Kazi washed her laundry outside as others poured used water into the street. “Before, I was using two kettles of water to wash myself,” she said. “So now I use one kettle of water.”
Under new water restrictions that began Thursday, residents are asked to use no more than 50 liters (13.2 gallons) of water daily, down from the previous limit of 87 liters (23 gallons). The use of city drinking water to wash vehicles, hose down paved areas, fill up private swimming pools and water gardens is illegal. Residents using too much water will be fined.
Across the city, in the seaside town of Scarborough, resident Kelson da Cruz demonstrated the new normal of water rationing, pointing out the bucket beside his shower. The city has even promoted a Two-Minute Shower Songs project by top South African artists to keep water usage down.
“We are restricted with an amount of the water that we can use per day,” da Cruz said. “So we collect that water, and that water you can use to flush the toilet.” Another jar of water is used for tooth-brushing and face-washing. People queue to collect water from a spring in the Newlands suburb as fears over the city’s water crisis grow in Cape Town, South Africa. (Reuters)
Some 70 per cent of water used in Cape Town is consumed in homes, authorities say. Experts have said causes of the city’s water shortages include climate change and huge population growth. The local reliance on reservoirs, while projects such as desalination plants were largely left to the future, has been hurt by three straight years of drought.
Scientists are watching how authorities cope, as this would be the world’s first major city to go dry. “We always open the tap, the water is there, easy,” da Cruz said. “I was lucky to travel to some dry countries where water has always been a big issue. So when we moved to South Africa that has always been on the back of our mind. And I think South Africa is for the first time is really catching up with the rest of the world. They have to change their habits. You can’t just take for granted something so precious.”