Armored vehicles rolled through the streets of one neighborhood on Guanabara Bay, while boats patrolled the waters. Soldiers set up checkpoints and searched everyone leaving or entering during the morning commute. 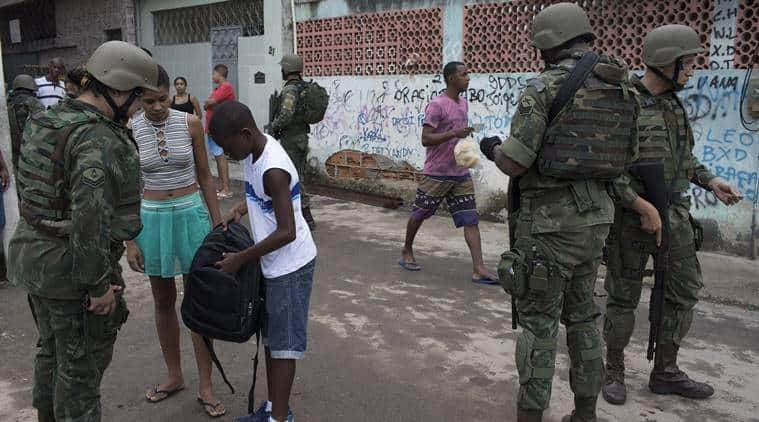 Brazilian marines search the back pack of a student during surprise operation in Kelson’s slum in Rio de Janeiro in Brazil. (Source: AP)
Brazil’s congress approved a decree to put the military in charge of Rio de Janeiro’s security forces on Tuesday as soldiers and police spread out throughout in the city to combat rising crime.
The military officially took over Rio’s police on Friday, but the presidential decree still needed congressional approval. Brazil’s lower house approved the measure early Tuesday and the Senate closed the matter shortly before midnight.
Details of the plan are still to be announced, though, generating doubts even among supporters of the move.
Overnight, the armed forces and police spread out in Rio in the first major operation since the change in command. They took up positions on major roads that connect Rio with the rest of the country in an effort to prevent drugs, illegal arms and stolen goods from entering the city, said Col. Roberto Itamar, a military spokesman. Around 3,000 members of the armed forces were involved.
Armored vehicles rolled through the streets of one neighborhood on Guanabara Bay on Tuesday, while boats patrolled the waters. Soldiers and police set up checkpoints and searched everyone leaving or entering during the morning commute.
By Tuesday evening, 11 people had been detained and six guns, six grenades and a large quantity of drugs had been seized, the state security department said.
The operation was planned before the new military commander took over, and he has yet to lay out his plan for tackling the wave of violence in Rio. But Itamar said the military intervention would go beyond the mere use of soldiers in the streets.
“The population will see an improvement in the actions of the institutions that are constitutionally responsible for public security in Rio de Janeiro,” he said in an interview with The Associated Press.
Security in Rio has been deteriorating for at least two years as the state experiences a deep fiscal crisis. Rio’s governor, Luiz Fernando Pezao, said a stronger economy would be crucial to combatting crime in Rio.
“We will only win the security war with formal sector jobs,” he said Tuesday.
The decree has caused unease in Brazil, where many still remember the 1964-1985 military regime, and has raised concerns that the heavy-handed tactics that police have used in the past will increase.
For all the latest World News, download Indian Express App
Publicado por salud equitativa en 4:51