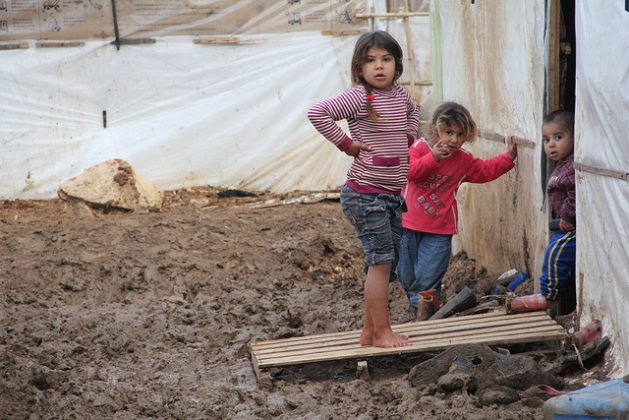 Syrian refugee children learn to survive at a camp in north Lebanon. Credit: Zak Brophy/IPS
UNITED NATIONS, Dec 2 2017 (IPS) - The UN has made its largest appeal to work towards reaching the more than 135 million people across the world in need of humanitarian assistance and protection.
Upon comprehensively assessing world humanitarian needs, the UN found that the number of people in need of humanitarian assistance has increased by more than 5 percent.
As a result, the institution has launched its strategic humanitarian response plans which aim to reach 91 million of the most vulnerable with food, shelter, health care, and education in 2018.
The ambitious plan will require a record 22.5 billion dollars, slightly higher than the 22.2 billion appeal made in 2017.
“Investing in coordinated response plans is a sound choice. It delivers tangible and measurable results, and has a proven track record of success,” said Under-Secretary-General for Humanitarian Affairs and Emergency Relief Coordinator Mark Lowcock.
In 2017, donors provided a record level of funding of 13 billion dollars to help humanitarian agencies reach and save tens of millions of people, including those who experienced unprecedented famines in four different countries.
However, 46 percent of the 22.2-billion-dollar appeal remains unfunded.
“Humanitarians can only respond to the growing needs with the generous support of our donors,” said Lowcock during a press conference.
CEO of Save the Children Helle Thorning-Schmidt echoed similar sentiments, noting the need for NGOs to use funding more effectively, as well as donor governments to invest in long-term development.
“[We] need governments and institutions to take a longer term approach by tackling the cause of these crises as well as the symptoms. By brokering peace agreements, investing in education, helping communities build resilience to climate shocks, and speaking up when people are persecuted. Without this, we will continue to see a record level of suffering,” she said.
“There are very few humanitarian crises that can be solved by humanitarian interventions alone,” Lowcock reiterated.
The crisis in Yemen continues to be the most urgent and will require a scaled up response in 2018.
Over 22 million Yemenis, representing over 70 percent of the population, require humanitarian assistance. This includes the 7 million who are on the brink of famine, which has only exacerbated since the Saudi-led coalition imposed a blockade.
Though the blockade has been partially lifted, Lowcock urged for a complete reversal in order to avoid an even bigger catastrophe.
Humanitarian needs will also continue to be high in Syria in 2018 unless a political solution is reached.
As hostilities are ongoing, access to those with the most need still remains constrained, particularly to the over 900,000 in UN-declared besieged areas and almost 3 million living in hard-to-reach areas.
The proportion of the population living in extreme poverty in the Middle Eastern nation has doubled from almost 34 percent before the conflict to almost 70 percent today. Limited access to income and livelihood opportunities has doubled the number of people at risk of food insecurity.
Lowcock pointed to the crisis in the Democratic Republic of Congo as among the most neglected, with only 40 percent of its appeal funded.
The increase in violence, which is expected to worsen, forced almost 2 million people to flee their homes in 2017, bringing to the total number of internally displaced persons to over 4 million—the highest number of any country on the African continent.
As the majority of the world’s humanitarian crises are driven by conflict, Thorning-Schmidt urged for action to help protect the most vulnerable, including children.
“If we don’t do anything extraordinary, we will end up stealing these children’s futures twice,” she said. “We have to put even more pressure on the global community and on warring parties to make peace.”