Debate on Glyphosate Use Comes to a Head in Argentina 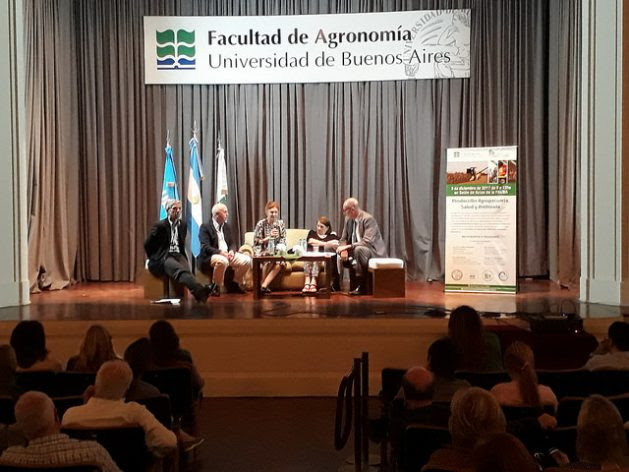 Academics discuss the impacts on health and the environment of the use of glyphosate in Argentine agriculture, during a Dec. 6 conference at the University of Buenos Aires. Concern about this topic is now on the country’s public agenda. Credit: Daniel Gutman / IPS
BUENOS AIRES, Dec 8 2017 (IPS) - In and around the city of Rosario, where most of Argentina’s soybean processing plants are concentrated, a local law banned the use of glyphosate, the most widely-used herbicide in Argentina. But two weeks later, producers managed to exert enough pressure to obtain a promise that the ban would be overturned.
This episode, which took place in November, reflects the strong economic interests at stake and the growing controversy surrounding the use of agrochemicals and their impact on people’s health and the environment.
“Agriculture in Argentine has undergone major changes in recent decades and consolidated its agroindustrial model, strongly based on soy, which displaced wheat and corn,” explained Emilio Satorre, professor and researcher at the University of Buenos Aires (UBA) department of agronomy.
“The sown area climbed from 15 to 36 million hectares, 60 to 65 percent of which are covered with genetically modified (GM) soy, while the use of phytosanitary products increased threefold. This system generated great wealth for the country, but of course it produces greater risks,” he told IPS.
For Satorre, “society is increasingly exacting… and the environment and health have become a central focus.”
Glyphosate accounts for over half of the agrochemicals used, since the government authorised in 1996 commercial sales of GM soybean resistant to that herbicide, which was then produced exclusively by Monsanto, the US biotech giant with a large subsidiary in this South American country.
Along with direct seeding or no-till systems, which avoid soil tillage and mitigate erosion, glyphosate and GM soy form the foundation on which the phenomenal expansion of agriculture has been based in this country of 44 million people, where the agro-livestock sector represents about 13 percent of GDP.
This growth took place at the expense of the loss of millions of hectares of natural pastures in La Pampa, one of the world’s most fertile regions in the centre of the country, and of native forests in the Chaco, the northern subtropical plain shared with Bolivia and Paraguay.
Large-scale soy production expanded so much that it reached the edge of many urban areas.
One of them is Córdoba, the second-biggest city in the country, located in the central region. There, a group of women have put Ituzaingó – a working-class neighborhood – on the national map since 2002.
It was when they mobilised to protest about a large number of cases of cancer and malformations, which they blamed on the spraying of soy crops that grew up to a few metres from their homes. 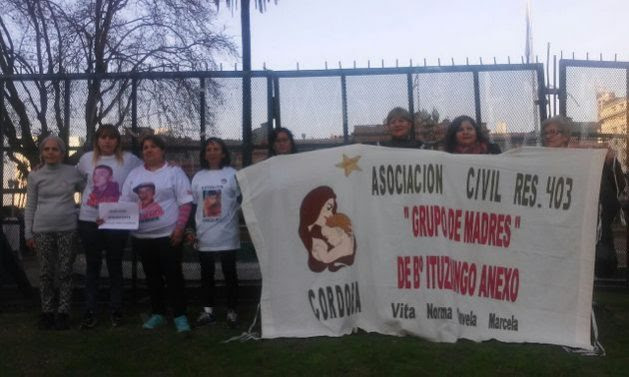 The Mothers of Ituzaingó, a neighbourhood on the outskirts of Córdoba, the second-biggest city in Argentina, have taken their fight against agrochemicals, because of its impact on the health of their community, to the emblematic Plaza de Mayo in Buenos Aires. Credit: Courtesy of Mothers of Ituzaingó
With their struggle, the Mothers of Ituzaingó obtained a judicial ruling that banned fumigations closer than 500 metres from their houses, as well as the criminal conviction of an agricultural producer and a fumigator.
They became a beacon of hope for many social movements in the country.
“I started when my daughter, who was three years old, was diagnosed with leukemia. Today thanks to God she is alive and they haven’t sprayed here anymore since 2008, but we were poisoned for years and people are still getting sick,” said Norma Herrera, a homemaker who has five children and two grandchildren.
“It was a very hard struggle at the beginning. Over the years the facts have proved us right, but we were never able to get professionals to scientifically establish the connection between the spraying and the health problems,” Herrera told IPS.

Thanks to the social movement of which the Mothers of Ituzaingó were pioneers, a decision was reached Nov. 16 by the city council in Rosario to ban glyphosate.
The provision placed emphasis on a study carried out by the International Agency for Research on Cancer (IARC), the specialised cancer agency of the World Health Organisation, which declared the herbicide a “probable carcinogen” two years ago.
The decision took agricultural producers by surprise. At the time they seemed more worried about the uncertainty over whether the European Union would or would not renew the licence for the use of glyphosate, which was to expire on Dec. 15.
A negative decision would cause a severe economic impact for Argentina, the sector’s business chambers warned.
But on Nov. 27 the EU agreed in Brussels to renew the licence for the herbicide for five years, with the votes of 18 countries against nine and one abstention.
In 2016, Argentina’s agricultural exports totaled 24 billion dollars, equivalent to 46 percent of the country’s total exports, while soy meal, cornmeal and soy oil accounted for the main sales abroad.
Three days after the EU’s decision, the heads of rural entities went to Rosario’s city hall and convinced the same city councilors who had banned glyphosate that there was no “scientific evidence” warranting such a decision.
A few hours later, several city councilors said they had not discussed the issue with the necessary depth.
As a result, although the provision is not yet in force because it was not signed by the city government, a new municipal bill was drafted, which authorises spraying with the herbicide with certain precautions, and is set to be discussed this month.
“We consider it deplorable that the councilors have reversed the commendable decision to protect the health and environment of the population of Rosario, yielding to pressure from the soy lobby and showing who truly governs” said a group of more than 10 environmental and social organisations.of the region in a press release.
For Lilian Correa, head of Health and Environment at the UBA school of medicine, “the next generation of Argentinians must put on the table the cost-benefit equation of the current productive model. Today, the impact on health and the environment is not measured.”
Correa warned about the prevailing apathy in Argentina regarding the regulation and handling of toxic agrochemicals, citing the case of endosulfan, an insecticide banned in 2011 by the Conference of the Parties to the Stockholm Convention on Persistent Organic Pollutants.
“When that happened, Argentina set a two-year deadline to sell off stocks of endosulfan. That was done to benefit a company, in an unethical and illegal manner,” Correa said during a Dec. 5 conference at the UBA agronomy department
In 2011, a four-year-old boy died in Corrientes, in the northeast of the country, poisoned when endosulfan was sprayed on tomato crops less than 50 metres from his house.
In December 2016, the owner of the tomato plantation in question became the first person tried in Argentina for homicide through the use of agrochemicals.
However, the court considered that no negligence could be proven in the use of the substance, which at that time was permitted, and acquitted him.