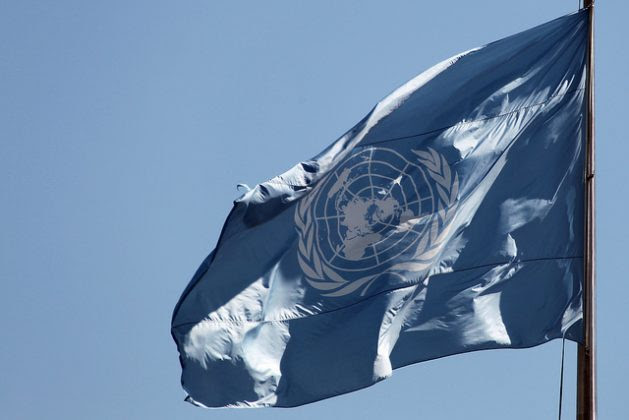 The UN flag. Credit: Sriyantha Walpola/IPS
ROME, Nov 30 2017 (IPS) - While the top priority of any development strategy is still the same – to leave no one behind – the new challenges that have emerged show the need to adapt the actions necessary to face them.
This appears to be the key rationale behind the new 21 century development plan, which identifies six “signature solutions” against which the UN development agency will align its resources and expertise to make a real impact on poverty, governance, energy access, gender equality, resilience and environmental sustainability.
“This is a new plan for a new era,” said Achim Steiner, Administrator of the United Nations Development Programme(UNDP) while announcing on 28 November the new development Strategic Plan, which he characterised as a new and ambitious blueprint for development in the 21st century.
Six key areas of collaboration among four UN agencies:

(a) Eradicating poverty;
(b) Addressing climate change;
(c) Improving adolescent and maternal health;
(d) Achieving gender equality and the empowerment of women and girls;
(e) Ensuring greater availability and use of disaggregated data for sustainable development;
(f) Emphasising that development is a central goal in itself, and that in countries in conflict and post-conflict situations the development work of the entities of the UN development system can contribute to peace-building and sustaining peace, in accordance with national plans, needs and priorities and respecting national ownership.

SOURCE: UNDP
Dramatic Changes
“The dramatic changes we see in the world have occurred on such a scale and at such a pace that our institutions are struggling to keep up. More is being demanded of us.”
The nations of the world have committed to achieving the 2030 Agenda and the UN system has been tasked to support them, Steiner continued, adding that this is the driving force of the Secretary-General’s UN reform agenda, and we must rise to the challenge.
The new strategic plan, which covers a four–year period (2018-2021), is anchored in the 2030 Agenda for Sustainable Development and is committed to the principles of universality, equality and leaving no one behind.
The plan sets out a vision for the evolution of UNDP over the next four years, responding to a changing development landscape and the evolving needs of partners.
Building on the agency’s 50 years of experience, it describes how it will support countries to achieve the 2030 Agenda and the Sustainable Development Goals and related agreements.
Poverty, Transformations, Resilience
This plan has been designed to be responsive to the wide diversity of the countries we serve, Steiner said.
“This diversity is reflected in the three broad development settings described in the plan: eradicating poverty; structural transformations; and building resilience. It also describes how our two new platforms; country-level and global, will enable UNDP to deliver our support in a more effective way.” 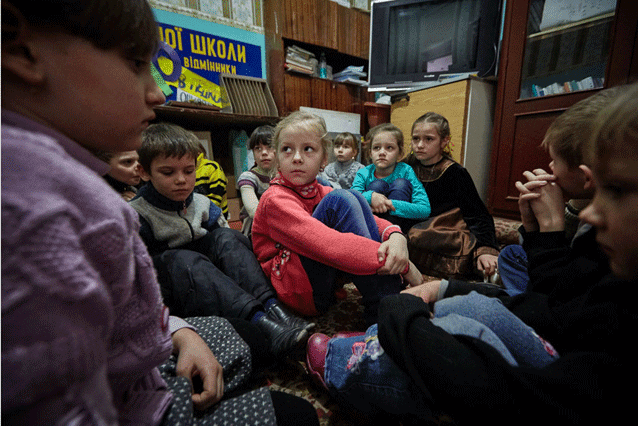 On 13 February 2017, first-grade students in eastern Ukraine, including 6-year-old Sasha (in red sweater), participate in a drill to practice their response to a shelling. Credit: UNICEF/UN053119/Zmey
As well as formally endorsing the plan, the Board approved UNDP’s integrated resources plan and integrated budget estimates 2018-2021.


UNDP’s Executive Board is made up of representatives from 36 countries and provides inter-governmental support to and supervision of UNDP activities, ensuring that the Organization remains responsive to the evolving needs of programme countries.
Commenting on the new plan, the President of the UNDP Board Ib Petersen, Permanent Representative of Denmark, stated that the plan is an essential tool for the organisation to continue to evolve and adapt over the next four years.
On the ground in nearly 170 countries and territories, this UN agency offers global perspective and local insight to help empower lives and build resilient nations.
The agency’s vision for the Strategic Plan is to help countries achieve sustainable development “by eradicating poverty in all its forms and dimensions, accelerating structural transformations for sustainable development and building resilience to crises and shocks.” 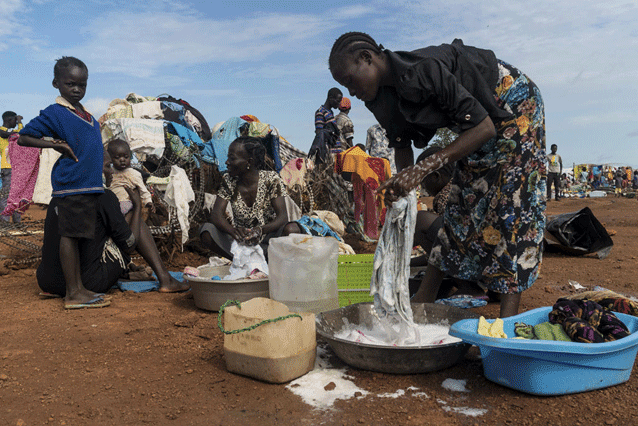 Four billion people have no social security protection. Ronda (right), who has been living in the open, washes clothes in the UN Protection of Civilians Site that houses thousands of displaced people in Wau, South Sudan. Credit: UNICEF/Ohanesian (file)
The plan describes how UNDP will better adapt to the range of country contexts in which it works, framed through:


(a) The three broad development settings to which its approach responds;
(b) A series of signature solutions that define the agency’s core work;
(c) The two platforms through which it will deliver its work; (i) Country support platforms for the Sustainable Development Goals; (ii) A global development advisory and implementation services platform;
(d) An improved business model to underpin our efforts.
Four UN specialised agencies, among others, are set to join efforts to implement the new strategy: UN Development Programme (UNDP), UN Population Fund (UNFPA), UN Children’s Fund (UNICEF), and UN Entity for Gender Equality and the Empowerment of Women (UN-Women).