Q&A: “What Price Do We Put on Our Oceans?” | Inter Press Service

Q&A: “What Price Do We Put on Our Oceans?” | Inter Press Service 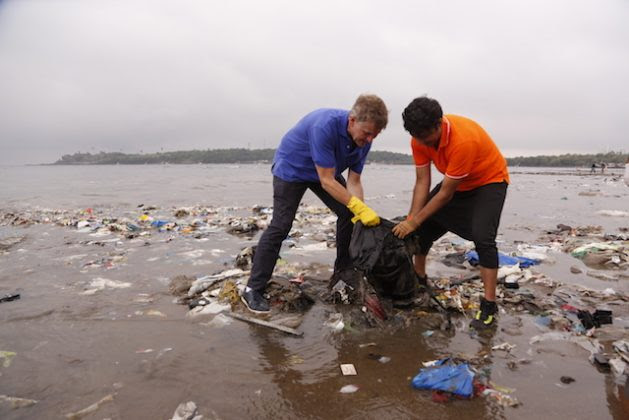 Erik Solheim participates in the largest beach clean-up in history at Versova Beach Clean-Up in Mumbai, India, in October 2016. Photo courtesy of UNEP
NAIROBI/NEW DELHI, Dec 1 2017 (IPS) - “Political resolve is the key for succeeding in our fight against oceans pollution,” Erik Solheim, head of UN Environment, who is leading hands-on the organisation’s global campaign to clean up seas and oceans of plastic litter, agricultural run‑off and chemical dumping, told IPS.
“It’s about building capacity for strong environmental governance and bolstering political leadership on these issues,” said Solheim, who previously served as Norway’s Minister of the Environment and International Development.
“If action is not taken today, we’re lining ourselves up for the ultimate cost – the destruction of our oceans – down the line."
“One of the big changes has been an understanding of the issue (of marine pollution) and a realization that we are facing an extremely serious problem. As a result, we’re starting to see a range of initiatives,” he said.
“On the community level, there are people like Afroz Shah and Mumbai’s Versova Beach clean-up team, for example. They’re really doing an amazing job of drawing attention to the problem.
“Then we’re seeing the “private sector begin to take serious action,” he said. “For example, Dell is changing its packaging. Certain big national and international chains are changing their practices – for example by using paper instead of plastic, or cutting out plastic straws.
“Then we have government action, which is crucial. Certain countries have banned microplastics, some have banned plastic bags. Kenya, Rwanda and Bangladesh, for example, are recognised global leaders on plastic pollution,” he added.
“This points to a growing understanding of the marine litter problem and a resolve to take concrete action. Ultimately, the problem of marine litter is upstream. We need industries to change. We need people to exercise their power as consumers,” Solheim said.
In what Joachim Spangenberg of Germany’s Helmholtz Centre for Environment Research called the “political economy” of pollution, where vested-interest lobbies profit by externalizing costs of production and discharging unwanted waste into the environment, anti-plastic law-makers are up against a global plastic industry worth 654 billion dollars by 2020. Dow Chemicals, Du Pont, BASF, ExxonMobil, and Bayer are key players invested in the sector.
But Spangenberg too says that heads of government have great power to address this “political economy” of pollution.
Oceans are the new economic frontier, but ill health eating into its potential
Between 2010 and 2030 on a business‑as‑usual scenario, the ocean economy could double its global value added to 3 trillion dollars and provide 40 million jobs, the Organisation for Economic Co-operation and Development’s (OECD) major 2016 study said.
Ocean is the new economic frontier, it said, its growth driven by traditional and emerging ocean-based industries, marine food, energy, transport, minerals, medicines, tourism and innovations.
But OECD warns the oceans’ undermined health would cut into its full growth potential.
“We need governments to make polluters pay, and to ensure we work harder on recycling, reuse and waste management. The solution is stopping the waste ending up in the ocean in the first place,” Solheim told Inter Press Service. 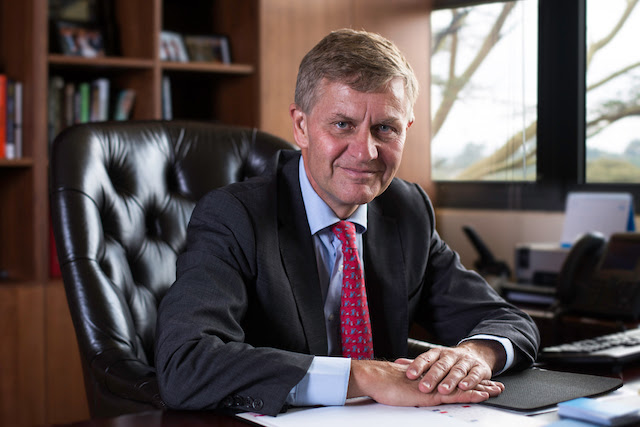 UN Environment chief Erik Solheim. Photo courtesy of UNEP
Pollution from plastic waste in oceans is costing 8 billion dollars
“Pollution from plastic waste being dumped in the ocean is costing the world at least 8 billion dollars every year, but this estimate is certain to be an underestimate when we factor in the cumulative, long-term consequences,” said the UNEP chief.
Between 4.8 million tonnes and 12.7 million tonnes of plastic waste enter the ocean every year, 80 percent of it from land sources due to inadequate waste management.
According to the Worldwatch Institute, plastic production is increasing 4-5 percent annually.
Plastic pollution is everywhere; even a tiny uninhabited island in the Pacific Ocean far from human contact had 18 tonnes of plastic washed up on it. Plastic waste was found at 36,000 feet in depth – the deepest spot in the ocean in the Mariana trench, he points out.

Plastic aside, land-based sources pump in the maximum waste and pollutants into oceans and coastal waters, mostly through rivers. Farming, food and agro-industry, fisheries and aquaculture, oil and energy sector, waste, wastewater, packaging sector, extractives and pharmaceuticals are major sources.
In coastal regions where 37 percent of the global population lives, these pollutants can stunt neurological development, cause heart and kidney disease, cancer, sterility and hormonal disruption.
Among the little know impacts on marine creatures, ingestion of microplastics (size less than 5 mm) by fish can affect female fertility and grow reproductive tissue in male fish causing their feminization. Chemicals in plastic cause thyroid disorder in whales, physiological stress, liver cancer, and endocrine dysfunction, says UNEP’s 2017 pollution report.
“Then of course we have to look at waste to the economy of plastics being produced, used for a few seconds or minutes and then dumped,” Solheim said.
Why are many law-makers still dragging their feet on strong anti-plastic policies?
Environmental activists say regulating marine pollution needs bold and several restrictive, unpopular policies that on which elected law makers are seen to be dragging their feet.
“It’s a case of presenting environmental action in a positive, constructive way. We need to stop looking at it as a cost or sacrifice, but as an opportunity, a win for health, benefits for the economy and for the planet,” Solheim counters the critics.
The Kenyan government recently banned single-use plastic bags. “There were inevitably complaints from some manufacturers, but we have to consider what the benefits are from making the switch to more sustainable packaging.
“There are business opportunities. There are benefits to tourism, as nobody wants to go on a safari and see plastic bags blowing across the savannah, or spend a holiday on beaches littered with plastic. There are benefits to the food chain too. We’ve seen cows whose stomachs were filled with plastic,” he added.
Actions don’t need to be unpopular. For example, “does any country have a policy to throw rubbish into the sea?” “Certainly not! If that was a real policy, people would be justifiably furious.” he said. But that is what has happened, in the absence of strong policies.
“For too long, the relationship between prosperity and environment has been seen as a trade-off. Tackling pollution was considered an unwelcome cost on industry and a handicap to economic growth,” Solheim says in his ‘Vision for a Pollution-free Planet,’ in the run-up to the UN Environment Assembly. “(But) it’s now clear that sustainable development is the only form of development that makes sense, including in financial and economic terms,” he adds.
“If action is not taken today, we’re lining ourselves up for the ultimate cost – the destruction of our oceans – down the line. It’s cheaper to prevent pollution now than clean up in the future,” he told Inter Press Service.
“That’s the message we really need to get across, so that governments can feel inspired and emboldened to take action.
“After that, what price do we put on our oceans? They sustain human life in such a way that surely we need to look at the oceans as priceless,” Solheim said.
“We have to look at pollution as a factor alongside climate change and over-fishing. We have to look at oceans as interconnected,” Solheim said.
Keeping marine litter high on national environmental policy agendas of the 193 member nations, pollution is the focus of the 2017 UN Environment Assembly 4-6 December at the UN headquarters of Nairobi.
The UN Environment Assembly is attended by 193 member states, heads of state, environment ministers, CEOs of multinational companies, NASA scientists, NGOs, environmental activists, and celebrities to discuss and make global commitments to environmental protection.