Shedding Diplomacy, Roberto Savio Speaks about Fear as a Tool to Gain Power

Print | Send by email
This op-ed by Roberto Savio, IPS founder and President Emeritus is adapted from a statement he made as a panelist on Migration and Human Solidarity, A Challenge and an Opportunity for Europe and the MENA region held on 14 December at the Geneva Centre for Human Rights Advancement and Global Dialogue.
ROME, Dec 14 2017 (IPS) - At the outset my thanks to Dr Hanif Hassan Ali Al Kassim, and Ambassador Idriss Jazairy who lead the Centre for Human Rights Advancement and Global Dialogue for organizing this panel discussion at a critical moment in history. The Centre, is one of the few actors for peace and cooperation between the Arab world and Europe. As a representative of global civil society, I think it will be more meaningful if I speak without the constraints of diplomacy, and I make frank and unfettered reflections. 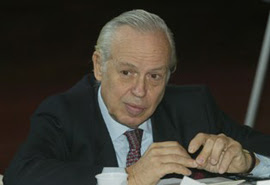 Roberto Savio
The misuse of religion, of populism and xenophobia, is a sad reality, which is not clearly addressed any longer, but met with hypocrisy and not outright denunciation. Only now the British are realizing that they voted for Brexit, on the basis of a campaign of lies. But nobody has taken on publicly Johnson or Farage, the leaders of Brexit, after Great Britain accepted to pay, as one of the many costs of divorce, at least 45 billion Euro, instead of saving 20 billion Euro, as claimed by the ‘brexiters’. And there are only a few analysis on why political behaviour is more and more a sheer calculation, without any concern for truth or the good of the country.