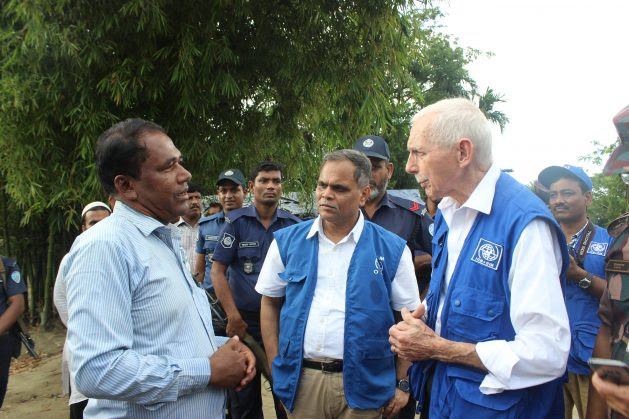 IOM Director General William Lacy Swing (right) visits Rohingya refugee camps in Bangladesh. Photo courtesy of IOM
DHAKA, Bangladesh, Dec 5 2017 (IPS) - In less than four months, over 600,000 Rohingya refugees have fled brutal persecution in Myanmar to seek safety across the border in Bangladesh. They are now crowded into camps across a stretch of 30 kms in Cox’s Bazar, a southeastern coastal region of the small South Asian nation.
The UN migration agency, International Organisation for Migration (IOM), has appealed to the international community for urgent funds. Over 344 million dollars was pledged recently at an international meeting to ramp up the delivery of critical humanitarian assistance. IOM stressed that the international community must work together to help to bring about a political resolution to the Rohingya crisis.
We all need to work to create the conditions that will allow the refugees to eventually return voluntarily to Myanmar in safety and dignity.
IOM, at the request of the government of Bangladesh, has been leading the Inter Sector Coordination Group (ISCG), which is coordinating the humanitarian response to the influx of Rohingya refugees.
This appeal outlines IOM’s funding requirement from September 2017 to February 2018 as a part of the wider UN Humanitarian Response Plan.
William Lacy Swing, IOM’s Director General, told IPS Correspondent Naimul Haq that any durable solution must be a political one agreed between Bangladesh and Myanmar and supported by the international community.
Swing said that all stakeholders need to work to create the conditions that will allow the Rohingya refugees to eventually return voluntarily to Myanmar in safety and dignity.
He praised the Bangladesh government’s mobilization of its own resources, as well as the local community’s support to help the refugees. Swing went on a four-day visit in mid- October to several camps in Cox’s Bazar.
Following are the excerpts from the interview.
Q. During your visit to various camps, you witnessed the horror, heard the victims and saw the difficult situation prevailing in the camps. How do you compare the Rohingya exodus with the recent similar refugee crisis like in Syria?
A. The Rohingya refugee crisis, although much smaller than the exodus of five million people from Syria since 2011, is equally severe in many ways. It has unfolded at extraordinary speed with over 600,000 people arriving in a single, relatively small district – Cox’s Bazar – since August 25th. By contrast the Syrian civil war has resulted in Syria’s neighbors, notably Turkey, Jordan, Lebanon, and Iraq, all hosting large numbers of Syrian refugees. But the speed, scale and complexity of what is now happening in Cox’s Bazar has created a major global humanitarian emergency. The needs on the ground for shelter, food, clean water, sanitation and healthcare are enormous. When this happened, none of us – neither humanitarian agencies nor the government of Bangladesh – were fully prepared to cope with an influx of this magnitude in such a short space of time.

Q. In a joint statement about relief for the Rohingyas, you said, “Much more is urgently needed. The efforts must be scaled up and expanded to receive and protect refugees and ensure they are provided with basic shelter and acceptable living conditions. They [Rohingyas] are fully dependent on humanitarian assistance for food, water, health and other essential needs. Basic services are under severe strain. In some sites, there is no access to potable water and sanitation facilities, raising health risks for both the refugees and the communities hosting them.” How do you plan to expand the distribution and what is the estimated cost of the additional relief?
A. IOM has been providing assistance to Rohingya refugees in Cox’s Bazar, in partnership with the government, UN agencies, international and local NGOs, since September 2013. Now more international and local agencies are coming in to work with us in a well-coordinated effort to help an estimated 1.2 million people – including nearly 900,000 refugees and 300,000 people living in host communities already living since 1992.
But there are still gaps in the response and more resources are needed to ensure adequate, lifesaving assistance for everyone who needs it. Even now, three months after the start of the crisis, hundreds more people are still coming across the border from Myanmar every day. The Joint Response Plan, launched by the UN and partners in September, appealed for USD 434 million to support 1.2 million people through February 2018. Only USD 149.1 million has been received so far, of which IOM has received USD 52 million.
Q. The need [relief] assessment is taking place almost on a daily basis as the influx continues with more Rohingyas arriving in the camps for safety. It appears that the refugees would need to stay in Bangladesh for quite a while before a diplomatic solution is reached for their safe return. Having said this, a sustainable approach is needed on the ground. How do you or the international community, including the UN, plan to pursue both the governments [Bangladesh & Myanmar] to come to terms and find a peaceful return and settlement?
A. Any durable solution must be a political one agreed between Bangladesh and Myanmar and supported by the international community. We all need to work to create the conditions that will allow the refugees to eventually return voluntarily to Myanmar in safety and dignity. The agreement on return signed by the two countries last week is an important first step. But this is going to take time. As the UN Secretary-General has highlighted, UN agencies need to first resume their humanitarian work in Rakhine State, to promote reconciliation between the communities, and to help the government of Myanmar to implement the recommendations of the Rakhine Advisory Commission – the agreed roadmap to peaceful co-existence.
Q. During your visit you met with the Prime Minister of Bangladesh Sheikh Hasina who was quoted as saying, “They [Rohingya] have to go back to their homeland, create international pressure on Myanmar so that they take steps to bring their citizens back.” We just had the UN General Assembly expressing concern for the Rohingya refugees while many heads of government have already sent messages to Myanmar to take back their citizens. The Bangladesh PM and the world leaders are expressing concerns in the same tone. What could be the role of IOM in finding a lasting solution and how?
A. The Prime Minister is correct in saying that there has to be a political solution supported by the international community. Much of this solution lies with Myanmar. IOM, as the UN Migration Agency, is a humanitarian agency and as such does not have the political weight of the UN Secretary General or the UN Security Council. But we can support the Secretary-General in advocating for dialogue between the parties in the hope that it will eventually allow the Rohingya to leave the terrible conditions in which they are living in Cox’s Bazar and return home safely to resume their lives.
Q. Do you have plans to visit Myanmar and meet the leaders there? If yes, what are you hoping to discuss and also see on the ground in Rakhine state where the Rohingyas are coming from?
A. I have no plans to visit Myanmar this year, but I look forward to returning next year to reaffirm IOM’s commitment to promoting peace and stability in Rakhine State, and, of course, to review the many other excellent projects that we implement in the rest of the country.
Q. A Critical Pledging Conference was held in Geneva on October 23, 2017 organized by OCHA, IOM and UNHCR and co-hosted by the European Union and Kuwait. Apart from pledges for international funds, what was the main message at the conference to the Rohingya crisis?
A. The conference was organized to provide governments from around the world an opportunity to show their solidarity and share the financial burden and responsibility for the Rohingya refugees. Over USD 344 million was pledged to urgently ramp up the delivery of critical humanitarian assistance. But countries represented at the conference also stressed that the international community must work together to help to bring about a political resolution of the Rohingya issue.