Money Talks at One Planet Summit in Paris 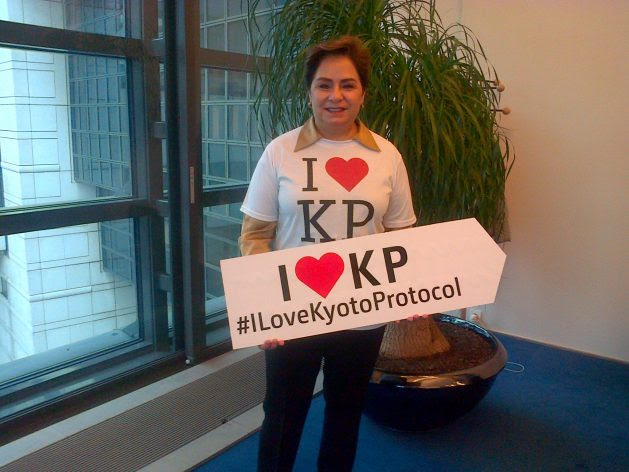 Patricia Espinosa, executive secretary of the United Nations Framework Convention on Climate Change, at the One Planet Summit in Paris. Credit: AM
PARIS, Dec 14 2017 (IPS) - As funding to combat climate change has lagged behind lofty words, the One Planet Summit in France this week invited governments and business leaders to put money on the table.
The result was a significant number of international pledges – both for investment in green energy and divestment from fossil fuels – as various sectors responded to the call from French President Emmanuel Macron for urgent action.
Some of the drive at the summit came from small island states, which have been battered by recent hurricanes and other disasters.
“We’re not going fast enough,” Macron said at the Dec. 12 summit, which he co-convened with the United Nations and the World Bank. “Some countries present will see their territories disappear. We all have to move forward… The time is now.”
French multinational insurance company AXA announced that it plans to have 12 billion euros in green investments by 2020 and that it would divest 2.4 billion euros from certain coal-company activities.
Meanwhile the World Bank Group (WBG) highlighted its funding of projects in India for street lighting; in West Africa to tackle “coastal erosion, flooding and climate change adaptation”; in Indonesia regarding geothermal-power development; and with the Global Covenant of Mayors in a new “Cities Resilience Programme” (CRP).
“Over the next three years, the CRP will leverage $4.5 billion in World Bank loans to catalyze billions in public and private capital for technical assistance, project co-financing and credit enhancement,” said World Bank Group President Jim Yong Kim.
He said that the programme would essentially “act as an investment banker for cities to structure programs to address their vulnerabilities to climate change”.
Kim also announced that the World Bank would not be financing upstream oil and gas after 2019, but that in “exceptional circumstances”, consideration would be given to such financing in the “poorest countries” where there is a clear benefit in terms of “energy access for the poor”.

The bank said it was on track to meet its target of 28 percent of its lending going to climate action by 2020.
With these and other announcements, the One Planet Summit, held two years after the signing of the landmark Paris Agreement, aimed to add momentum to the push for adequate financing of climate adaptation and mitigation, said some observers, while others termed it a public-relations exercise.
The summit brought together heads of state, local government representatives, non-governmental organizations – and schoolchildren. Journalists were out in force, alongside United Nations delegations, at the Seine Musicale venue, an imposing new arts centre on an island in the river Seine, just outside Paris.
Government leaders arrived by boat with UN Secretary-General António Guterres, Macron and Kim, the co-convenors, for a packed afternoon of panel discussions and speeches, following morning events.
“Technological progress has already revealed the falsehood that responding to climate change is bad for the economy,” said Guterres. “Finance could be, should be and will be a decisive factor.”
Some of the drive at the summit came from small island states, which have been battered by recent hurricanes and other disasters.
Caribbean representatives announced the launch of a 8-billion-dollar investment plan to create the world’s first “climate-smart zone”. The bodies involved include the Inter-American Development Bank, the World Bank, the Caribbean Development Bank and private groups, forming a “Caribbean Climate-Smart Coalition”.
The goal is to find a way “to break through the systemic obstacles that stop finance flowing to climate-smart investments”, the Caribbean Development Bank said.
Juvenel Moȉse, Haiti’s president and a participant at the summit, spoke of the vulnerability of the region, emphasizing that all the islands are suffering from the impacts of climate change. He said that Haiti was in a “very fragile zone”.
American actor Sean Penn, also present, said he had got involved in helping Haiti to rebuild after the 2010 earthquake that devastated the country, and he said more financing was needed.
“I call on all those gathered to stand with Haiti,” he urged.
Meanwhile, Canada and the World Bank Group said they would support small island developing states to expand their renewable-energy infrastructure to achieve greater access to energy and to decrease pollution.
In side events around the summit, groups such as the International Development Finance Club (which groups 23 international, national and regional development banks from across the world), highlighted their “green financial flows”.
The group said that in 2016, IDFC members made new commitments representing 173 billion dollars in finance, an increase of 30 billion from 2015.
The eve of the summit, Dec. 11, was titled Climate Finance Day, and it was also the 20th anniversary of the Kyoto Protocol. Patricia Espinosa, the Executive Secretary of UN Climate Change (UNFCCC), told journalists that the long years of negotiations had provided a framework in which all sectors of society could take action, as governments “cannot do it alone”.
She said there was a growing sense of urgency, especially after recent extreme weather events that had seen some communities “losing everything they have built throughout their lives”. More support was needed for adaptation, she and other officials noted.
At the summit, the Agence Française de Développement – an IDFC member — signed accords with Mauritius, Niger, Tunisia and the Comoros – as part of the agency’s Adapt’Action Facility.
With financing of 30 million euros over four years, Adapt’Action seeks to “accompany 15 developing countries that are particularly vulnerable to climate change impacts, in the implementation of the Paris Agreement regarding adaptation,” the agency stated.
An official from Niger spoke compellingly of problems that included desertification. The country has been cited as an example of France not doing enough for its former colonies, and political analysts question whether that will change under Macron.
The European Union meanwhile said that its External Investment Plan (EIP) is set to mobilise some 44 billion euros to “partner countries in Africa and the EU Neighbourhood” by 2020.
Among its goals, the EIP aims to “contribute to the UN’s sustainable development goals while tackling some of the root causes of migration,” according to the EU.
Regarding Asia and the Pacific, officials at the summit said action by countries in the region were “encouraging”. Heads of state included the prime ministers of Bangladesh and Fiji, who spoke of their climate initiatives. Fiji’s Prime Minister Frank Bainimarama said the country was among the first emerging states to offer a green bond.
The international nature of the summit made the U.S. absence even more noticeable. As U.S. President Donald Trump had announced earlier this year that the country would withdraw from the Paris Agreement, he was not invited, French officials said.
Other American climate figures were present, however, such as businessman and former New York Mayor Michael Bloomberg, former California governor and actor Arnold Schwarzenegger, Microsoft founder Bill Gates and former Secretary of State John Kerry.
Bloomberg said that around the world, businesses were taking “responsible” action because investors want to put their money in environmentally friendly companies.
Still, for some NGOs, not enough is being done, and the summit was more of what they had heard before.
“If governments and business are sincere in their commitment to the goals of the Paris Agreement, they would cease their financing of dirty and harmful energy projects around the world and would instead accept their responsibility for providing public finance to address climate change instead of letting business dictate the agenda,” said Meena Raman of Third World Network.