Migrants in Italy: “Shame Is Keeping Us Here” 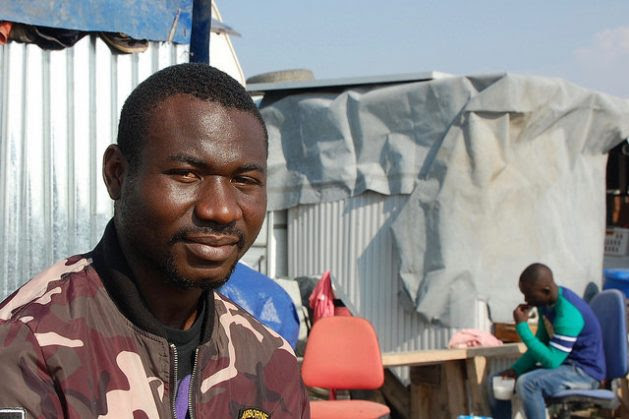 Bamba Drissa from Ivory Coast was one of the 61,532 migrants who crossed the Mediterranean in January 2016. Credit: Daan Bauwens/IPS
RIGNANO GARGANICO, Italy, Dec 12 2017 (IPS) - Despite deplorable living conditions, loneliness and unemployment, many African migrants in Italy choose to stay – even when they have the means to return.
“Shame is keeping us here,” says one young man named Bamba Drissa. “We cannot go home empty-handed.”
“I had no idea or no preconception of what Europe would be like. Work and sending money home, that was all.” --Bismark Asoma
Drissa, who hails from the Ivory Coast, arrived in Europe at the height of the so-called European migrant crisis. He was one of the 61,532 migrants who crossed the Mediterranean in January 2016. That same month, 370 died during an attempt to reach Europe. With a total of 4,713 fatalities, the Libyan corridor would become the deadliest crossing in the world and 2016 the deadliest year at sea.
Trailer on the east side
After a year and a half of traveling around Italy, Bamba Drissa ended up in the ‘Granghetto’ of Rignano Garganico, an illegal settlement of several hundred mostly West Africans without documents. The camp consists of tents and barracks and is located in the middle of the Southern Italian Capitanata plane, only accessible after eight kilometers on dilapidated, potholed streets.
The barracks now only cover a fraction of the original surface of the illegal settlement. On March 1 of this year, police and army started a mass evacuation of the site. It led to a fire that left the bulk of the camp in ashes and killed two Malians in their thirties. The evacuation had been ordered by the anti-Mafia Brigade in Bari due to reported criminal infiltration in the camp. Despite the police action, the brothel, operated by victims of Nigerian smuggling, today is still there.
Residents whose campers or barracks were burnt in the fire bought tents. The tents are still there, on the western side of the camp, protected from the strong wind on the Capitanata plane by the remaining barracks.
When he arrived here six months ago, Bamba Drissa still had enough money to purchase a moldy caravan on the east side of the camp. A month ago he was making money working on Italian farms. Now the harvest is over, the temperature on the plain drops day by day, and the fields where the barracks are built have turned into a sea of mud.
Returning empty-handed
“Life here is much harder than where I come from,” he says. “I have a lot of regrets of coming here.” But returning, the young Ivorian adds, is impossible. “I made my choice to come here. Others chose to stay and build their lives there. I cannot return home empty-handed, this was my choice and now I have to make it happen.”
“It is shame that is keeping me here,” he concludes. “I cannot disappoint my family. They are the reason why we are here. We are here to help them confront their problems. Before we succeed in doing that, we can’t go back.”
Bismark Asoma, 20, from Ghana has been on European soil for three years. He is constantly looking for work and lives in an abandoned farm with a dozen other West Africans in the area around the village of Cerignola, about an hour’s drive south from Rignano Garganico.
The Ghanaian tells a similar story: his father died when he was five. Because his mother struggled to take care of him, his five-year-old brother and 10-year-old sister, he chose to travel to Europe to help her.
“Working and sending money home was the only thing I thought about before leaving,” he says. “I had no idea or no preconception of what Europe would be like. Work and sending money home, that was all.” 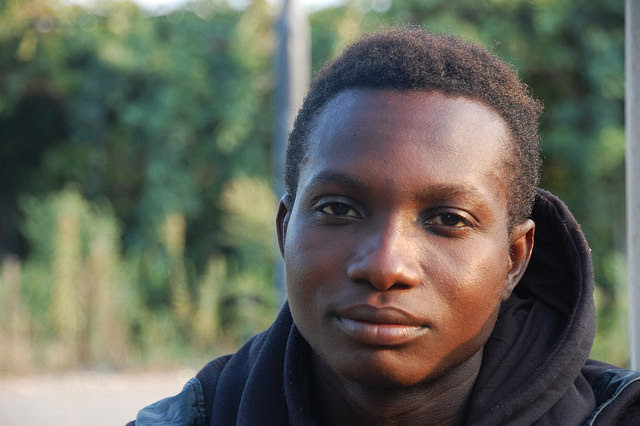 Bismark Asoma, 20, migrated from Ghana to Italy. He lives in an abandoned farm with a dozen other West Africans. Credit: Daan Bauwens/IPS
Remittances
The scale and importance of remittances for the African continent can’t be underestimated. The 2017 Economic Outlook Report of the African Development Bank states that remittances are a ‘major and stable source of external finance for Africa.’ In Western African countries like Liberia and Gambia, money transfers even account for twenty percent of GDP. From 2000 to 2016, remittances grew from 11 billion dollars to 64.6 billion.
While being less volatile than development aid and foreign direct investment the report states, migrant remittance flows also have the advantage of ‘increasing inversely with the economic situation of recipients.’ In other words: migrants are likely to send more money when difficult situations arise in their country of origin.
A son in Europe
Not only in Brong-Ahafo, the region where Bismark Asoma comes from, but in many other West African countries and regions, the prospect of remittances has made the fact of having a son in Europe a matter of prestige.

“The money sent from Europe to Africa improves the economic situation of the family and substantially increases their status in the community,” says Senegalese migration researcher Linguere Mbaye, economic consultant for the African Development Bank Group and research affiliate at IZA, the Institute of Labor Economics in Bonn*.
The Ghanaian Ministry of Migration confirms the logic mentioned by Mbaye and even points out that in some cases, families who do not have children in Europe are looked down upon.
From rural to urban
Though a matter of prestige in African communities, the majority of migrants still leave home out of poverty. A study conducted by the International Organization for Migration (IOM) in Libya last year showed that 80 percent of migrants left home because of economic hardship. Seven percent left because of a lack of basic services such as education or health care in their home country, and only five percent fled violent conflicts.
An analysis of interviews with migrants who had just arrived at Lampedusa that was published earlier this year by the World Food Program (WFP) confirmed these findings. When speaking to West Africans, the WFP noted that they mainly left home because of a lack of job opportunities. Young men interviewed by the WFP told similar stories to those of Bamba Drissa or Bismark Asoma: they were sent out, “leaving their family with the promise of remittances and hopes of a future reunion.”
The path most migrants follow from the moment of departure is summarized as follows: they “firstly moved within their own countries, mostly from rural areas to bigger urban areas or the capital city. In general, they moved one or two times before migrating across the border.”
According to the report, the search for stable employment leads them increasingly further from home. “On the way, they would locally collect information about transiting routes and following steps. The journey continued in this incremental way, following a general path that eventually brought them towards Europe.”
Three factors
Of course there is a subgroup that wants to make the trip to Europe immediately. According to migration researcher Linguere Mbaye, this migration is triggered by three separate factors: “First, the perception that you cannot achieve anything in your own country. You see with your own eyes how much money is sent home by cousins ​​or friends who do make it, while you keep struggling to get a job.
“Secondly, there is a biased perception of salaries in Europe,” says the researcher. “My research shows that the expectations are much higher than the actual wages in for instance France or Spain.”
Thirdly, there is the effect of networks and family members abroad, “who can give all information about where to go and how to fund migration.”
Poverty reduction is not the solution
Contrary to what intuition suggests, relieving poverty will not necessarily lead to a decline in migration. “On the contrary,” says Mbaye. “Research shows that people who are richer have more aspirations and more resources at their disposal to start the journey.”
“Reducing poverty is of course an aim in itself,” she adds, “but there are other factors to consider if we want to decrease illegal migration. Moving away is sometimes seen as the only way to be successful in life. So the only way to help reduce migration pressure is by making it one of the many options in life. We must create a situation in which a person can choose either to migrate safely or invest in a productive activity at home.’
Linguere Mbaye underlines that in this discussion, migration should not be considered “a bad thing it itself. And for many people it is a way to deal with adverse shocks. It is thus important to find ways to make migration safe and regular.”
*All opinions expressed here are hers and do not represent those of the African Development Bank.