A Responsibility to Prevent Genocide 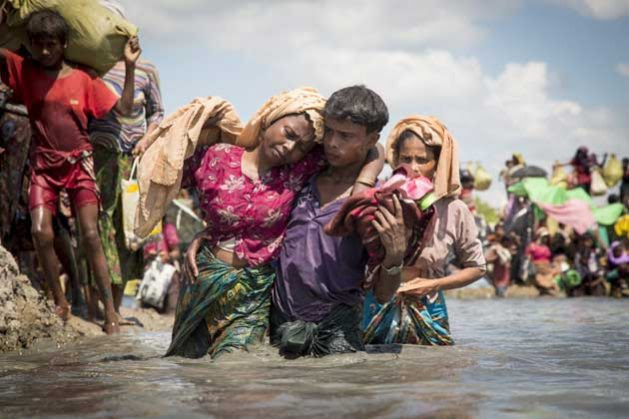 Thousands of new Rohingya refugee arrivals cross the border near Anzuman Para village, Palong Khali, Bangladesh. Credit: UNHCR/Roger Arnold
UNITED NATIONS, Dec 12 2017 (IPS) - Almost 70 years since the Genocide Convention was adopted, the international community still faces a continued and growing risk of genocide.
On the International Day of Commemoration and Dignity of the Victims of the Crime of Genocide, the UN launched an appeal for member states to ratify the 1948 convention by the end of 2018.
“Genocide does not happen by accident; it is deliberate, with warning signs and precursors,” said Secretary-General Antonio Guterres.
“Often it is the culmination of years of exclusion, denial of human rights and other wrongs. Since genocide can take place in times of war and in times of peace, we must be ever-vigilant,” he continued.
The Secretary-General’s Special Advisor on the Prevention of Genocide Adama Dieng echoed similar sentiments, stating: “It is our inaction, our ineffectiveness in addressing the warning signs, that allows it to become a reality. A reality where people are dehumanized and persecuted for who they are, or who they represent. A reality of great suffering, cruelty, and of inhumane acts that have at the basis unacceptable motivations.”
The Convention defines genocide as “acts committed with intent to destroy, in whole or in part, a national, ethnical, racial, or religious group.” This includes not only killing members of the group, but also causing serious bodily or mental harm and imposing measures intended to prevent births within the group.
Despite the comprehensive definition of genocide in the Convention, genocide has recurred multiple times, Guterres said.
“We are still reacting rather than preventing, and acting only when it is often too late. We must do more to respond early and keep violence from escalating,” he said.
One such case may be Myanmar.
After a year of investigation, the organization Fortify Rights and the United States Holocaust Memorial Museum said that there is “mounting” evidence that points to a genocide against Rohingya Muslims in Myanmar with Burmese Army soldiers, police, and civilians as the major perpetrators.
“The Rohingya have suffered attacks and systematic violations for decades, and the international community must not fail them now when their very existence in Myanmar is threatened,” said Cameron Hudson from the U.S. Holocaust Memorial Museum.
“Without urgent action, there’s a high risk of more mass atrocities,” he continued.
More than half of Myanmar’s one million Rohingya have fled the country since violence reignited in August.
“They tried to kill us all,” 25-year-old Mohammed Rafiq from Maungdaw Township told researchers when recalling how soldiers gathered villagers and opened fire on them on 30 August. It has been the largest and fastest flow of destitute people across a border since the 1994 Rwandan Genocide, the International Organization for Migration (IOM) said.
“There was nothing left. People were shot in the chest, stomach, legs, face, head, everywhere.”
Eyewitness testimony revealed that Rohingya civilians were burned alive, women and girls raped, and men and boys arrested en masse.
“These crimes thrive on impunity and inaction…condemnations aren’t enough,” said Chief Executive Officer of Fortify Rights Matthew Smith.
On the other side of the border, refugees find themselves living in overcrowded camps with limited access to food, water, and shelter. They are in need of treatment for not only their physical injuries, but also the mental and emotional scars from their traumatic experiences.
IOM spoke to some of the survivor who made the treacherous journey by boat to Bangladesh including 8-year-old Arafat. His entire family including his parents, two brothers, and a sister drowned when the fishing boat carrying them capsized in stormy weather.
“Where will I go now,” he cried, transfixed with shock.
The government’s strict restrictions on Rohingya’s daily lives also point to signs of genocide.
In 2013, authorities placed a two-child limit on Rohingya couples in two predominantly Muslim townships in Rakhine State.
Others have come forward to claim that the crisis in Myanmar may constitute genocide such as UN High Commissioner for Human Rights Zeid Ra’ad al-Hussein and the British parliament’s Foreign Affairs Committee.
“Considering Rohingyas’ self-identify as a distinct ethnic group with their own language and culture – and [that they] are also deemed by the perpetrators themselves as belonging to a different ethnic, national, racial or religious group – given all of this, can anyone rule out that elements of genocide may be present?” al-Hussein asked.
Though the UN Human Rights Council recently condemned the systematic and gross violations of human rights in Myanmar, the Security Council has failed to act on the crisis.
As the UN appeals for the remaining 45 member states to ratify the Genocide Convention, what about nations like Myanmar who are already party to the document?
The Convention requires all states to take action to prevent and punish genocide. Not only Myanmar, but the entire international community has failed to protect Rohingya civilians from mass atrocities.
“The world has reacted with horror to the images of their flight, and the stories of murder, rape and arson brought from their still smoldering villages in North Rakhine State. But this horror will have to be matched by action on the part of the international community, if we are to avert a humanitarian disaster on both sides of the border,” said IOM’s Director-General William Lacy Swing.
Perhaps the international community may need to consider additional mechanisms to address and prevent genocide, making sure ‘never again’ really means never again.
To date, a total of 149 member states have ratified the Convention on the Prevention and Punishment of Genocide.