In wake of Catalonia attacks, installation of barriers has already begun at tourist sites 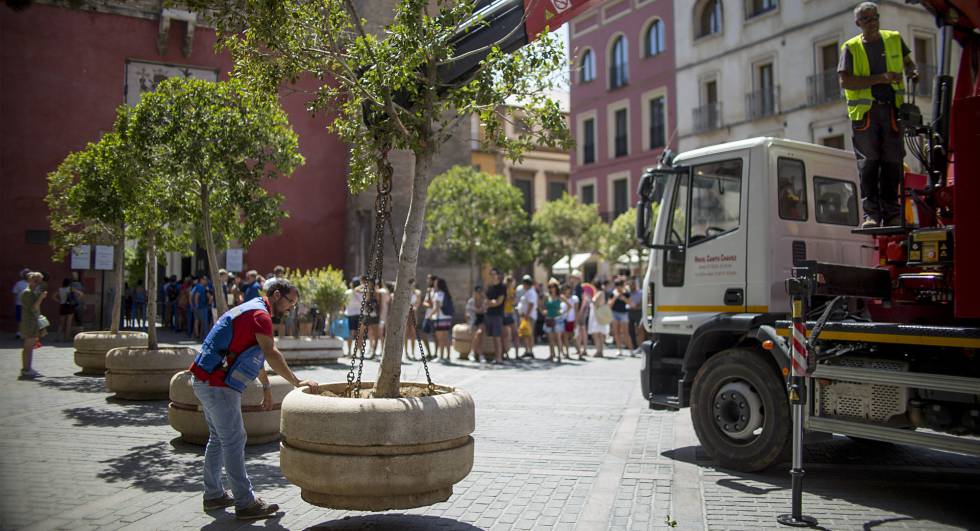 Large planters are placed in the tourist areas of Seville. PACO PUENTES


Some of the largest cities in Spain have begun taking preventive security measures to protect their main pedestrian walkways by installing bollards, planters and concrete blocks, to avoid attacks like those in Catalonia last week. Although the Ministry of the Interior did not detail its recommendations so as to “not give clues to terrorists,” it has agreed with law enforcement agencies to “increase security devices in highly attended places or events.”
Large cities are taking similar measures to those taken at the end of 2016 following the attack in Berlinwhen a truck drove into a crowd at a Christmas market. Local authorities followed the recommendations and installed bollards and increased surveillance in areas where crowds were expected over the holiday season. Now, following the attacks in Barcelona and Cambrils, once again they are beefing up security measures.
Barcelona. The city’s security council met with Mayor Ada Colau,  regional Minister of the Interior Joaquim Forn and the central government delegate for Catalonia Enric Millo, deciding to increase the number of officers on the streets at airports, train stations and other busy areas of the city. It was also decided to install obstacles to prevent pedestrian and vehicle collisions. Police will also be intensifying surveillance at major events, demonstrations, and concerts by expanding the security perimeter and requiring people entering to identify themselves. The city council will continue to study “the restriction of roads to pedestrians, the installation of fixed obstacles or specific actions.”
Madrid. Officials in Spain’s capital city have followed instructions from the interior ministry and implemented planters and physical barriers in main streets and plazas that are currently unprotected, such as the central Puerta del Sol, Preciados street, and Carmen street. “We have done everything the police has told us and we will maintain these measures,” said a City Hall official. The measures were adopted the day after the attacks in Catalonia.
Valencia. Following the attacks, the city has installed obstacles to prevent vehicles from entering pedestrian spaces. Until these are fully installed, police vehicles will close off vulnerable areas of the city. The security measures must also take into account access for emergency vehicles, as well as resident access to garages, shops, and hotels.
Seville. The largest city in the southern region of Andalusia will begin to install planters along the Real Alcázar, a major monument that attracts 1.6 million visitors a year. This is just the first step for City Hall and the central government delegation, which have set up a committee to plan the lay out of further bollards. The redesigned security plan involves both permanent and temporary obstacles, which can be used for events, along with an increased police presence and security cameras.
Zaragoza. City Hall is preparing a study on how to improve security measures for the capital city of the Aragon region in northeastern Spain. The plan will include installing bollards in the main points of interest.
Bilbao. The Basque city has decided that fixed obstacles are not the right solution for the city’s safety needs. A study concluded that the use of barriers would “further restrict roads” used by the public bus system, cargo vans, and residents. Instead, City Hall will establish local police checks and use police vehicles to regulate traffic and protect pedestrians.
Santiago de Compostela. Increased security obstacles are already a reality for the city in northwestern Spain that is the final destination of the Saint James Way pilgrimage route. Bollards have been placed in the Obradoira Plaza and in front of the main cathedral. These are a temporary measure to be replaced once the city finds a “more modern and aesthetically pleasing bollard.” This plan was in the works before the attacks in Catalonia, but, since then, “sensitive points” in the city have been identified for additional protection.