Abdelbaki Es Satty spent time in Vilvoorde, a center for Jihadism in Europe 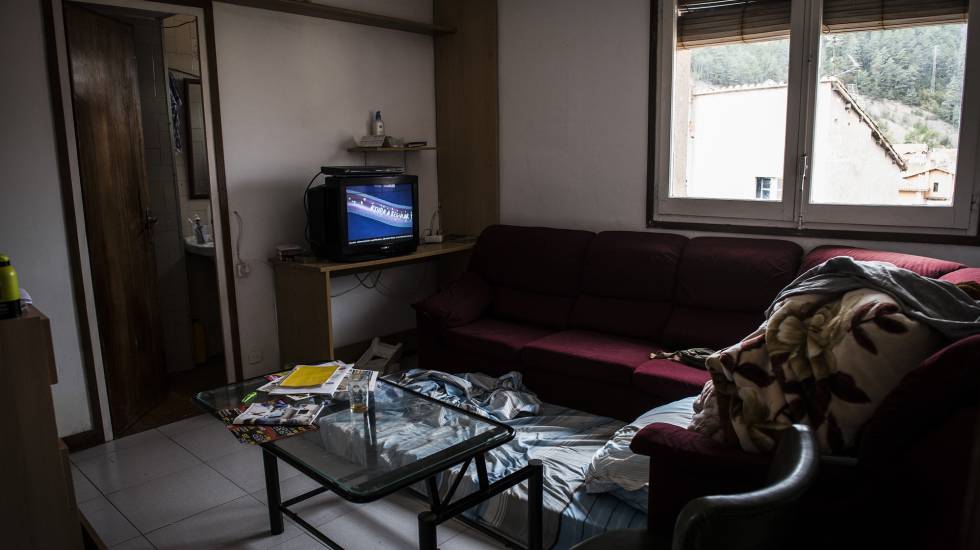 
The Belgian authorities asked the Spanish police in 2016 whether Abdelbaki Es Satty, the Moroccan imam accused of masterminding last week’s terrorist attacks in Barcelona and Cambrils, had links to Islamic terrorism, based on suspicions about him during his stay in Vilvoorde at that time, according to the mayor of the Belgian town.
In recent years, Vilvoorde, Belgium has become a center for Jihadism in Europe
Hans Bonte has told EL PAÍS that the Spanish authorities replied on March 8, 2016, saying that they had no indications that Es Satty, who is believed to have died in an explosion at a house on August 16 being used to make bombs in the run up to the attacks last week, was involved in radical Islam.
Neither the Spanish or Belgian police have confirmed the alleged request, saying only that Es Satty’s background was not “suspicious” and that as a rule they do not “share sensitive intelligence.”
In recent years, Vilvoorde has become a center for Jihadism in Europe. Between 2011 and 2014, at least 28 volunteers from the town of 40,000 on the outskirts of Brussels, went to fight in Syria. “We had serious problems with radicalism,” says the mayor. “But since 2014 we have had the situation under control and set in motion anti-radicalization mechanisms that have proved effective,” says Bonte.
Es Satty went to Vilvoorde in January last year, where his behavior soon aroused suspicions among the area’s Muslim community. The head of a mosque in the neighboring town of Diegem warned the authorities. “He turned up unannounced and said he wanted to be an imam because he had no future in Spain,” says Bonte.

Radicalization in jail is a well-known phenomenon
JORDI MORERAS, AN EXPERT IN ISLAMISM

“The local police and those leading the anti-radicalization programs looked for all the information they could and contacted the intelligence services,” adds the mayor. “The local police contacted the Belgian federal police, who in turn were in touch with the security forces in Barcelona,” says Bonte, without detailing whether this was the Mossos d’Esquadra regional police force of Catalonia, Spain’s national police force or the Civil Guard.
Counter-terrorism sources say “there is no report” linking Es Satty with Islamic terrorism. In 2006, when a cell was dismantled in the small town of Vilanova I la Geltrú near Barcelona that was intending to send volunteers to fight in Iraq, one of those arrested was a cousin of Es Satty. “But we found no link between him and the criminal activities of the group,” say the sources.
But in recent years, Es Satty had undergone personal changes that counter-terrorism experts say are indicative of Islamic radicalization: after a four-year spell in prison for smuggling hashish, he became increasingly religious, abandoning his drug dealing activities. His alleged return to Vilanova i la Geltrú, where he had been in touch with radicals eight years earlier, was also significant, say the same sources.
“Radicalization in jail is a well-known phenomenon,” says Jordi Moreras, an expert in Islamism at the Rovira I Virgili University in Tarragona.
But Youseff Aghbalou, the head of an Islamic cultural association in Vilanova said on Tuesday that Es Satty did not return to the town in 2014 after leaving jail.
Either way, little is known of Es Satty’s movements between 2014 and his arrival in Vilvoorde in January 2016, where he is believed to have stayed for three months.
An expert in Islam based in Catalonia who asked not to be named because he holds a political post, says that Es Satty’s move to Ripoll, where he recruited and indoctrinated the young men who took part in the attacks last week, should have been flagged up by the authorities. “Not just because he had been in jail and undergone a change, but because he had traveled to one of the centers of Jihadism in Europe and came back as an imam.”

JORDI MORERAS
In Ripoll, Es Satty set up his own mosque. “Each new mosque is a world to be studied. We have to know who runs them, who set them up, who attends them, what is said there…” say counter-terrorism sources.
The Catalan regional police were in regular contact with Ripoll’s Muslim community, but nothing about Es Satty’s behavior caught the attention of officers. Representatives of the Muslim community say they should have been told that Es Satty had served time for drug smuggling and had only been released three years ago, as this would have made him ineligible to be an imam.
Sources in the Catalan police admit that Ripoll, a small town in the foothills of the Pyrenees with a sizeable Muslim population, was not on its radar as somewhere at risk of Islamic radicalization. “They are everywhere, but there are certain hot zones where intensive investigative work has been carried out, while others are considered cooler.”
All the sources consulted by EL PAÍS have highlighted the young age of the 12 men involved in the terror attacks, as well as the fact that none of them had been in trouble with the law. “What we often find is that before radicalization there is a prior process of petty crime and a spell in prison that can undermine their hopes for the future, meaning that they are more likely to make the leap that can lead them into terrorism,” explains Moreras. “But in Ripoll, almost all the members of the group were too young and hadn’t been through that stage. It’s as though they had jumped a stage. And that is very unusual and new,” he adds.
Sources in the Catalan police highlight the “intelligence” of Es Satty. “He was careful not to say anything radical during his sermons. Instead, he seems to have used them to monitor his parishioners and to select those he could influence, particularly the youngest. He would then exercise this influence away from the mosque, behind the backs of community leaders.”