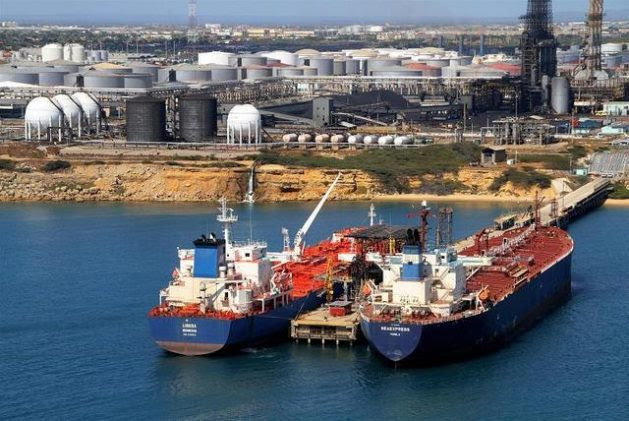 The Paraguaná oil refinery complex in northwestern Venezuela, one of the world’s largest, can process a million barrels a day, and is working at just a third of its installed capacity. Credit: Pdvsa
CARACAS, Dec 19 2017 (IPS) - Corruption in the Venezuelan state oil industry, denounced by the government itself, and with former ministers and senior managers behind bars, is the latest evidence that, in the country with the largest oil reserves on the planet, the industry on which the economy depends is falling apart.
There was a drop “in the production of crude oil, of a million barrels per day,” economist Luis Oliveros, who teaches at the Metropolitan University, told IPS. In December 2013 output stood at 2,894,000 barrels per day compared to 1,837,000 in November 2017, according to the Organisation of the Petroleum Exporting Countries (OPEC).
By 2018 production could drop another 250,000 barrels per day at the current rate, and Venezuela, co-founder of OPEC in 1960 when it was the world’s largest crude oil exporter, is becoming an almost irrelevant player in the global market, Oliveros said.
This despite the fact that it has the largest known deposit of liquid fossil fuels, the 55,000- sq-km southeastern Orinoco oil belt, with an estimated 1.4 trillion barrels of crude, mainly extra-heavy, including proven reserves of 270 billion barrels, according to Venezuelan estimates.
Oil is virtually Venezuela’s only export product, the source of 95 percent of foreign exchange earnings, and by the middle of this decade it represented more than 20 percent of GDP. Most of the business is in the hands of the state-owned Petroleos de Venezuela (PDVSA), which has a few partnerships with transnational corporations.
President Nicolás Maduro started a purge on Nov. 28 within PDVSA, in the midst of the hail of corruption allegations and investigations, and asked the new management, led by a general new to the industry, Manuel Quevedo, to make an effort to raise production by one million barrels per day.
The immediate target was to meet the quota assigned by OPEC for 2017-2018, of 1,970,000 barrels per day, said presidential adviser Alí Rodríguez.
“Merely to sustain the current production of 1.85 million barrels per day – let alone increase it – we need to inject between four to five billion dollars into the industry, and the evidence is that this money is not there,” said Alberto Cisneros, CEO of the oil consulting firm Global Business Consultants.
With the economy in shambles, a four-digit inflation rate, different simultaneous exchange-rate systems for a currency that depreciates daily, shortages of food, medicines and essential supplies, and a foreign debt of more than 100 billion dollars, Venezuela does not have the resources that the industry needs, he told IPS.
Against this backdrop, the oil business “also suffers from management problems since PDVSA in 2003, after a strike against the government, dismissed 18,000 employees, half of its workforce,” former deputy energy minister Víctor Poleo (1999-2002) told IPS.
And corruption was dramatically exposed this December, when the Attorney General’s Office sent 67 PDVSA executives and managers to prison for crimes ranging from falsification of production figures to embezzlement and undermining the country’s sovereignty,.
Among these were two former oil ministers of President Nicolás Maduro, in power since 2013, Eulogio del Pino and Nelson Martínez, who were also presidents of PDVSA and its U.S. subsidiary, Citgo, which they allegedly damaged when re-negotiating debts.
Moreover, the Public Prosecutor´s Office is investigating Rafael Ramírez, a former oil minister and president of PDVSA between 2002 and 2014, and until last November Venezuelan ambassador to the United Nations, for his possible involvement in money laundering operations through the Banca Privada d’Andorra bank. 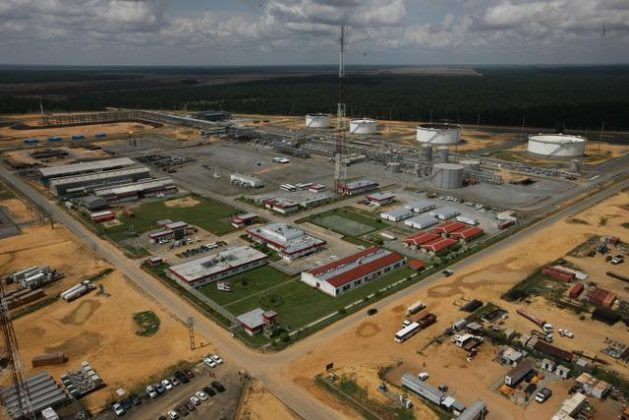 Petromonagas, a joint venture between state oil company PDVSA and Russia’s Rosneft, extracts crude oil from the Orinoco Oil Belt, in southeastern Venezuela, considered the largest oil deposit on the planet. Credit: Pdvsa
According to the Spanish newspaper El País, which claims access to reports on which Andorran Judge Canòlic Mingorance is working, people close to Ramírez received at least two billion euros (2.36 billion dollars) in illegal commissions between 1999 and 2013.
PDVSA, a company born from the nationalisation of the industry in 1975, and which for years boasted of being one of the top five oil companies in the world, is thus languishing under a cloud of accusations of corruption, incompetence and fraudulent management.
Production “is declining due to a lack of investment and maintenance, starting with the obsolete installations of Lake Maracaibo in the northwest, which produces no more than 450,000 barrels per day,” said Cisneros. Since 1914, more than 13,000 oil wells have been drilled there, and up to the 21st century, the lake basin produced more than one million barrels a day.
The relatively new fields of the east provide the rest of the output, but the figure of 1.3 million barrels per day extracted in the Orinoco Belt, announced by del Pino in the middle of the year, has been questioned by the criminal investigation.
Venezuelan expert Francisco Monaldi, at Rice University in the U.S. state of Texas, pointed out that exports are already below 1.4 million barrels per day (they stood at over 2.5 million at the beginning of the century), and less than 500,000 barrels per day were exported to the United States in November
For a century, the United States was the biggest importer of Venezuelan oil, purchasing 1.5 million barrels per day. And it is still the main source of revenue, as exports to China, which exceed 600,000 barrels per day, are used to pay off debts.
In oil refining, “it is perhaps even worse” according to Cisneros, since the Venezuelan refineries, installed to process 1.3 million barrels per day, “worked a few years ago at 90 or 95 percent of their capacity and now are only working at a third, 30 or 35 percent. We do not even supply our fuel needs,” which in part have to be imported, he pointed out.
To the decrease in the production of gasoline, lubricants and other derivatives are added distribution problems in the 1,650 service stations in this country of almost one million square kilometers, 31 million people and four million vehicles.
One of the problems is the absurdly low price of fuel in the country, the cheapest in the world. One litre costs just one bolívar, which at the official exchange rate is equivalent to about 10 cents, but at the black market rate is equivalent to one-thousandth of a cent: with one dollar you could buy 100,000 litres.
The cost of selling half a million barrels of fuel each day at this low price is a loss of between 12 and 15 billion dollars a year for PDVSA.
In addition, there is a problem of smuggling to Colombia, Brazil and the Caribbean, which Venezuela partially curbs with controls and rationing that cause shortages and huge queues of vehicles at gas stations along the border.
PDVSA has paid back interest in arrears this year for its debt bonds, while a US subsidiary of Chinese company Sinopec -a partner that has contributed more than 50 billion dollars in loans to Caracas – sued the Venezuelan state-owned company before a US court, for 21.5 million dollars over unpaid bills.
The United States imposed sanctions on Venezuela that make it difficult to renegotiate the country’s and PDVSA’s debts.
“Sanctions and default make it more difficult for partners to invest in joint ventures. The Venezuelan oil industry seems to have entered a spiral of death,” said Monaldi.
Cisneros believes that a recovery of the industry “is possible with a different organisational scheme, such as Argentina’s, which has a ‘front company’, Enarsa, and an operator, YPF (51 percent state-owned, 49 percent listed on the stock market).”
To achieve that “there are two possibilities; one is that the current regime reacts with respect to the economy and oil, and another is that there is a political change and the country starts to take advantage of its human, economic and oil resources,” he argued.