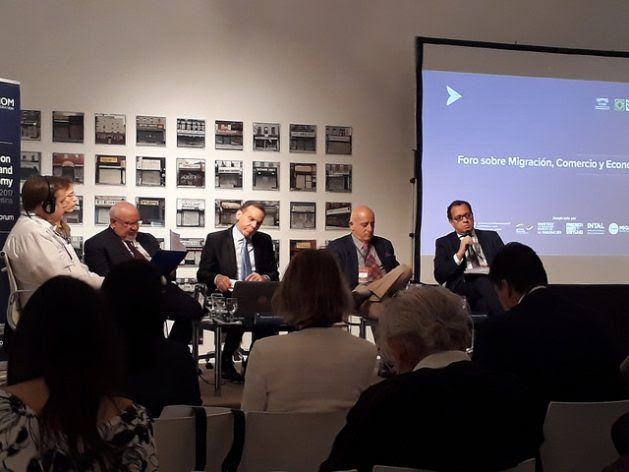 Participants in the first Forum on Migration,Trade and the Global Economy held in the old Immigrants’ Hotel in Buenos Aires, where the Argentine government used to accommodate the thousands of Europeans arriving to the country in the 19th century and the early 20th century, a symbol of the positive reception that migrants once enjoyed. Credit: Daniel Gutman/IPS
BUENOS AIRES, Dec 16 2017 (IPS) - What are the contributions of migrants to trade, to the economy of their countries of destination and origin? This is an angle that is generally ignored in the international debate on the subject, which usually focuses more on issues such as the incidence of foreigners in crime or unemployment.
In order to discuss these and other questions, international experts met in Buenos Aires on on Thursday, Dec. 14, at the first Forum on Migration, Trade and the Global Economy.
Not coincidentally, but to highlight the links between both topics, the event was held a day after the end of the 11th Ministerial Conference of the World Trade Organisation (WTO), also held in the Argentine capital.
“Migration is treated today in the world almost as a police matter. We stress the need to address the issue a different way, analysing the favourable economic outlook, especially in international trade,” said Aníbal Jozami, president of the Foro del Sur Foundation.
"Migration is a complex social and economic phenomenon, so you have to be very sophisticated in how you speak about migration to people. It's very difficult to explain that maybe those people are unemployed today, but in the future they will be bringing positive skills and knowledge to society." -- Marina Manke

This Argentine non-governmental organisation, which promotes diversity, organised the event together with the Geneva-based International Centre for Trade and Sustainable Development and the International Organisation for Migration (IOM).
There are some 244 million migrants in the world today – around three percent of the total population – according to figures provided by Diego Beltrand, the IOM regional director for South America.
The number of migrants grew by an estimated 300 percent over the last 50 years. Different kinds of evidence of their economic contribution, something that is usually ignored, were presented at the forum.
This lack of knowledge about the positive impact of migration is the reason why, Beltrand said, “freedom of trade has been widely recognised around the world, but not freedom of movement for people.”
According to a study presented by the IOM during the forum, migrants contribute nearly 10 percent of the world’s GDP and are especially helpful to their countries of origin at times of economic crisis through remittances, which exceed 15 percent of national GDP in countries such as El Salvador and Honduras.
The IOM also estimates that migrants generate six trillion dollars worldwide. Meanwhile, the remittances they send to their countries of origin reach 15 billion dollars per year, according to Resedijo Onyekachi Wambú, from the African Foundation for Development.
Another prejudice challenged was that most immigrants aspire to very basic jobs. Stefano Breschi, a professor at Bocconi University in Milan, Italy, revealed that in the last two decades, high-skilled migration grew by 130 percent against an increase of just 40 percent for the low-skilled.
Why then do politicians from all destination countries of the world try to win votes by promising more restrictions against foreigners, against all empirical evidence?
For Marina Manke, head of the IOM’s Labour Mobility and Human Development Division, “Migration is a complex social and economic phenomenon, so you have to be very sophisticated in how you speak about migration to people. It’s very difficult to explain that maybe those people are unemployed today, but in the future they will be bringing positive skills and knowledge to society.”
Manke is a Russian woman married to a German man. She emigrated to Germany, which she visits every weekend as she now works in the Swiss city of Geneva.
“My family in Germany see a large number of migrants in Berlin and it worries them. We need to be patient. Maybe there is a negative impact in the short term but over long periods migration is a broadly positive phenomenon,” she told IPS.
The event was held in the old Buenos Aires Immigrants’ Hotel, a building near the port which has been turned into a museum. In the late 19th and early 20th centuries, the Argentine government gave free accommodation there to families who had just arrived after long sea journeys.
Argentina is a country whose founders set their sights on attracting immigrants. The National Constitution, written in 1853, promises equal opportunities “for all men of the world who want to live on Argentine soil.”
Thus, between 1881 and 1914 more than four million foreigners arrived, who represented more than a quarter of the population in 1895, as can be read in the museum. The majority of these immigrants were from Italy, Spain and other European countries.
Today things have changed, and Europe is the destination sought by millions of immigrants as it tries to close its borders.
“The major problem in Europe is that we find that the data is not reflected in the public discourse. If you look for information, you generally find a neutral or positive picture of migration’s role in the labour market and economy,” said Martin Kahanec, professor of public policy at the Central European University in Budapest.
“In the debates related to Brexit in the UK, for instance, the narratives that migrants take our jobs or abuse our welfare were not supported by the data,” the Slovak expert told IPS.
“Although economic arguments are used in the debate, what really drives this debate is fear.”
Europe is the main destination for migrants from Africa, the continent that exports the most people. Every year, between 15 and 20 million young Africans join the labour market and a high proportion cannot find a job and are impelled to leave their country, according to figures provided during the forum, setting out on journeys where death can prevent them from reaching their destination.
South America, on the other hand, received praise for its recent immigration policies.

Since 2009, efforts were made to strengthen the regional integration process with freedom of movement agreements for citizens of Argentina, Bolivia, Brazil, Chile, Colombia, Ecuador, Paraguay and Uruguay.
This made it possible for more than two and a half million citizens from other countries in Latin America to obtain residency permits, according to data from the IOM Regional Office for South America, based in Buenos Aires.
In the case of Argentina, the National Director of Migrations, Horacio García, said that since 2012, more than 1,350,000 residence permits have been granted.
García, however, warned that it is necessary for the State to get involved in the integration of immigrants into the labour market, a topic that today is being neglected.
“It is necessary to identify those regions of the country where there are job opportunities, so so they can contribute to development, their skills are used and the pressure is taken off urban areas,” he said.
Like other countries in the region, Argentina recently received large numbers of immigrants from Venezuela who are fleeing the economic, political and social crisis in that country.
Argentine sociologist Lelio Mármora, who specialises in migration questions, estimated that in the last year and a half alone, some 40,000 Venezuelans have settled in Argentina.
However, openness towards immigrants is not common in the world. Mármora was one of those who most emphatically condemned the “difference between the freedom that exists for the movement of goods and for the movement of people.”
“Everyone applauded the fall of the Berlin Wall and today we have about 20,000 kilometers of walls and fences that prevent people from passing from one place to another,” he complained.