US Faces Collective Defiance at UN Over Jerusalem 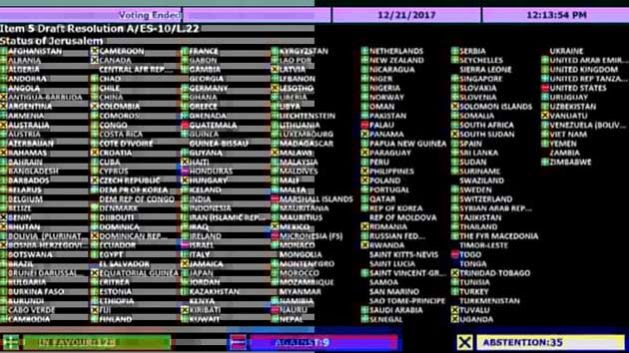 UN voting -- electronic board. Credit: UN Photo
UNITED NATIONS, Dec 22 2017 (IPS) - When the UN General Assembly condemned the United States for its decision to recognize Jerusalem as the capital of Israel, the vote was described as a “collective defiance” of the international community against public threats against the United Nations and its member states by a politically unpredictable and predictably wavering US President.
Turkish Foreign Minister Mevlut Cavusoglu, speaking on behalf of a country that has been a longstanding American ally, declared that Donald Trump’s threat last week to cut off American aid to countries voting for the UN resolution, as an act of “bullying,” and the General Assembly “would not bow to such bullying”.
“It is unethical. The votes and dignity of member states are not for sale– and it was unacceptable for a member state to threaten other member states. A vote in favour of the Palestinian people would place Member States on the right side of history”, he noted.
Stewart Patrick, a senior fellow at the Council of Foreign Relations, was quoted by the New York Times as saying: “I think this was a significantly self-inflicted wound and really unnecessary, clumsy diplomacy on the part of the United States.”
“More than that, I think it symbolizes the self-defeating notion that for the United States, ‘it’s my way or the highway,’” he said.
Regrettably, there is no love lost between Trump and the United Nations, which he once denounced as just another “social club” – a remark made more through sheer ignorance than a well-thought-out diplomatic pronouncement.
Nikki Haley, the US ambassador to the UN, went one step further by not only warning member states but also the United Nations itself. In an implicit threat on US funding for the UN, she said: “We will remember it (the voting against the US), when we are called upon once again to make the world’s largest contribution (22 percent of the regular budget) to the United Nations”.
The final tally on the vote was 128 in favour to 9 against (Guatemala, Honduras, Israel, Marshall Islands, Federated States of Micronesia, Nauru, Palau, Togo, United States), with 35 abstentions.
The non-binding General Assembly resolution, which expressed “deep regret” over recent decisions concerning the status of Jerusalem, also stressed that the future of the Holy City “is a final status issue to be resolved through negotiations in line with relevant UN resolutions” – and, in a stinging rebuke to the US, declared “null and void” any actions intended to alter Jerusalem’s character, status or demographic composition.
Adopted at an emergency special session of the General Assembly on Thursday, the resolution was a devastating attack against Trump’s recent unilateral decision to recognize the historically disputed city of Jerusalem as the capital of Israel and a pledge to relocate the US embassy from its current location in Tel Aviv—the only country to do so.
The 128 member states supporting the resolution included four of the five permanent members of the Security Council: the UK, France, China and Russia. The fifth permanent member is the US.
Last week, speaking on the impending UN vote, Trump blustered he will not tolerate “all of these nations that take our money and then vote against us in the Security Council and at the General Assembly. They take hundreds of millions of dollars and then they vote against us. Well we’re watching those votes.”
But some of his threats, which is rare for a head of state, have proved to be empty. Trump threatened to hold up aid to Pakistan if it did not cooperate more on US counter-terrorism efforts and also warned he will withdraw from the North Atlantic Treaty Organisation (NATO) if it did not increase its joint military spending.
US economic and military aid to American allies such as Afghanistan, Pakistan, Iraq, Egypt and Jordan, run into billions of dollars annually—but all of these countries voted for the resolution.
One of the strongest denunciations came from Ambassador Maleeha Lodhi of Pakistan who told delegates that the unilateral actions of one country were set to undo decades of work by the international community and to defy international law.
She said Pakistan rejected the decision by the United States to recognize Jerusalem as Israel’s capital and relocate its embassy to the Holy City in contravention of several provisions of Security Council and General Assembly resolutions.
“Member States must recommit to thwarting any attempts to violate the inalienable rights of the Palestinian people and the ultimate goal of a two State solution”.
Expressing her support for the Palestinian cause, she said it was a key pillar of Pakistan’s foreign policy, recalling that her country had led and sponsored the Assembly’s first ever resolution on Jerusalem.
“In that regard, Pakistan was proud to join the international community once again in adopting a landmark draft resolution to reject the “revisionist” decision of the United States,” declared Dr Lodhi.
Riad al-Malki, Minister for Foreign Affairs of Palestine, said while the State of Palestine respected the sovereignty of all States, it refused to have that principle used as an excuse to deny Palestinians their rights.
“We stand today united for justice,” he declared, stressing “the veto will not stop us”. The State of Palestine would not accept any justification — security, religious or otherwise — to excuse Israel’s continued occupation, he said. The United Nations was today undergoing an unprecedented test “with Palestine as its headline”.
The General Assembly resolution followed a failed attempt by the 15-member Security Council last week to adopt a similar text reflecting regret about “recent decisions regarding the status of Jerusalem.” But that resolution, despite a vote of 14 to 1, was vetoed by the United States, a permanent member of the Security Council.
Both the General Assembly and the Security Council votes have underlined the increasing isolation of the Trump administration—amongst its Western allies and at the United Nations.
The writer can be contacted at thalifdeen@aol.com