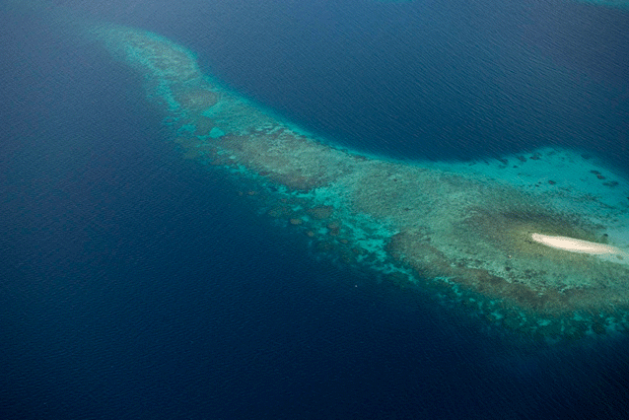 Aerial View of Marovo Lagoon, Solomon Islands. Credit: UN Photo/Eskinder Debebe
UNITED NATIONS, Nov 29 2017 (IPS) - The 1951 UN convention on political refugees– which never foresaw the phenomenon of climate change– permits refugee status only if one “has a well-founded fear of persecution because of his/her race, religion, nationality, membership in a particular social group or political opinion.”
But a proposal for an amendment to that Convention—or an optional protocol — to include a new category of “environmental refugees” has failed to get off the ground.
The threat of sea-level rise — and the possibility of tiny islands, mostly in the Pacific, including Tuvalu, Kiribati, Samoa, Solomon Islands, Nauru, Marshall Islands, Palau, Micronesia and Vanuatu, vanishing from the face of the earth or facing economic calamities because of a projected sea-level rise triggered by climate change — — has raised new fears and new challenges.
Should the threat of environmental catastrophes be legitimate grounds for asylum and refugee status?
Ambassador Anwarul K. Chowdhury, a former UN High Representative and Under-Secretary-General for Least Developed Countries, Land-locked Developing Countries and Small Island Developing States (SIDS), told IPS the rationale for the recognition of the category of “environmental refugees” has been established for quite some time.
“As Under-Secretary-General and High Representative of the United Nations, I had highlighted the case of the most vulnerable countries affected by the degradation of the environment and had advocated for recognition of the resulting refugee situations,” he said.
“These environmental refugees need to be recognized formally as refugees and entitled to be covered by the 1951 U.N. Convention on the Status of Refugees. It is high time for us to do that,” Chowdhury declared.
As has been the case with a number of other international treaties and conventions, an optional protocol to the 1951 refugees convention could be adopted to recognize the environmental refugees, he pointed out.
“
“While climate change affects us all, the risks of displacement are significantly higher in lower-income countries and among people living in poverty. Women, children, indigenous peoples and other vulnerable groups are also disproportionately affected.”

Simon Bradshaw, Climate Change Specialist at Oxfam Australia
The international community owes it to these ill-fated hapless victims of environmental catastrophes whether manifesting as loud emergencies or the silent ones,” Chowdhury said.


“The international community should also be forward-looking and flexible to accommodate the new realities our world faces,” he noted.
Chowdhury also said it is not prudent to remain stuck with the sole category of “political refugees” while the world is watching a mass movement of people across international boundaries for economic reasons, now compounded by environmental causes.
“We expect the UN Secretary-General Antonio Guterres, (a former UN High Commissioner for Refugees), to speak up for the cause of the environmental refugees, as he has the right background of managing the global refugees situation for a long time.”
In an address to the UN Security Council in 2011, referring to the climate change, he said “It is a challenge which is adding to the scale and complexity of human displacement; and a challenge that has important implications for the maintenance of international peace and security.”
Even from this perspective, the environmental refugees turn out to have serious political implications for international peace and security, Chowdhury said.
The proposal to recognize “environmental refugees” has surfaced once again, this time against the backdrop of a major conference of non-governmental organisations (NGOs)—the International Civil Society Week (ICSW)– scheduled to take place in Fiji, December 4-8.
An annual forum co-organized by CIVICUS and regional or national platforms, ICSW brings together NGOs from all over the world for a key global gathering for civil society and other stakeholders to engage constructively in finding common solutions to global challenges.
And for the first time in more than 20 years of international convening, CIVICUS will hold its flagship event in the Pacific region.” The theme of the forum is: “Our Planet. Our Struggles. Our Future.”
According to the United Nations, about a third of the world’s 47 least developed countries (LDCs), including SIDS, described as the poorest of the world’s poor, are threatened by global warming and sea-level rise.
Selena Victor, Director of Policy & Advocacy, Mercy Corps Europe, told IPS global institutions and conventions must evolve to meet new and developing challenges, and climate change is one of the most pressing facing our world today.
“At Mercy Corps we recognise that people are forced to flee due to many factors; political persecution, war, violence, abject poverty, and climate change are just some of them”.
”It is absolutely critical that we maintain – and strengthen – the fragile protection available to those fleeing persecution – that does not lessen our obligation to help all those forced to flee for their own and their children’s survival,” Victor said.
“When faced with a growing number of displaced people around the world, the question we must ask ourselves is if people are running for their survival, should we make the distinction as to their reasons, or focus our efforts on support and providing refuge?”, she asked.
Simon Bradshaw, Climate Change Specialist at Oxfam Australia (who co-authored Oxfam’s recent policy paper on climate refugees) told IPS that climate change is already forcing people from their land and homes, and putting many more at risk of displacement in future.
He said supercharged storms, more intense and prolonged droughts, rising seas and other impacts of climate change all exacerbate people’s existing vulnerabilities and the likelihood of displacement.
“While climate change affects us all, the risks of displacement are significantly higher in lower-income countries and among people living in poverty. Women, children, indigenous peoples and other vulnerable groups are also disproportionately affected.”
Bradshaw also said the world’s atoll countries face a particularly severe challenge from climate change. Rising seas, increased wave heights and higher storm surges are inundating land on which communities grow food, contaminating the thin groundwater lens of which they depend for freshwater, and swallowing homes.
While relocation will always be an option of last resort, even conservative projections for sea level rise over the course of this century pose a grave threat to atoll communities and other low-lying populations around the world.
He pointed out that the loss of homes, livelihoods and ancestral lands through displacement epitomizes the human cost and grave injustice of climate change.
“Those least responsible for climate change are bearing the brunt of its impacts, and have fewer resources to cope with these new realities. However, much can and must be done to minimize the risk of displacement linked to climate change, and to guarantee rights, protection and dignity for those who are forced to move”.
A first priority, he argued, must be far more rapid reductions in global climate pollution, in line with limiting warming to 1.5C and thereby significantly reducing the risks and impacts of climate change.
Minimizing displacement also depends on supporting communities with building resilience to the impacts of climate change, which means increasing the scale and accessibility of international finance for climate change adaptation.
“And while recognizing that all possible measures must be taken to avoid displacement, it is also necessary to support strategies to ensure that people who are forced to can do so safely, with dignity, and on their own terms.”
Bradshaw said the negotiation by September 2018 of a new Global Compact on Migration offers a critical opportunity to help ensure safety, dignity and lasting solutions for those displaced or at risk of displacement as a result of the impacts of climate change.
It must reaffirm the need to minimize displacement by addressing the root causes of climate change and factors in vulnerability; encourage expanded channels for regular migration for those who are nonetheless forced to move; begin a process to ensure status and legal recognition for those displaced in the context of climate change; and ensure all solutions uphold human rights and sovereignty, and are grounded in the perspectives and priorities of affected communities.
This article is part of a series about the activists and communities of the Pacific who are responding to the effects of climate change. Leaders from climate and social justice movements from around the world will meet in Suva, Fiji from 4-8 December for International Civil Society Week.
The writer can be contacted at thalifdeen@aol.com