Rohingya Refugees: The Woes of Women – Part One 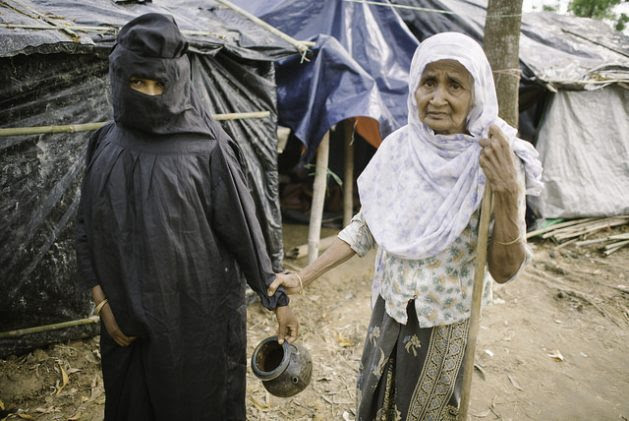 Rohingya women of Balukhali camp embarking on the trek to the toilets. Credit: Umer Aiman Khan/IPS
COX'S BAZAR, Bangladesh, Dec 7 2017 (IPS) - Afia* lines up her bucket every morning in the refugee camp for water delivery from humanitarian relief workers. On one particularly sweltering day, she kept four water pitchers in a row with gaps between them, hoping to insert another empty container in the space when the water arrived.
When another refugee saw this, she kicked away Afia’s pitchers, and a raging quarrel broke out. That night, the woman’s local boyfriend attacked Afia in her house, kicking her in the belly and hitting her mercilessly with a chair. Afia kept mum about the incident as her assailant threatened to kidnap and rape her in the jungle if she sought arbitration.
Afia is not one of the half a million Rohingyas who came into Bangladesh since this August from Myanmar. She is one of the thousands who have been living in the camps for years, and the water crisis has been exacerbated by the latest influx of refugees.
In the camps, men usually collect relief and water, with women going only when there are no males available. Since her husband left for Malaysia three years ago in search of work, she has not received any news from him and lives on her own in the camp, where scarcity of water is a heated issue and results in frequent altercations between the resident refugees.
While tubewells exist in the camps, many of them are dysfunctional as they are either too shallow and can no longer pump water, or have broken handles so no one can use them. 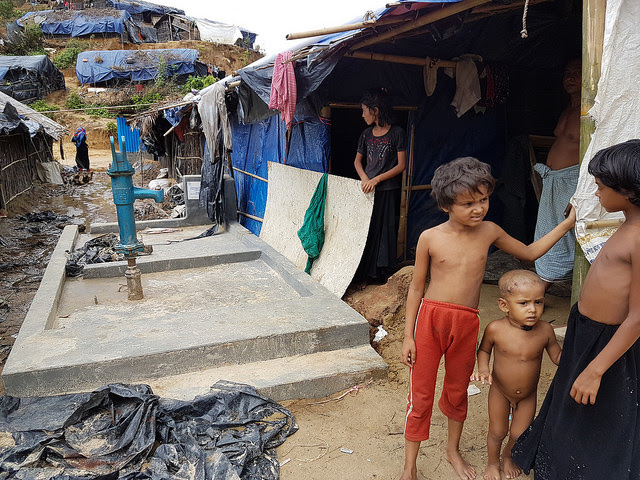 A dysfunctional tubewell in Kutupalong refugee camp in Bangladesh. Credit: Sohara Mehroze Shachi/IPS
Toilets
Women’s tribulations in the refugee camps do not end with water. Access to toilets is also a major problem. And the speed and scale of the recent influx – 624,000 arrivals since August and counting – have put basic services that were available in the camps prior to the influx are under severe strain. Spontaneous settlements have also sprung up to accommodate the new arrivals and these lack many basic amenities.
“There are no separate latrines for the women; the ones that exist do not have any lighting, are not close to their shelters and there’s absolutely no privacy,” said Shouvik Das, External Relations Officer of The UN Refugee Agency UNHCR in Bangladesh. “When we go to distribute food, sometimes the female refugees don’t want to take it because they then will need to go to the toilets and they dread that,” he added.
While many foreign and local NGOs and relief workers had set up tube wells and latrines for the refugees living in the camps, a safe distance was often not maintained between the latrines and the tubewells.
“Recently, the World Health Organization (WHO) found that over 60 per cent of water sources tested in the settlements were contaminated with E.coli. Much of the contamination is a result of shallow wells located less than 30 feet away from latrines,” said Olivia Headon, Information Officer for Emergencies with the International Organization for Migration (IOM), which is providing vital WASH services to both the Rohingya and the communities hosting them.
“While IOM supports private WASH and sanitation areas to provide privacy and safety to women in the Bangladeshi community, similar areas are under development in the Rohingya settlements but are hindered by the lack of space,” she explained. 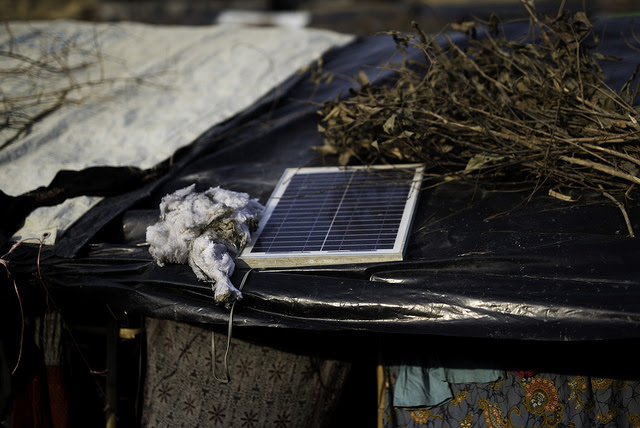 Cotton used for menstruation dried on roofs of shacks in Kutupalong Camp. Credit: Umer AIman Khan/IPS
Risks of disease outbreak
Labeled as the world’s most persecuted minority by the UN, the Rohingya lacked access to many basic rights in Myanmar, including healthcare. A large number of the new surge of refugees had been suffering from various diseases before their arrival, including Hepatitis B, Hepatitis C and Polio, and are now staying in cramped camps.
Their squalid living conditions, combined with scarcity of safe water and sanitation facilities, have triggered fears among health experts of disease outbreaks. And women, with their limited mobility and resources, are particularly at risk.
“Women will have to bear a disproportionate risk of the public health burden, and will be at the receiving end of all the negative environmental fallouts,” says Sudipto Mukerjee, Country Director of United Nations Development Program, Bangladesh.

The female refugees suffer the worst during their menstrual cycles, with most of them reusing unsanitary rags or cotton for months. This is not only increasing their risks of infection and skin diseases, but also affecting their mobility. As a recently published report by the UN Refugee Agency UNHCR reads, “Women and girls are limiting their movement because of not only the fear of being harassed, kidnapped or trafficked but also because of their lack of appropriate clothing and sanitary napkins.”
However, while development organizations have been supplying sanitary products to the refugee women, many of them do not know how to use them because they have never had access to them.
“Some of them put the sanitary pads as masks on their faces because they simply didn’t know what to do with them,” said Dr. Lailufar Yasmin, Professor of Gender Studies at BRAC University who has been working with the refugees in the camps.
“If the people who you are working with do not know what to do with the help you are providing, it will not be effective,” she added, “You will only be wasting money.”
*Names have been changed to protect the refugees’ identities.
The series of reports from the border areas of Myanmar and Bangladesh is supported by UNESCO’s International Programme for the Development of Communication (IPDC)