Credit: UN
ROME, Dec 18 2017 (IPS) - While the media may be attracted by images of migrants drowning or sold as slaves, another flagrant but lesser-known drama is that of care workers, who are overwhelmingly women, often migrants, and who make a very large contribution to global public health, but are exposed to great health risks themselves with little or no protection, let alone basic labour rights.
Migrant women care workers buttress health systems in countries where there are shortfalls in health-care provision, while their own rights to health and well-being can be eroded and their health-care needs unfulfilled, the UN leading health agency reminded on the occasion of the World Migrants Day on 18 December.
These migrant women care workers act as “a cushion for states lacking adequate public provision for long-term care, child care and care for the sick,” the World Health Organization (WHO) said.
Ageing in late industrial and middle-income economies, combined with rising demographic dependency ratios and female labour force participation, have led to emerging care deficits in many contexts in developed and developing countries, it explained.
“Around the world, more women are entering the labour force, taking them away from traditional unpaid caring roles in the home. Increasingly, immigrant women are being drawn into receiving country economies to care, often in informal settings, and frequently engaged by private households, without full access to social protection and labour rights.”
A striking fact is that fewer than 15 per cent of home-based long-term care workers are estimated to be formally employed.
For its part, the Organisation for Economic and Cooperation Development (OECD) International Migration Outlook2015 reported on the percentage of foreign-born workers among the total home-based caregivers of long-term care in a number of industrialised countries.

The Rohingya Crisis in Numbers by United Nations OCHA on EXPOSURE. Credit: UN OCHA
These percentages amounted to nearly 90 per cent in Italy, around 75 per cent in Greece, over 65 per cent in Spain, and 50 per cent in Luxembourg.
WHO’s report deals with paid home-based care workers who attend to the varied needs of children, older people, people with disabilities and the disabled and the sick.
Shocking Facts
Here are some key facts provided by WHO:
— Those who are hired informally often lack the statutory labour rights accorded to them through a contract, including pensions and benefits, and may receive wages that are significantly lower than those paid for equivalent work in the formal health-care system,
— Migrant women care workers face particular challenges because of the vagaries of immigration laws in various destination countries, which often prevent them from entering the country legally or taking paid employment.
— This lack of legal status puts undocumented immigrants working in the care sector in many countries at risk of abuse by unscrupulous employers.
— The care sector itself is rendered unable to fully benefit from the work of immigrant workers who may want to provide in-home care but are unable to find a legal path to enter the country or obtain employment.
— Migrant care workers generally encounter harsher working conditions and have fewer rights and less adequate health coverage than do native workers. Because care work is frequently relegated to the informal sector, employees find that access to health care or insurance is not guaranteed but granted at the whim of employers.
In the United States in 2010, for example, almost one quarter of foreign-born workers employed in health care support jobs, such as nursing, psychiatric, or home health aides lacked health insurance themselves.
— Much has been written about the poor conditions that care workers, especially migrants, regularly face, including low wages, long hours, and inadequate housing and food for those who “live-in.” Many studies report that such work often entails lack of respect and status and even verbal, physical and sexual abuse,
— In the most extreme instances, when recruiters or employers confiscate workers’ passports and deduct travel costs and other expenses from their wages (or fail to pay them altogether), care work jobs become a modern form of indenture
— Many migrant women care workers experience poor reproductive and sexual health. There is also ample evidence that they are subject to physical violence, including sexual harassment/ assault and regular beatings.
For example, 44 per cent of Filipina migrants reported knowing another domestic worker who had experienced physical abuse, 27 per vent knew someone who had experienced sexual harassment, and 22.4 per vent knew someone who had been raped. 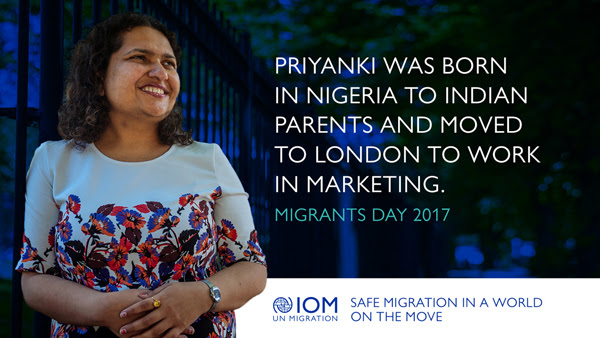 IOM marks International Migrants Day on 18 December with a series of worldwide events including a Geneva award ceremony for the Global Migration Film Festival. Credit: IOM
The Day
William Lacy Swing, director general of the UN International Organization for Migration (IOM), made an urgent call for “Safe Migration for a World on the Move” ahead of the International Migrants Day.
IOM plans to mark the Day with a series of worldwide events including a Geneva awards ceremony for the Global Migration Film Festival, which includes many public and private sector partners participating with IOM missions in over 100 countries.
In addition to film screenings in Geneva and New York, IOM also plans to participate in a UN leadership debate featuring UN secretary-general Antonio Guterres at Manhattan’s UNICEF House, touching on the global compact on migration, expected to be adopted by the end of 2018.
The UN leadership debate will explore the common ground on migration, rather than the divisions, said Swing. Despite often-sharp rhetoric, migration “is less a problem to be solved than a human reality to be managed.”
Planned UNICEF House events include the opening of the critically acclaimed art installation UNPACKED: Refugee Baggage (See: www.Together-in-NY.org), brining to life stories of refugees who have settled in the US by exploring past traumas through three-dimensional models of their homes mounted on suitcases they carried on their journeys.
Safe Migration, Not Leaky Boats
In an Op-Ed column penned for International Migrants Day: Our Right of Passage Should be Safe Migration, Not Leaky Boats), Swing wrote, “While we live at a time when a privileged elite considers global mobility virtually its birth-right, it is denied to countless others trapped in hopelessly bad economic or conflict circumstances.”
He warned that denial leads to “smuggling networks, human traffickers and modern-day enslavers who ply their trade these days with complete impunity.”
Hundreds of millions who are not part of the growing, truly global labour talent market find themselves outside looking in, and looking onto a world they can only dream of, Swing added. “They face enormous income disparities and hardships and no chance of getting a visa or a work permit.”
It comes as no surprise then that vast armies of hopeful young migrants want to climb aboard the “leaky boats” referred to by the UN secretary general, Swing continued, adding that driven by lack of economic opportunity, often exacerbated by climate change, they too are vulnerable to the siren song of social media.
“That’s where smuggling networks, human traffickers and modern day enslavers ply their trade these days with complete impunity. These cruel deceptions go unchecked, as the social media giants chase new markets in the global south.”
Just a quick reminder: a big power like the United States drew millions of migrants when it had an open-door policy in the late 19th and early 20th centuries.