According to the United Nations, one in nine people in the world today are undernourished. A crucial part of this complex problem is food production and distribution. The Sustainable Development Goals aim to provide nutrient-rich food for all and support agriculture, forestry, and fisheries through sustainable practices that encourage rural development. Promoting this goal requires both new research and modern technology together with traditional, people-centric approaches to serve those dependent on a flourishing food and agriculture system to earn a living while living a healthy life. IPS presents stories that explain the connections between economic and social empowerment, sustainable farming practices and hunger eradication. 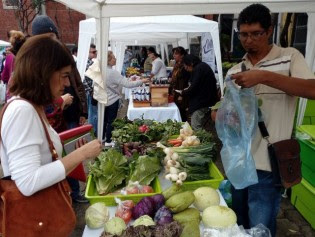 By Emilio Godoy
Azael Meléndez recalls the tornado that in May 2015 struck his hometown of San Gregorio Atlapulco, in Xochimilco, on the outskirts of Mexico City.

The Protracted Refugee and Migrant Crisis: A Challenge to Multilateralism

By Idriss Jazairy
It is an incontrovertible fact that more people are on the move owing to globalization. Fifteen percent of the world’s population are on the move worldwide. In other words, of the world population of 7 billion, one billion are on the move. Seven hundred and forty million people are referred to as internal or as domestic migrants within their countries of origin. The number of internally displaced persons reaches about 60 million. On top of this, the world has more than 244 million international migrants who cross borders often into the unknown. Lastly, there are 22.5 million refugees – encompassing the 5.3 million Palestinian refugees – registered by the United Nations High Commissioner for Refugees who have been forced to flee their home societies as a result of violence and armed conflict. The first two decades of the 21st century will go down in history as the era in which the world has witnessed the most complex and massive movement of people since the end of the Second World War.

By Becky Heeley
International Mountain Day and the Mountain Partnership’s 15th anniversary coincided on December 11, kicking off a three-day Mountain Partnership Global Meeting at the headquarters of the Food and Agriculture Organization of the United Nations (FAO) in Rome.

Are Value Chains a Pathway to Nutrition in Sub-Saharan Africa?

By Raghav Gaiha and Shantanu Mathur
Although difficult to ascertain whether it is a trend reversal, two recent FAO reports (2017a, b) show a rise in hunger globally as well as in Africa. The number of undernourished (NoU) in the world suffering from chronic food deprivation began to rise in 2014 –from 775 million people to 777 million in 2015 – and is now estimated to have increased further, to 815 million in 2016. The stagnation of the global average of the proportion of undernourished (PoU) from 2013 to 2015 is the result of two offsetting changes at the regional level: in Sub-Saharan Africa, the share of undernourished people increased, while there was a continued decline in Asia in the same period. However, in 2016, the PoU increased in most regions except Northern Africa, Southern Asia, Eastern Asia, Central America and the Caribbean. The deterioration was most severe in Sub-Saharan Africa and South-Eastern Asia (FAO 2017a,b).

Debate on Glyphosate Use Comes to a Head in Argentina

By Daniel Gutman
In and around the city of Rosario, where most of Argentina's soybean processing plants are concentrated, a local law banned the use of glyphosate, the most widely-used herbicide in Argentina. But two weeks later, producers managed to exert enough pressure to obtain a promise that the ban would be overturned.

Food Sovereignty as a Pillar of Self-Determination

By Brooke Takala
A recent meeting in Rome between our Pacific leaders and UN Food & Agriculture Organisation (FAO) highlighted the urgency of food security in our region given the reality of climate change affecting our agriculture and aquaculture.

Resistance to Antibiotics: The Good, the Bad and the Ugly

By Baher Kamal
The growing resistance to antibiotics and other antimicrobials due to their overuse and misuse both in humans and animals has become an alarming global threat to public health, food safety and security, causing the deaths of 700,000 people each year. This is a fact.

By Becky Heeley
At an event held on October 29 at the International Fund for Agricultural Development (IFAD) Gender Awards 2017, five countries were honored for impressive achievements in gender equality and women’s empowerment despite harsh conditions and numerous daunting situational and societal obstacles. The five countries are Bangladesh, Mozambique, Colombia, Morocco, and Mauritania. The IFAD supported projects in these countries have ambitious goals for a more egalitarian future. To date these projects have successfully provided women with decision-making opportunities, skill training, and increased autonomy through the development of their own livelihoods.

By Tharanga Yakupitiyage
The UN has made its largest appeal to work towards reaching the more than 135 million people across the world in need of humanitarian assistance and protection.

By Manipadma Jena
“Political resolve is the key for succeeding in our fight against oceans pollution,” Erik Solheim, head of UN Environment, who is leading hands-on the organisation’s global campaign to clean up seas and oceans of plastic litter, agricultural run‑off and chemical dumping, told IPS.

One Third of Food Lost, Wasted – Enough to Feed All Hungry People

By Baher Kamal
Believe it or not, the way to eradicate hunger from the face of the Earth is as feasible as it is handy. In fact, the current loss and waste of one-third of all food produced for human consumption would be just enough to feed the nearly one billion people who go to bed hungry every single night.

By Stella Paul
Land restoration is not a “glamorous subject even when you give all the numbers,” admits Monique Barbut, the Executive Secretary of United Nations Convention to Combat Desertification UNCCD). But she also stresses that by 2050, the world population will reach 10 billion. To feed that extra 2.4 billion, current food production would need to be increased by 75 percent.

By Elisa Webster, CARE International and Julia Marango
It’s been dry in Isavai on the island of Aniwa for last couple of years – ever since Tropical Cyclone Pam tore through Vanuatu in March 2015, leaving an El Nino-induced drought in its wake. A dry phase is bad news for farmers anywhere, but in Aniwa, where there is no constant water source and the only water supply comes almost exclusively from harvesting rain into tanks, it’s disastrous.

Good to Know (Perhaps) That Food Is Being ‘Nuclearised’

By Baher Kamal
It might sound strange, very strange, but the news is that scientists and experts have been assuring, over and again, that using nuclear applications in agriculture --and thus in food production—are giving a major boost to food security. So how does this work?

The Mekong, Dammed to Die

By Pascal Laureyn
In Laos, the lush forests are alive with the whines of drills that pierce the air. On the Mekong, a giant concrete wall rises slowly above the trees. The Don Sahong dam is a strong symbol, not only for a power-hungry Asia but also for what critics fear is a disaster in the making.

By Baher Kamal
While trillions of dollars are being spent on exploring remote galaxies, Planet Earth is still home to harsh realities that could be easily –and much less expensively—resolved. One of them is that worldwide 152 million children are currently victims of child labour.

Are Prospects of Rural Youth Employment in Africa a Mirage?

By Raghav Gaiha and Vani S. Kulkarni
Many recent accounts tend to dismiss productive employment of youth in rural areas in Africa as a mirage largely because they exhibit strong resistance to eking out a bare subsistence in dismal working and living conditions. We argue below on recent evidence of agricultural transformation that this view is overly pessimistic, if not largely mistaken.

By Friday Phiri
As negotiators meet in Bonn to put together a deal to implement the Paris Agreement, John Holdren, a professor of environmental policy at the John F. Kennedy School of Government, Harvard University, stressed that economic development and climate change mitigation and adaptation are not ‘either-or’ but must be pursued together.

By Tharanga Yakupitiyage
If aid deliveries are not resumed, Yemen will experience the worst famine the world has seen in recent decades.