Print | Send by email
UNITED NATIONS, Nov 30 2017 (IPS) - The 57 small island developing states (SIDS), including 20 described as territories which are non-UN members, are some of the world’s most vulnerable – both economically and environmentally.
The United Nations says their vulnerabilities are due primarily to their “small size, remoteness, narrow resource and export base, and exposure to global environmental challenges and external economic shocks, including to a large range of impacts from climate change and potentially more frequent and intense natural disasters.” 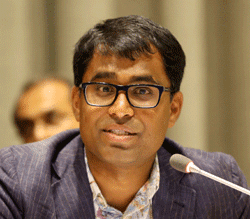 Dhananjayan Sriskandarajah, the secretary general and CEO of CIVICUS
As a result, they are faced with threats of sea-level rise and frequent hurricanes and typhoons resulting in a devastating impact on social and economic development, including on poverty, hunger, health care and human security, which are part of the UN’s 17 Sustainable Development Goals (SDGs).