Dr. Al Qassim: “The refugee and migrant crisis has become the symbol of the world’s inability to live up to the ideals of the Founders of the UN” | Inter Press Service

Dr. Al Qassim: “The refugee and migrant crisis has become the symbol of the world’s inability to live up to the ideals of the Founders of the UN” | Inter Press Service

Dr. Al Qassim: “The refugee and migrant crisis has become the symbol of the world’s inability to live up to the ideals of the Founders of the UN”

Print | Send by email
GENEVA, Dec 10 2017 (Geneva Centre) - The Chairman of the Geneva Centre for Human Rights Advancement and Global Dialogue H. E. Dr. Hanif Hassan Ali Al Qassim has called for the promotion of a value-driven human rights system to guide international decision-makers in their endeavours to address the impact of the migrant and refugee crisis. 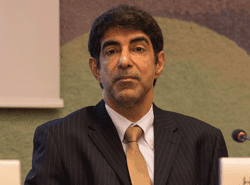 Dr. Hanif Hassan Ali Al Qassim
Dr. Al Qassim made this statement in relation to the observation of the 2017 International Human Rights day which is observed annually on 10 December.


The Geneva Centre’s Chairman said that the “refugee and migrant crisis have become the symbol of the world’s inability to live up to the ideals of the Founders of the UN and the Signatories of the 1948 Universal Declaration on Human Rights to promote peace and justice worldwide. The forced displacement of people from the Middle East and North Africa to Europe” – he said – “calls for concerted efforts to reduce the instability and turmoil which spreads across borders forcing people to be on the move.”
Dr. Al Qassim deplored recent attempts by decision-makers to deny refugees and migrants the right to freedom of movement and liberty as these distorted efforts “are contradictory to the founding principles of human rights. Over-securitization of migration and the fortification of countries of intended destination will not provide a long-term solution to address the current situation.
“I appeal to decision-makers in the Arab region and in Europe must work jointly to address the root-causes of forced displacement. The human rights and the fundamental freedoms of displaced people follow the denial of the right to peace, the right to development and the right to security.
“It is only when these human rights and fundamental freedoms are violated and infringed that people decide to take on the long and dangerous journey to seek a safe environment where human rights are expected to be protected and to flourish.
“Migrants and refugees are the symbol of brave and courageous individuals who stand up for their human rights and fundamental liberties and decide to put their lives at stake to enjoy the highest level of freedom,” remarked Dr. Al Qassim.
In relation to these observations, Dr. Al Qassim noted that the Geneva Centre will hold a panel debate on 14 December 2017 at the United Nations Office in Geneva on the theme of “Migration and human solidarity, a challenge and an opportunity for Europe and the MENA region.”
In this regard, the Geneva Centre has invited distinguished representatives from IOM, UNHCR, the Norwegian Refugee Council, International Catholic Migration Commission and the European Centre for Peace and Development to offer their insights on the need to promote a value-driven human rights system to address the adverse impact of the protracted refugee and migrant crises.
“Violence and insecurity as well as climate change migration have adversely affected millions of people in the MENA region and their fate has become a politically charged issue of high importance for the neighbouring countries in the MENA region and in Europe. We aim at promoting a discussion of these issues in their Europe-Middle Eastern interactive dimensions rather than through focussing on the two regions separately. This will enable the panel debate to identify holistic solutions to respond to the causes and consequences of the protracted migrant and refugee crisis,” highlighted Dr. Al Qassim.
The Geneva Centre’s Chairman also added that the panel debate will “adopt a Declaration that reiterates the importance of promoting a value-driven human rights system to promote and to advance the human rights of displaced people. Joint dialogue between decision-makers from the Global North and the Global South is required so as to respond with one voice to the challenges associated with the protracted refugee and migrant crisis.”
Dr. Al Qassim concluded his statement stating that “people on the move are entitled to have their human rights protected and restored. They cannot be denied both the right to life in their country of origin and the right to be migrants and refugees. Bedrock democracies that oppose ethnic cleansing, racism and violation of freedom of opinion cannot at the same time refuse shelter to their victims.”