As the world moves to implement the Paris Climate Change Agreement, the Caribbean—one of the most vulnerable regions to rising sea levels—faces a host of challenges, including accessing funding for adaptation and mitigation, protecting key sectors like tourism and agriculture, building resilience to natural disasters, and moving to a low-carbon development path. Much of the world’s most interesting work in addressing climate change, adopting clean energy and coming up with plans to stem deforestation has its roots in the developing world, where climate change impacts are often felt first and strongest. IPS looks at the wide variety of local, national and regional initiatives in the Caribbean that offer creative solutions to these problems. 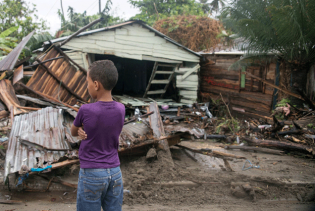 By António Guterres
As you know, we are coming off a jam-packed High-level week and opening of the General Assembly. Some of the most important speeches during that period came from leaders of Caribbean nations reeling from back-to-back hurricanes.

By Desmond Brown
As Hurricane Maria continues to barrel its way across the Caribbean, details are slowly emerging of the number of deaths and the extent of the devastation left in its wake in Dominica.

Caribbean Picks Up the Pieces After Monster Storm

By Kenton X. Chance
When Hurricane Irma ripped through the British Virgins Islands on Sept. 6, claiming seven lives, injuring an unknown number of people and destroying built infrastructure as well as significantly damaging the natural environment, the ferocity of the storm shocked many of the islands’ residents, including 72-year-old Egbert Smith, who has lived through plenty of severe storms.

By Desmond Brown
The tiny Caribbean island of Dominica has moved one step closer to its dream of constructing a geothermal plant, a project that is expected to reduce the country’s dependence on fossil fuels.

“New Normal” for the U.S., All Too Familiar for the Caribbean

By Kenton X. Chance
The government of St. Vincent and the Grenadines says it hopes that the devastating loss and damage that Hurricane Harvey has wrought in Texas might inspire the government of President Donald Trump to rethink its position on climate change.

By Jewel Fraser
Conversations about renewable and sustainable energy don't typically include artistic ideas on the subject. However, the Caribbean Community (Caricom) has chosen to engage the region's youth in the conversation by inviting them to create artistic works on sustainable energy for a regional competition.

By Desmond Brown
Saint Lucia's Prime Minister Allen Chastanet warns that the clock is running out for small states such as those in the Caribbean as they struggle to develop infrastructure capable of withstanding changes in weather conditions - and that wealthier nations need to step up levels of aid.

St. Lucia’s PM on Climate Change: “Time Is Against Us”

By Desmond Brown
A Caribbean Community (CARICOM) prime minister has reiterated the call for developed countries to assist Small Island Developing States (SIDS) in their quest to combat the effects of climate change.

Building Climate Resilience in Coastal Communities of the Caribbean

By Zadie Neufville
Ceylon Clayton is trying to revive a sea moss growing project he and friends started a few years ago to supplement their dwindling earnings as fishermen.

What Does “Climate-Smart Agriculture” Really Mean? New Tool Breaks It Down

By Desmond Brown
A Trinidadian scientist has developed a mechanism for determining the degree of climate-smart agriculture (CSA) compliance with respect to projects, processes and products.

By Ivet González
At the entrance, the Tierra Brava farm looks like any other family farm in the rural municipality of Los Palacios, in the westernmost province of Cuba. But as you drive in, you see that the traditional furrows are not there, and that freshly cut grass covers the soil.

By Zadie Neufville
Since 2013, Jamaica’s Met Office has been using its Climate Predictability Tool (CPT) to forecast ‘below average’ rainfall or drought across the island. The tool has allowed this northern Caribbean island to accurately predict several dry periods and droughts, including its most destructive episode in 2014 when an estimated one billion dollars in agricultural losses were incurred due to crop failures and wild fires caused by the exceptionally dry conditions.

By Desmond Brown
At the head of Guyana’s Essequibo River, 50 miles inland from the Atlantic Ocean, you will find the town of Bartica. Considered the gateway to Guyana’s interior, the town has a population of about 15,000 and is the launching point for people who work in the forests mining gold and diamonds.

By José Adán Silva
If the impact of drought and poverty in the municipalities of the so-called Dry Corridor in Nicaragua continues pushing the agricultural frontier towards the Caribbean coast, by the year 2050 this area will have lost all its forests and nature reserves, experts predict.

By Diego Arguedas Ortiz
Despite the fact that Central America is one of the regions most vulnerable to climate change, it has half-empty coffers when it comes to funding efforts against the phenomenon, in part because it receives mere crumbs in foreign aid to face the impacts of the rise in temperatures.

A Green Energy Shift in Barbados, One Streetlight at a Time

By Desmond Brown
The ever-escalating and volatile price of oil, and the high cost of importation, have left Barbados and other island nations in the unenviable position of having the highest electricity prices in the world.

By Desmond Brown
With wind, solar and other renewable energy sources steadily increasing their share in energy consumption across the Caribbean, Barbados is taking steps to further reduce the need for CO2-emitting fossil fuel energy.

By Jewel Fraser
As Tobago's tourism industry struggles to repel the sargassum invasions that have smothered its beaches with massive layers of seaweed as far as the eye can see - in some places half a metre thick - and left residents retching from the stench, the island's government is working to establish an early warning system that will alert islanders to imminent invasions so they can take defensive action.

By Diego Arguedas Ortiz
Jonathan Barrantes walks between the rows of shoots, naming one by one each species in the tree nursery that he manages, in the south of Costa Rica’s Caribbean coastal region. There are fruit trees, ceibas that will take decades to grow to full size. and timber species for forestry plantations.

By Desmond Brown
The Caribbean accounts for seven of the world’s top 36 water-stressed countries and Barbados is in the top ten. The Food and Agriculture Organisation (FAO) defines countries like Barbados, Antigua and Barbuda, and St. Kitts and Nevis as water-scarce with less than 1000 m3 freshwater resources per capita.