Can Korea Power Past Coal? A New World in Which “Solar+Batteries” Becomes the Cheapest Form of Energy | Inter Press Service

Can Korea Power Past Coal? A New World in Which “Solar+Batteries” Becomes the Cheapest Form of Energy | Inter Press Service

Can Korea Power Past Coal? A New World in Which “Solar+Batteries” Becomes the Cheapest Form of Energy 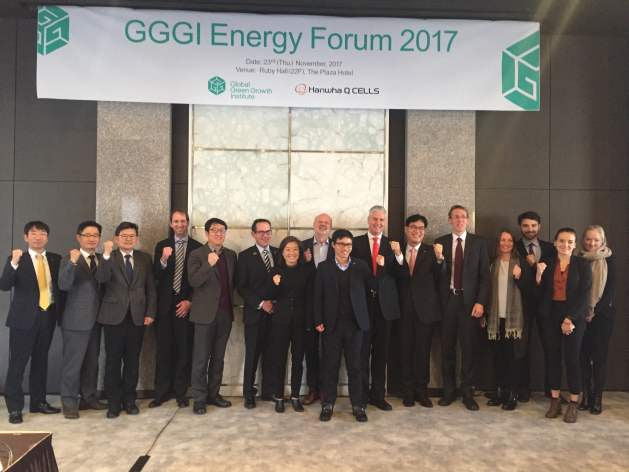 GGGI Energy Forum 2017, November 24, 2017, Seoul. Credit: GGGI
SEOUL, Dec 13 2017 (IPS) - Renewable energy became the cheapest form of electricity in 58 emerging economieslast year. This year, the 11th Lazard’s Levelized Cost of Energy Analysis (LCOE 11.0) showed that solar and wind energy generation costs (at $46 to $53 per megawatt-hour of generation) easily beat coal and gas (at $60-68).
Solar power was the fastest-growing source of new energy worldwide in 2016, outpacing the growth in all other forms of power generation for the first time. According to the International Energy Agency (IEA), on the back of a strong solar PV market, renewable energy accounted for two-thirds of new power added to the world’s grid last year. In addition to this, solar energy is set to surpass nuclear power by the end of 2017.
In November this year, the Global Green Growth Institute (GGGI) organized its first energy forum in Seoul at which GGGI Member countries shared their energy transformation experience.
In Germany, on one sunny breezy Sunday last summer, solar and wind broke a record 85% of all energy used in the country.
The rapidly growing renewable energy sector is quickly replacing nuclear energy in Germany – while coal is still playing a key role in the energy mix. In the UK, on the other hand, the use of coal in the energy mix has rapidly fallen from 50 to 9% in just ten years, replaced by cheap solar and offshore wind energy – while nuclear energy is maintaining a key role.
The Australian capital city, Canberra, has rapidly achieved the solar and wind investments to shift to 100% renewable energy by 2020, and is now moving to zero emissions by 2030, while the national targets are much more modest.
In the Republic of Korea, renewable energy currently accounts for just 2% of the country’s electricity production, with coal-fired and nuclear plants generating 40% and 30%, respectively. However, Korea’s new Moon Jae-in government has recently increased the target for the share of renewables in power generation to 20% by 2030. 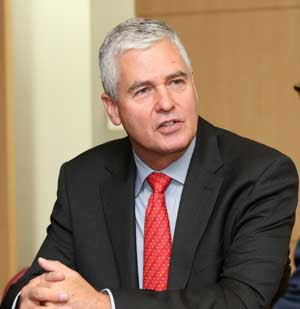 Frank Rijsberman.
The Korean government plans to set up a renewable energy coordination center in every region; secure a solar system in each village; adopt projects led by local authorities, including offshore wind turbines; and secure economic feasibility of renewable energy through utility-scale renewable energy projects. Is the 20% target too ambitious to achieve in Korea – or is it too modest to deal with the environmental and climate challenges?
The new government’s twin objectives for Korea to become a nuclear free society while also solving the “fine dust” air pollution problems is now actively debated in Korea. Doing both requires reducing nuclear energy, as well as the use of coal and diesel fuel for electricity and transportation. Truly an ambitious, even daunting, set of challenges – but not impossible during a time when both the energy and transportation sectors are experiencing very, very rapid transition.
The speed and depth of the ongoing energy transformation, to renewable energy and to electric mobility, is certainly surprising many around the world. It is a top priority for many governments – making and breaking coalitions – and it is causing disruption in traditional sectors of the economy and employment.
As one country after the next sees record breaking low prices for solar and wind in auctions for utility scale renewable energy, the conventional fossil-fuel powered energy companies pay the price.
In Bonn, at COP23, a new Power-Past-Coal Alliance of twenty countries announced that they will completely phase out coal from their energy mix before 2030. The Alliance hopes to have fifty members before the 2018 UN COP24 climate change conference. That requires a real change in mindset. Is it imaginable that Korea Powers Past Coal by 2030?
E.ON, Germany’s largest utility, for example, had to write off $9Bn in losses last month, half of its remaining market capitalization. No wonder the renewable energy transformation scares the conventional power players and has governments consider whether to protect them.


Countries with large investments in conventional power plants – particularly coal and nuclear – do indeed have a big bill to pay for their stranded assets. Coal-fired power plants that were the cheapest form of energy when constructed only a few years ago risk become albatrosses around energy companies’ necks.
In Bonn, at COP23, a new Power-Past-Coal Alliance of twenty countries announced that they will completely phase out coal from their energy mix before 2030. The Alliance hopes to have fifty members before the 2018 UN COP24 climate change conference. That requires a real change in mindset. Is it imaginable that Korea Powers Past Coal by 2030?
It may seem unrealistic today, but remember that a similar change in the UK just happened, over a shorter period, during a time when renewables were more expensive than today. So why not in Korea?
There are some challenges of course. For example, will this energy transition lead to job losses? Jobs are indeed being lost rapidly in the fossil fuel industry, particularly coal. In Germany, for example, most coal related jobs have already been lost – but at the same time, many more jobs were created in the renewable energy industry.
According to Hans-Josef Fell, a former German parliamentarian for the Green party and current President of Energy Watch Group, the global energy transition to a 100% renewable electricity system can create 37 million jobs by 2050, up by more than 90% from 2015.
As in any rapid technology transition, jobs will indeed be lost, but more new, green jobs are being created, requiring education and re-training of the workforce, but ultimately leading to many new opportunities for businesses and individuals. 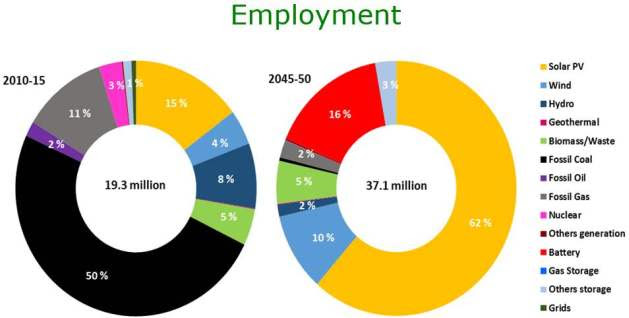 Another question is whether renewable energy is too expensive and whether citizens will support a rapid transition to renewables. In Australia, Canberra has powered forward to 100% renewable energy by 2020, leading national action on climate change while creating new jobs in sunrise industries.
The ACT government is leading this green technology revolution in Australia with the full support of its citizens. When the ACT government first announced its plans to legislate a target of sourcing 100 percent renewable energy by the end of this decade, it was careful to engage the community.
The first programs focused on subsidies for rooftop solar for schools, churches, community centers and residences.  As a result, all schools and one home in 10 are now equipped with solar on the roof.
Subsequently, and with full community awareness created, ACT government turned to utility scale wind and solar investments, and batteries to stabilize the grid. The costs of large scale solar in Australia has halved in just a few years. While the introduction of renewables did indeed initially raise energy prices for Canberra, surveys of residents show that as awareness increased, so did the willingness of the citizens to pay more for sustainable energy.
Going forward, the price of energy in Canberra will be among the lowest in the nation. Following the success of the 100% renewables strategy, in 2016 Canberra went a step further and committed to net zero carbon emissions by 2050.
For countries that could not provide electricity to all their citizens with fossil fuel and a centralized power grid – such as most African countries and most small island states in the Pacific with coverage rates as low as 10-20% – the renewable energy transition is a wonderful opportunity.
When the alternative is expensive diesel-generated electricity, either powering the grid or as back-ups during power outages, solar energy combined with battery storage is already the cheapest form of energy, as documented in Lazard’s 11th levelized cost of energy report that came out last month.
That means that for countries in Africa and the Pacific, off-grid, or mini-grid electricity based on “solar+batteries” is a revolution that can bring affordable energy to all citizens, just like the mobile phone revolution did less than ten years ago.
The energy transition is undoubtedly challenging for countries like the Republic of Korea that have fully developed conventional energy sectors – particularly for the owners and operators of the nuclear and fossil fuel power plants, equipment and machinery.
At the same time, Korea has some very significant advantages, such as an excellent national power grid, advanced smart grid technology, and some of the world’s most advanced producers of solar cells and batteries.
During times of disruption our perspectives change very rapidly. Targets such as the Korean 20% renewables by 2030, that appear so challenging today, will probably be seen as only a first step in the right direction in just five years from now.