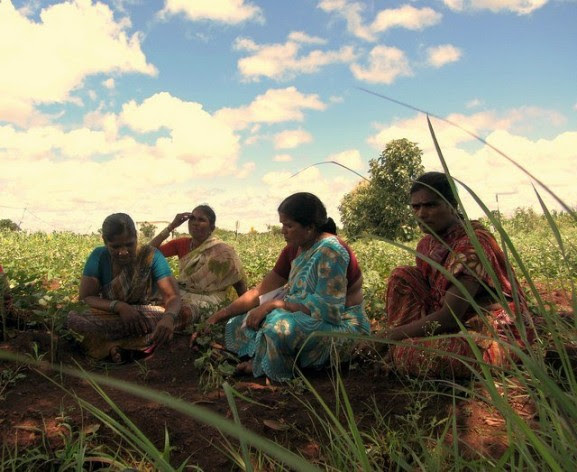 Women village councilors in Penakota, a village in southeast India, go out into a field to relieve themselves, as there are no toilets in their workplace. Credit: Stella Paul/IPS
UNITED NATIONS, Nov 27 2017 (IPS) - What would life be like without access to a toilet? What if our waste was not properly disposed of?
For those in the developed world, such questions are hard to fathom, but for 2.3 billion people around the world it’s a reality. Without access to a toilet many are forced to defecate in the open, significantly increasing the changes of spreading diseases.
The sixth Sustainable Development Goal (SDG’s) include a pledge that aims to provide everyone with access to toilets and improved sanitation services by 2030.
“It is possible to reach these targets, we all share the vision of the SDG 6 and we know there has been considerable progress made already.”
“However, meeting the target will require a step-change in our ambition and action,” says WaterAid UK’s Tim Wainwright.
So far progress has been made. According to the UN’s children’s agency UNICEF, in the last 15 years alone, some 371 million people moved out of open defecation – about 25 million people per year.
With improved access to toilets and sanitation systems that properly manage waste, WHO estimate that up to 842,000 deaths could be avoided each year.
Improvements such as this have been in part due to the efforts of agencies such as UNICEF and charities like Water Aid. Both are committed to helping end open defecation, a practice carried out by as many as 900 million people around the world.


Open defecation is defined as the act of eliminating waste in the open – whether it be on the street, behind bushes or near running water.
The poor sanitary practice has been linked to spreading disease including, but not limited to:  cholera, diarrhea, dysentery, hepatitis A, typhoid and polio. Unsurprisingly, nations where the practice is most prevalent are also the countries that report the highest rates of child mortality per year.
“It contributes to a health crisis which claims the lives of 289,000 children under five each year, from diarrhea diseases directly linked to dirty water, poor sanitation and poor hygiene,” Wainwright told IPS.
Wainwright stressed that ending the practice would involve more than just implementing toilets.
He said that “behavioral change through education” is needed to ensure that people become accustom to using toilets.
But improving global sanitation and meeting SDG 6 doesn’t end there. After all, even when there is a toilet – what happens to the waste?
It was this question that was given a platform when the United Nations marked World Toilet day earlier this month.
Addressing a roundtable conference to mark the day, the United Nations Deputy Secretary-General Amina Mohammed focused on the full sanitation cycle, emphasizing safe disposal of waste and waste-water.
“Some systems provide treatment and safe disposal in situ, while others are connected to a sewer.  But for many onsite sanitation systems, there is a need for safe emptying and transport.”
“Pit latrines and septic tanks need to be regularly emptied and the waste taken to a treatment facility.”
“For billions of people, such proper sanitation systems are either non-existent or ineffective.”
Indeed, according to WHO, only 39 percent of the global population has access to sanitation service that safely removes their waste.
UNICEF and WHO have been keeping track of global sanitation and hygiene improvements since 1990 through their ‘Joint Monitoring Program’ (JPM).
A spokesperson for UNICEF told IPS: “SDG6 represents an opportunity to shape a much healthier world and we are tracking progress towards its ambitious targets, through the JPM.
“It (the JPM) aims to capture progressive improvements in global sanitation systems. It tracks through sanitation ladders, places with no sanitation services at all – which is open defecation – through to basic sanitation, to safely managed sanitation.”
With improved access to toilets and sanitation systems that properly manage waste, WHO estimate that up to 842,000 deaths could be avoided each year.
When discussing other outcomes of improved services, Water Aid’s Wainwright, stressed that one of the biggest outcomes would be improved lives for women and girls.
“There is a gender element to all of this. We know the impact of not having good sanitation is often worse for women and girls,” said Wainwright.
“For example, they are more likely to be subject to harassment or assault if they have to find a place outdoors to relieve themselves; they are more likely to bear the burden of walking long distances to collect water… and adolescent girls are more likely to miss school if there aren’t safe, private places in which to care for themselves during menstruation.”
Fortunately, SDG 6 acknowledges these issues by striving to ensure “adequate and equitable sanitation” whilst “paying attention to the needs of women and girls and those in vulnerable situations.”
A commitment to vulnerable groups is something that sets the SDG’s apart from the Millennium Development Goals, which were more generalise in its sanitations goals when they are were eventually added to the original MDG’s in 2002.