What we know about the 200 mass graves that ISIS left in Iraq with 12,000 bodies | The Indian Express

What we know about the 200 mass graves that ISIS left in Iraq with 12,000 bodies | The Indian Express

What we know about the 200 mass graves that ISIS left in Iraq with 12,000 bodies

Most are in the four provinces of northern and western Iraq where the Islamic State’s caliphate acted as the government. 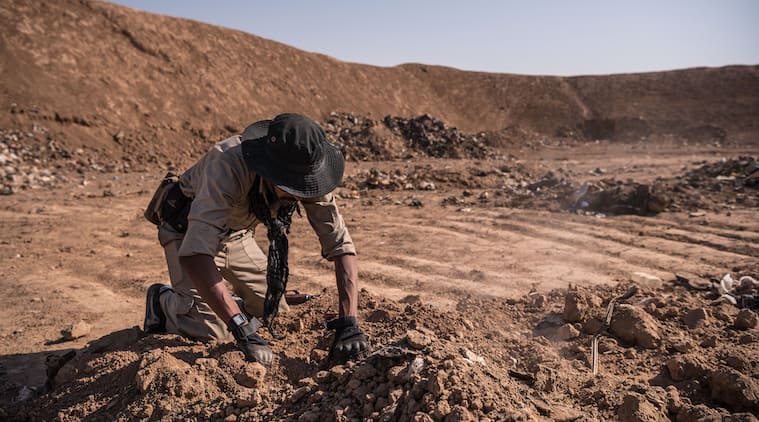 An Iraqi army soldier searches for remains at a mass grave that was discovered at a trash dump site on the outskirts of Hammam Al-Alil after it was liberated by Iraqi forces, in 2016. (Source: The New York Times)
More than 200 mass graves holding as many as 12,000 bodies have been found in areas of Iraq once controlled by the Islamic State, the United Nations said on Tuesday. The findings were highlighted in a joint report released by the U.N. mission to Iraq and the Office of the High Commissioner for Human Rights, which called the sites a “legacy of

Where Are the Graves, and What Are They Like?

Most are in the four provinces of northern and western Iraq where the Islamic State’s caliphate acted as the government: Anbar, Kirkuk, Salahuddin and Nineveh, which includes Mosul, the largest city once controlled by the extremists. They range from small burial sites with eight bodies, to massive pits believed to hold thousands. The biggest is believed to be the Khasfa Sinkhole near Mosul.
“I can only say that the number of the victims of the mass graves is much bigger than the numbers in the report,” said Dhia Kareem, head of the Mass Graves Directorate in Iraq. He said eyewitnesses estimated there were 6,000 bodies in the Khasfa Sinkhole.
“ISIL’s horrific crimes in Iraq have left the headlines, but the trauma of the victims’ families endures, with thousands of women, men and children still unaccounted for,” Michelle Bachelet, the U.N. human rights commissioner, said, referring to the Islamic State. “These graves contain the remains of those mercilessly killed for not conforming to ISIL’s twisted ideology and rule.”

Why Is This Discovery Important?

While the extremists made no secret of their systematic violence, there has been little accountability for what they did. During its three-year rule, the Islamic State terrorised local residents, often releasing videos of executions of people targeted for government ties, sexual orientation and more. The militants also went after members of ethnic and religious minorities, including Christians and Yazidis.
In the Yazidi homeland of Sinjar, 69 mass graves have been identified, Iraqi officials said.
But so far, few criminal investigations have been conducted. The grave sites could provide valuable forensic evidence, but the scale of the job has made collections daunting. The deaths occurred in what the United Nations has labeled systematic and widespread violence, a campaign that “may amount to war crimes, crimes against humanity, and possible genocide.”

What About the Families of Victims?

The U.N. said it was likely that more mass graves would be discovered, which will only worsen the situation, especially for families of victims. Iraqi authorities have so far exhumed only 1,258 bodies from 28 sites, the U.N. said, because of a lack of government resources at the Mass Graves Directorate. The U.N. urged officials to identify the victims quickly and to return the bodies to relatives. But it also recognised that Iraqi authorities need more resources to make that happen, while preserving evidence of crimes, and it urged the international community to help.
Fatin Al-Hilfi, a member of Iraq’s human rights commission, praised the U.N. report for recognising “the negligence of the government toward the mass graves team and the lack of logistical support.”
The report also noted that Iraqi bureaucracy made it difficult for people to find missing relatives because information was not held in a centralised way. “Their families have the right to know what happened to their loved ones,” Bachelet said.
Investigators recommended setting up a nationwide databank, similar to those set up in Bosnia and Rwanda.

Do the Graves Add to What Is Known About the Scope of ISIS Killings in Iraq?

It is too early to say. The U.N. has estimated that 30,000 civilians were killed by the Islamic State from 2014 to 2017 — “a number that should be considered an absolute minimum.” But many of those victims were found and buried by their families. That so many thousands are in the 202 mass graves identified so far is shocking — and only 28 of those graves have been thoroughly exhumed.
Publicado por salud equitativa en 4:36