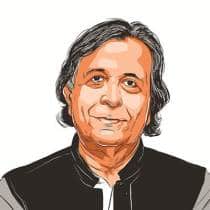 Hall of Nations-Nehru Pavilion must be rebuilt as a tribute to his vision of India.
Raj Rewal

Hall of Nations-Nehru Pavilion must be rebuilt as a tribute to his vision of India. Nehru was not only a great leader of India but of Asia and the developing world as a whole. (Express archive)
Jawaharlal Nehru had formulated the idea of India long before the country’s Independence. He had foreseen the problems related to India’s multicultural and multi-religious values. In his book, The Discovery of India, Nehru wrote, long before 1947, about the difficulties regarding uniting people with diverse languages, religions and cultural values. At the same time, as a historian, he could sketch the unifying forces which connected India right from the Ashokan period to pre-Independence India. His grasp of Buddhist philosophy and his admiration of the agnostic aspects of the Hindu religion from the earliest Upanishada is evident. He was also fully aware of the dark phases of India’s history, and its weakness, as well as its great achievements.
“We are citizens of no mean country and we are proud of the land of our birth, of our people, our culture and traditions,” he said. “That pride must never allow us to forget our many weakness and failings or blunt our longing to be rid of them.”
I was given the task of enshrining Nehru’s ideas, values and his times in a museum-pavilion in the Pragati Maidan, near the Hall of Nations which was built to celebrate the 25th year of Independence. My aim was to design a memorial which would reflect Nehruvian values. He was an intellectual and a statesman who would have detested any pompous monument in his memory. Finally, after a lot of reflection, I designed a grass mound in the form of a Buddhist yantra, which could be built within eight months. The pavilion had two floors. The upper floor was utilised to show films on his life along with some of his more well-known speeches.
It was Nehru’s ideals — inclusive growth, democracy and the upliftment all sections of society — which was celebrated in this museum. Nehru was not only a great leader of India but of Asia and the developing world as a whole. He was a visionary with modern concerns. Nehru represented the spirit of new India on the one hand, as well as the austere values of Mahatma Gandhi. He imbibed the ideals of democracy and secular values along with nation-building strategies.
The Nehru Pavilion, housed permanently on the ground floor, has artefacts which had already been designed by famous American designer Charles Eames and told the story of Nehru’s life and times in a sensitive manner which had already been exhibited earlier in America and England.
Eames quotes Nehru in the exhibition panel: “What have I discovered? She is a myth and an idea, a dream and vision and yet very real and present and pervasive. There are terrifying glimpses of dark corridors which seem to lead back to the primaeval night, but also there is the fullness and warmth of the day about her.”
Why were these buildings demolished? The community of architects from India, Asia (through ARCASIA and the Union of International Architects) had pleaded with Prime Minister Narendra Modi to spare these buildings, as they form an integral part of India’s iconic architecture. In fact, the curators of three world museums — the Museum of Modern Art, New York, the Centre Georges Pompidou, Paris and M+, Hong Kong, wrote to the Minister of Commerce in this regard.
The curator of the Pompidou museum, Aurelien Lemonier wrote: “The Hall of Nations and the Nehru Pavilion are outstanding representatives of India’s post-independence architectural heritage and, for this reason, must be preserved.”
Despite these pleadings, the buildings were demolished. It is hard to believe that Prime Minister Modi is against the “Idea of India” and the first 25 years of work carried out in the country, which is enshrined in the “Make in India” structure of the Hall of Nations.
Two days before the demolition of the complex, the Government of India had written to the Indian Trade Promotion Organisation (ITPO) to find an amicable solution that would lead to the preservation of these iconic structures. These words were either ignored — or was there some sort of confusion?
Recently, Rs 3,000 crore has been spent on the spectacular statue of Vallabhbhai Patel, a great son of India, to symbolise the unity of the country. For Nehru’s birthday, can Rs 300 crore be spent to rebuild the Hall of Nations-Nehru Pavilion Complex? The matter is pending before the courts but the prime minister could be gracious and rectify the mistake of the ITPO.
The writer is an architect and urban design consultant
Publicado por salud equitativa en 5:54