Print | Send by email
Osprey Orielle Lake is the founder and executive director of the Women's Earth and Climate Action Network (WECAN) International and co-chair of International Advocacy for the Global Alliance for the Rights of Nature. She is the author of the award-winning book Uprisings for the Earth: Reconnecting Culture with Nature.

Emily Arasim has served as WECAN International's media and communications coordinator and project assistant since 2014. She is an avid photojournalist, writer and farmer from New Mexico. 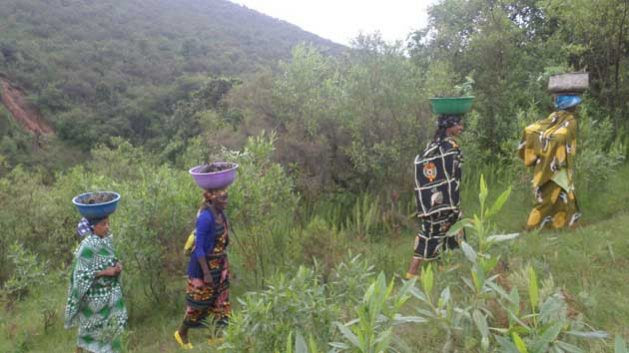 Women in the Democratic Republic of Congo work to reforest the Itombwe region as a part of WECAN/SAFECO program. Credit: Stany Nzabas
SAN FRANCISCO, Oct 29 2018 (IPS) - The latest Intergovernmental Panel on Climate Change (IPCC) report, which arrived thunderously in October, concludes that we have only 12 years remaining to transform our energy systems and ways of living to limit the worst effects of climate change.

The IPCC report stands as the loudest clarion call yet from global climate scientists, stating that we must act immediately to keep global warming to a maximum of 1.5°C temperature rise, beyond which, by even half a degree, ecological and social consequences are catastrophically amplified.
As we look around the proverbial room for answers and solutions in this moment of intensified clarity and urgency, it is imperative that we turn to one of the main untold stories of the climate crisis – the story of women leading climate solutions.
Research including Project Drawdown, United Nations reports and programs, and many other studies, all confirm that one of the most important strategies for a sustainable and thriving future is upholding the rights, and supporting the education and leadership of women.
While women are central to solutions, they also are disproportionately impacted by the negative effects of global warming due to unequal gender norms, which marginalize women’s voices, and impact women’s economic opportunities, rights, bodies, education, and political power. From natural disasters, to food system stress, to water pollution – women experience the impacts of climate change first and worst. 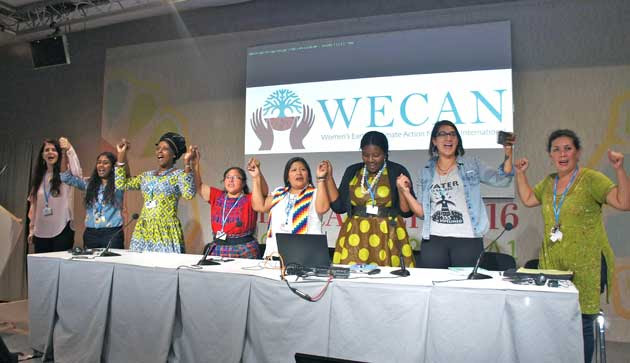 Frontline women leaders during at WECAN International event at the UN Climate Talks. Credit: Emily Arasim/WECAN International
Additionally, when women advocate to protect the water, forests, land, seeds, climate, and future generations with which they are so intimately linked – they are increasingly experiencing violence and criminalization, including perverse gender-based violations.
Nevertheless, women fight on, and are at the forefront of some of the most innovative and transformational projects being undertaken around the world.
In Ecuador, Indigenous women lead movements to protect their communities and the Amazon rainforest from oil extraction.
In the Democratic Republic of Congo, women participating in a Women’s Earth and Climate Action Network program are contributing to the reforestation of the Itombwe region as they restore the ecology of the rainforest community, provide for household uses, and protect the ancient old-growth forests.
In many parts of India, rural women are spearheading efforts to protect agriculture biodiversity, build food security, and steward water, soils, and community health.

Frontline women leaders and allies take action outside of the United Nations in New York following a WECAN event. Credit: Emily Arasim/WECAN International
Across North America, indigenous women are taking action at the forefront of the global movement for fossil fuel divestment – and these are just a few of the countless examples of what women are doing to change the current trajectory of the climate crisis.
In order to provide a window into the plethora of solutions that women are engaged in, the Women’s Earth and Climate Action Network produced ‘Women Speak: Stories, Case Studies And Solutions From The Frontlines Of Climate Change’, an online research and story-telling database designed to shift the narrative on how we build equitable climate solutions.
‘Women Speak’ allows policy makers, journalists, activists, educators, students, and others, to explore thousands of stories by and about global women leaders working in areas such as forest and biodiversity protection; fossil fuel resistance efforts; ecologic agriculture; renewable energy; climate law and policy; education and grassroots movement building; and much more.
As the database illustrates, women have the social capital to work at the local and global level to create the restorative communities and economies that we need for a just transition with democratized, regenerative renewable energy for all.
However, even with all the studies and examples available, women’s climate leadership continues to be undervalued, underreported, and underfunded.
Given the short timeline for action identified by the IPCC report – we simply cannot afford to keep ignoring the direct connection between women and effective responses to climate change. To act on climate with justice and results means uplifting the voices of women – particularly of grassroots women, Indigenous women, and women of color – who have a long history and knowledge of living close to the land and of resistance efforts, and who are offering countless examples of successful community-led solutions.
If we are to truly address the multiple and interrelated crises we face, we also cannot afford to ignore the link between patriarchy, colonization, capitalism, and the historic and ongoing assault of the Earth and women.
Extractivism and exploitation of both women and the Earth are derived from the same ideology of domination and supremacy – and it is imperative that plans to address climate change take into account the root causes of the crisis.
Now is the time of women rising to protect and defend the Earth. Now is the time to vote women into office. Now is time to hear the voices of women and support their efforts.
Now is the time to act on the scientific and experience-based truth that women’s leadership is key to addressing climate change.