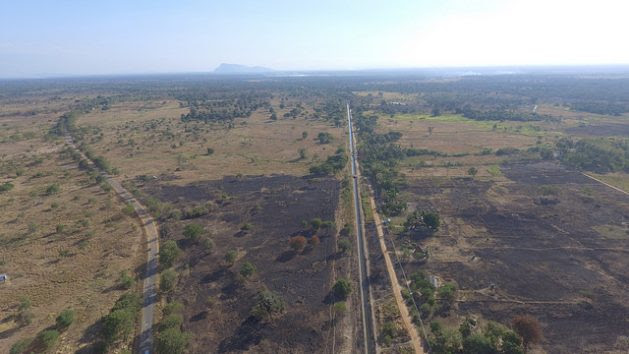 Large tracts of land, like these in the Sinhapura area of Sri Lanka’s North Central Polonnaruwa Province, have been degraded by years of overuse. Credit: Sanjana Hattotuwa/IPS
UNITED NATIONS, Nov 13 2018 (IPS) - A new landmark initiative aims to make quality data and tools available to the international community in order to combat an “existential crisis”: land degradation.
The Land Degradation Neutrality Initiative (LDN), launched by United Nations-backed partnership the Group of Earth Observations (GEO), aims to put data directly into the hands of local and national decision makers to help stop and reverse environmental degradation.

“Land degradation is an existential crisis. Until now, monitoring it in real time felt like an insurmountable challenge. No longer,” said Executive Secretary of the United Nations Convention to Combat Desertification (UNCCD) upon welcoming the new initiative.
“With Earth observation datasets and the practical tools to use them readily available, decision-makers and land users will have immediate and actionable information to scale up sustainable land management and planning. It is a first step to boosting our resilience,” she added.
According to the UNCCD, land quality is getting worse as over 75 percent of the world’s land surface is significantly and negatively impacted by human activity across 169 countries.
The consequences of the growing problem includes more and severe droughts, high loss of wildlife, internal displacement, and forced migration.
In fact, without urgent climate action, Sub-Saharan Africa, South Asia, and Latin America could see more than 140 million people move within their own countries by 2050, further increasing competition for shrinking space.
The lack of action on one of the world’s biggest environmental problems is largely due to the lack of accurate data and tools to monitor it.
“At national and local levels, monitoring has been essential to government responses to land degradation,” UNCCD’s Policy Officer Sasha Alexander and lead scientist Barron Joseph Orr told IPS.
They also noted the lack of uniform indicators in order to monitor and measure land degradation.
In 2009, a global survey revealed that nearly 1,500 unique indicators were being used by countries to monitor the challenge.
“In order to have a harmonised understanding of this major environmental challenge, it has become clear that a minimum set of essential variables, combined with the flexibility for countries to add additional indicators deemed nationally or locally relevant, would be necessary,” Orr said.
The GEO LDN initiative, unveiled in Kyoto last week, hopes to bring together Earth Observation (EO) data providers and governments in order to develop quality standards, analytical tools, and capacity-building to strengthen land degradation monitoring and reporting.
The importance of such data is also recognised in the globally-adopted Sustainable Development Goals (SDGs) which includes a target to combat desertification and land degradation and an indicator to assess the proportion of land that is degraded over total land area.
Of course, data alone will not be enough to combat degradation.
But with the right data, governments will be able to prioritise interventions as well as plan and manage land better.
“Using an agile development approach…governments with limited capacity are now able to do far more with monitoring data than in the past, not only reporting at the global level, but using what is being learned from these data sets to make the course corrections necessary to help ensure the right mix of interventions to avoid, reduce and reverse land degradation,” Alexander told IPS.
She pointed to the case of Brazil which successfully implemented a project to reverse degradation in the drylands region of northeastern Brazil.
After using data to identify priority areas, the Recovery Units of Degraded Areas and Reduction of Climate Vulnerabilities (URAD) initiative was established to finance actions including the provision of techniques and trainings to municipal governments.
The initiative recognised that environmental actions alone will not be sufficient as economic and social aspects must be taken into account in order to have lasting change.
While local communities have long been suspicious of government projects, the effective participation of populations and the project’s promotion of sustainable value chains and income generation help inspire “noticeable attitude and behaviour changes.”
Alexander noted that Brazil provides an example of how LDN can be achieved, and why it is crucial to link global and national monitoring with more site-specific monitoring at the project level.
The GEO LDN initiative has already been garnering interest worldwide from developing and developed countries alike.
Following the launch, Germany committed 100,000 Euros towards the cause, and more can be expected to come.
The GEO LDN initiative is a result of UNCCD’s call made at the Conference of the Parties (COP13) to bring data providers and users together and support global efforts to halt, reduce, and reverse land degradation