US border inspectors are processing only about 100 asylum claims a day at Tijuana's main crossing to San Diego, creating long waits. 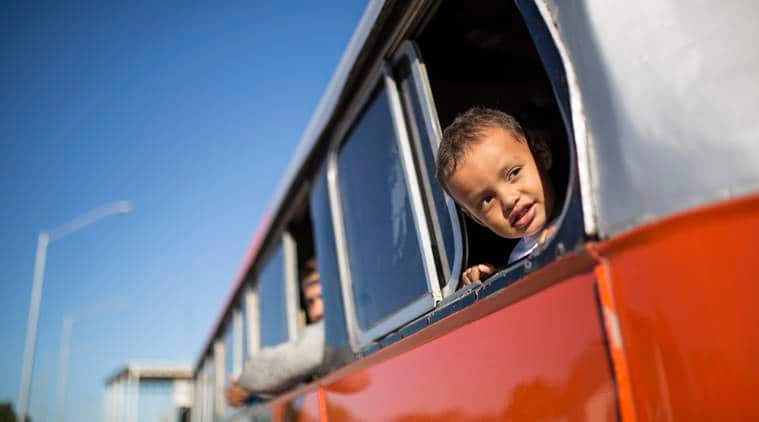 One-year-old Richard Mejia, who is part of the Central American caravan hoping to reach the US border, pokes his head out a bus window, in La Concha, Mexico. (AP Photo/Rodrigo Abd)
With about 3,000 Central American migrants having reached the Mexican border across from California and thousands more anticipated, the mayor of Tijuana said Friday that the city was preparing for an influx that will last at least six months and may have no end in sight.
Juan Manuel Gastelum said there were 2,750 migrants from the caravan in Tijuana and that estimates by Mexico’s federal government indicate the number could approach 10,000.
“No city in the world is prepared to receive this _ if I’m allowed _ this avalanche,” he said during a news conference at City Hall. “It is a tsunami. There is concern among all citizens of Tijuana.”
U.S. border inspectors are processing only about 100 asylum claims a day at Tijuana’s main crossing to San Diego, creating long waits. Asylum seekers register their names in a tattered notebook managed by migrants themselves that had more than 3,000 names even before the caravan arrived.
Along the nearly 3,000 miles (nearly 5,000 kilometers) from the caravan’s origin in San Pedro Sula, Honduras, to this city on the Pacific Ocean, the migrants have stopped in most places for only a single night, with some exceptions.
That overwhelmed small towns in southern Mexico in particular _ but only briefly. The migrants’ expected long stay in Tijuana has raised concerns about the ability of the teeming border city of more than 1.6 million to handle the influx. 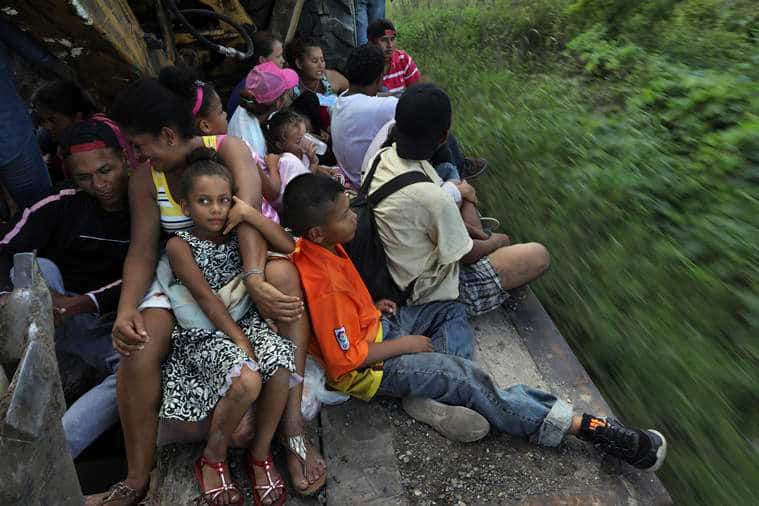 Central American migrants, part of the caravan hoping to reach the U.S. border, travel on a truck in Loma Bonita, Oaxaca state, Mexico, Saturday, Nov. 3, 2018. (AP Photo/Rodrigo Abd)
Pleading for financial support from the Mexican government, Gastelum sternly warned migrants against criminal behavior, though authorities reported only seven arrests so far _ five for drug consumption and two for disorderly conduct.
“Supposedly they are fleeing catastrophe, mistreatment in their countries of origin. How is it possible that they arrive here and, if they want, create disorder?” the mayor said. “It’s not right.”
His language linking the latest arrivals to crime underscores how the caravan is already testing Tijuana’s proud history as a melting pot for immigrants, a tradition that Gastelum also highlighted.
A municipal gymnasium and recreational complex that has been converted to a shelter was expected to register up to 1,000 people Thursday night but ended up housing more than 2,000, including more than 400 children.
Tijuana officials said they opened the shelter as part of an effort to keep migrants out of public spaces. The city’s privately run shelters are meant to have a capacity of 700.
At the municipal shelter, long lines formed for showers and meals of tuna casserole or noodle soup with coffee. Outdoor canopies covered rows of mattresses and blankets.
A woman singing Mexican “ranchera” music on a loudspeaker drew a small crowd, while men congregated in circles to play cards. Eighteen new portable toilets on a grass field made bathroom lines disappear.
U.S. President Donald Trump, who sought to make the caravan a campaign issue in last week’s elections, took to Twitter on Friday to aim some new criticism at the migrants.
“Isn’t it ironic that large Caravans of people are marching to our border wanting U.S.A. asylum because they are fearful of being in their country _ yet they are proudly waving … their country’s flag. Can this be possible? Yes, because it is all a BIG CON, and the American taxpayer is paying for it,” he said in a pair of tweets.
Migrant Ronald Calderon, who picked coffee beans back in Honduras, said he would seek asylum in the U.S. if he felt there was a 90 percent chance of success. But he figures the odds are long and doesn’t want to risk being deported, so he hopes to find work and settle in Tijuana.
“I see that Donald Trump talks about us as criminals and killers, and I don’t think an opportunity may present itself,” said Calderon, 23.
Andrea Ramirez, 42, said that her siblings were killed by gangs in Honduras and that she registered her name Friday to seek asylum in the U.S.
“The only thing we want is not to go back to Honduras,” Ramirez said.
Also Friday, another caravan set out from Mexico City heading toward the border.
Gastelum, the mayor, wondered why the migrants chose Tijuana instead of other Mexican cities on the U.S. border, vaguely suggesting a sinister plot without elaborating.
“There is an intention to do things badly. There is an intention to prejudice Tijuana, and we cannot allow that,” he said.
His comments marked a contrast to a more welcoming tone from other officials. Francisco Rueda, the top deputy to Baja California Gov. Francisco Vega de la Madrid, said Thursday that the state had 7,000 jobs available for any migrants who obtain legal status in Mexico.
Gustavo Magallanes, director of Baja California’s migrant attention agency, said Friday that the state is doing the best it can at a difficult time and that, nearing the end of the year, agencies at all levels of government lack funds.
The governor had also asked federal officials to speak to their U.S. counterparts about possibly accelerating asylum processing, he said.
Magallanes said the governor had not ordered that more migrants be prevented from arriving in Tijuana, but said state officials were telling people in the caravan they might get processed faster in the city of Mexicali because the list in Tijuana is so long.
Magallanes said it was “likely” the migrants could be waiting in Tijuana for four to six months. The state government plans to push them to regularize their immigration status in Mexico so they can be offered work.
He said he could not speak for Tijuana’s mayor but believed his comments had been misinterpreted.
“We are looking for the best way for these Central American migrants … to be able to be in the best situation in this state,” Magallanes said.
Publicado por salud equitativa en 5:55