The sepoys in Istanbul | The Indian Express

The sepoys in Istanbul | The Indian Express During WWI, Indian troops helped lay the foundations of West Asia as we know it
George Morton Jack

The sepoys in Istanbul

During World War I, Indian troops spread across the Ottoman empire, helped lay the foundations of West Asia as we know it 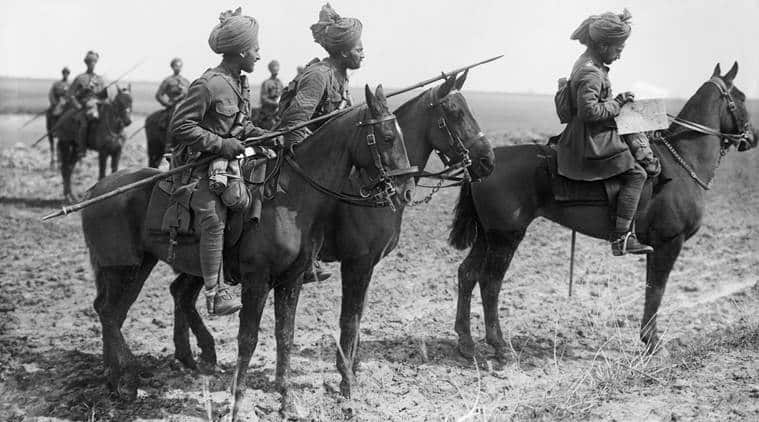 By November 1918, the Indian army’s immense grip on formerly Ottoman-controlled soil, where it had defeated the Turks, was reflected in the sheer size and breadth of its occupation. (Source: WikimediaCommons/By Ernest Brooks – This is photograph Q 2061 from the collections of the Imperial War Museums)
“The Turkish Empire has committed suicide, and dug with its own hands its grave”, the British prime minister Herbert Asquith, proclaimed in early November 1914. He was responding to the Ottoman naval bombardment of Ukraine, bringing Turkey into the First World War in alliance with Germany against the Allies.
“It is the Ottoman Government that has drawn the sword, and which, I venture to predict, will perish by the sword”, Asquith added of Britain’s war with the Turks. “It is they and not we who have rung the death-knell of Ottoman dominion, not only in Europe, but in Asia.”
The Indian army’s pivotal part in making Asquith’s prophecy come true has often been overlooked. By 1918, it was the principal military force of Allied conquest in the Middle East, making Britain the regional superpower when the First World War was won — and doing much to lay the foundations of the region as it is today.
When the Turks entered the war in 1914, their primary concern was fighting the Russians in the Caucasus. But they also had active plans against the British empire. They promptly gathered forces in Syria and Palestine to march across the Sinai Desert to invade British-occupied Egypt, and they launched a much broader strategic initiative: A holy war or jihad.
The jihad was declared at Istanbul by the sultan of Turkey, and it called on most of the world’s Muslims to rise up against the Allies. The intention was to multiply anti-Allied fighters in Caucasus, Egypt and elsewhere, whether among enemy ranks on the battlefield or local populations of the Allied empires.
The British decided on immediate military steps against the Ottoman threat, deemed essential to secure India as their British Empire’s prize possession. By the close of 1914, therefore, three Indian Expeditionary Forces had sailed from Mumbai to Egypt and Ottoman Iraq.
These initial Indian interventions in the Middle East dramatically escalated over the next four years at London’s behest, in the interests of British imperial defence and aggrandisement, and in combination with other Allied forces from Britain, Australia, New Zealand, France and Italy.
In the process, the Indian army with its British-made rifles, machine guns and artillery advanced against the Turks in an extraordinary range of operations great and small, blasting, bayoneting and bounding its way forward over beaches, deserts, rivers and mountains almost all around the Ottoman fringe.
To illustrate — in north-west Iran and the Caucasus, Indian regiments helped to block Turkish movements towards Central Asia. In central and southern Iran, they attacked suspected anti-Allied jihadists, and countered Turkish and German agents seeking to infiltrate sensitive Indian border zones. From the Arabian Gulf, Indian troops attacked hundreds of miles into Iraq, reaching its northernmost Ottoman province to seize the oil fields. On the Arabian Peninsula, they contained the Ottoman garrisons of Yemen, assisted Lawrence of Arabia and embedded like him in local Arab rebel forces, and raided Ottoman outposts on Red Sea islands. Then out of Egypt Indian units made multiple attacks, both westwards in the Western Desert against Libyan jihadists, and eastwards into the Sinai, Palestine and Syria. From Egypt they also took part in the Allies’ amphibious assault on European Turkey: The Gallipoli campaign.
By November 1918, the Indian army’s immense grip on formerly Ottoman-controlled soil, where it had defeated the Turks, was reflected in the sheer size and breadth of its occupation. It was the single-largest Allied force in the Turkish theatres, having deployed a total of approximately 7,60,000 Indian troops to them. Its men stood guard from Basra, Baghdad, Fallujah, Ramadi and Mosul to Cairo, Suez, Gaza, Jerusalem, Amman, Haifa, Damascus, Gallipoli and Istanbul. At the time, the British empire, in fact, approached its territorial zenith.
The Allied peace negotiations with the Turks were to last longer than the First World War itself. Their protraction was proof of their complexity. The Allies hotly competed for the spoils of Ottoman defeat: The British angled for new British-influenced Middle Eastern buffer states from Iraq to Palestine in order to cushion the Indian imperial sphere, while the French, Greeks and Italians looked to partition the Ottoman empire for new imperial possessions of their own. The Turks wanted Turkey for themselves and fought for it, above all against the Greeks.
Eventually, the Allies and the Turks signed the Treaty of Lausanne on July 24, 1923. In conjunction with other international agreements applying more widely to the Ottoman lands of 1914-18, the borders were drawn of the Turkish Republic and other post-war Middle Eastern states and European-administered mandates including Syria, Lebanon, Palestine, Jordan and Iraq. The map of the modern Middle East had taken shape.
The Indian army gradually evacuated the Middle East up to the late 1920s as the post-war settlements took effect. Having been a wrecking ball to knock down the Ottoman empire during the war, its place between the old and the new Middle East had ultimately been destructive — on behalf, of course, of the British empire.
Morton-Jack is the author of The Indian Empire at War: From Jihad to Victory, the Untold Story of the Indian Army in the First World War
Publicado por salud equitativa en 5:17