The march is a focus of debate about whether the conservative Law and Justice Party (PiS) party of government tacitly encourages groups with roots in the fascist and anti-Semitic movements. 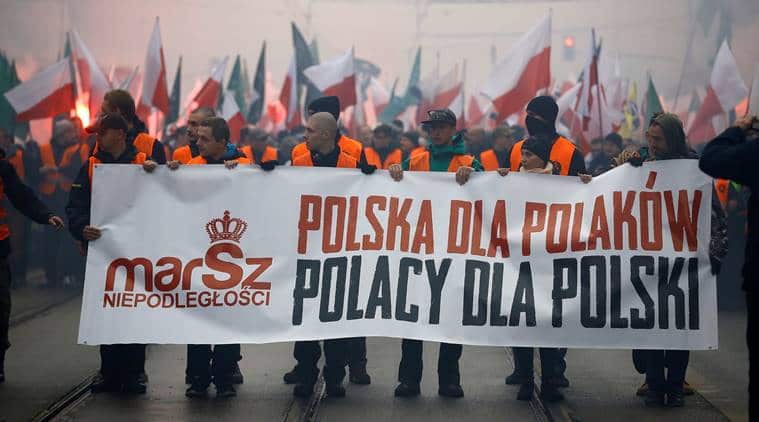 Protesters carry a banner reading “Poland for the Poles – Poles for Poland” during the annual nationalist march in Warsaw to mark the anniversary of Polish independence on November 11, 2015. (Reuters/File)
Authorities in Poland stepped up security in the capital on Sunday ahead of a march planned by eurosceptic leaders and far-right groups to celebrate a century of national independence.
The march is a focus of debate about whether the conservative Law and Justice Party (PiS) party of government tacitly encourages groups with roots in the fascist and anti-Semitic movements.
Last year, an annual march organised each November 11 by the far right for nearly a decade in Warsaw was dotted with racist banners such as “pure blood, clear mind” and “Europe will be white or uninhabited”.
The slogans fuelled concern about the rise of xenophobia in Poland at a time when other European countries are also grappling with a resurgence of the far right.
Warsaw’s city mayor sought to ban this year’s march but a court overruled her. The government then agreed with organisers after last-minute talks to hold a joint event to mark a 100 years since Poland’s 1918 declaration of independence after an 18th century partition by Russia, Austria and Germany.
“What brings us together is (Poland’s) white and red flag,” Interior Minister Mariusz Blaszczak told state broadcaster TVP on Saturday. “I invite everyone to attend.”
PiS says it rejects anti-Semitism and racism but critics accuse it of quietly siding with the far-right.
Since its election in 2015, the party has seen Poland increasingly isolated in Europe amid accusations of a tilt towards authoritarian rule. It promises more Catholic values and patriotism in public life and more state say in the economy.
The party taps into frustration with liberal values and anti-establishment sentiment that has galvanised far-right voters in other parts of Europe.
“Remember the shameful slogans of last year’s Nov. 11 march?,” centrist lawmaker Marcin Kierwinski said on Twitter. “A year later, their authors are meeting with the president and prime minister instead of a prosecutor.”
Prime Minister Mateusz Morawiecki said on Thursday any “extremist” banners would be eliminated from Sunday’s event.
The United States embassy in Warsaw issued a security alert ahead of the march.
The defence ministry said a military display including armoured vehicles would accompany the march, but said they were not part in any security arrangements.
Before the late-night agreement with the government on Friday to hold a joint event, organisers had said they expected the march to be the biggest far-right event in Europe in years.
Foreign participants who had confirmed their attendance earlier included Milan Mazurek, a Slovak lawmaker who once said on social media that the history of Nazi Germany and the Holocaust had been “distorted”.
On Nov. 11 Poles commemorate the establishment of the second Polish republic in 1918 from territory seized by its eastern and Western neighbours in the 18th century, made possible by the defeat of Russia, Germany and Austria in World War One.
Also on Sunday, world leaders gather in Paris to mark the end of the war.
Publicado por salud equitativa en 5:30